Me and the dark

by Maia Brown-Jackson 7 months ago in coping
Report Story

It's not all about death 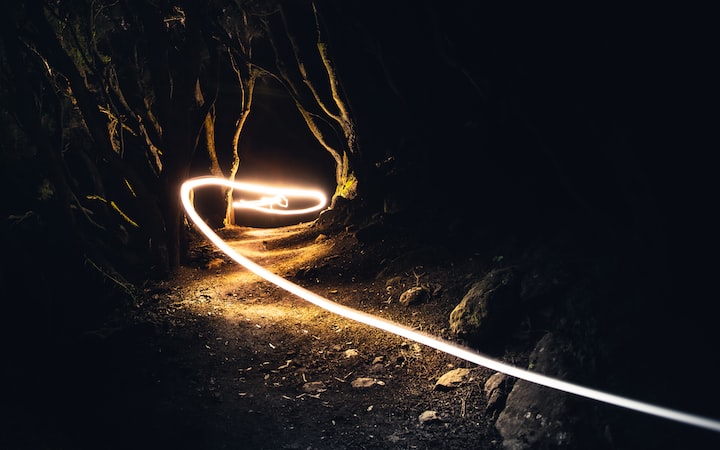 This is the story of a girl who was afraid of the dark.

This girl equated the dark with monsters, with the nothingness she’d been told came after death, with hands and claws always just out of sight ready to grab her. This girl believed in magic, and trusted her cats to watch over her while she slept. She knew when she was young that there was something different in her, but she didn’t understand. As she grew older she began to see the darkness, but it frightened her. She hid it deep inside and devoted herself to pouring out all the light and the magic that she could to everyone she touched until she was empty.

When she was hurt, she learned she couldn’t trust herself. Because she never forgot the darkness hidden deep within, but the men who violated her saw only the outside, the body she never quite understood. She trained her face to smile and appease, and she taught her eyes to threaten because sometimes that was what she needed to do.

The girl still feared the dark.

She said yes, and yes, and yes again, and it became too much. There was nothing left but that seed of darkness. That little piece of death. So she clung to it, and was told, no. This is not your existence. But this is your power.

But it scares me, she said.

I know, death replied. That’s because you think of endings, not beginnings. All you humans, so frightened of change, that you’ll slave away in misery just to keep the lights on. Because you can never see past the ending.

There’s nothing after the end, she said.

No, said death. There’s not what once was. But there is something new. Did you know you were barely created? That from the beginning, I intervened. Years and years it took to hold cells together long enough to have a hope of you. And then you tried to die when you were born. Your grandmother did the same. You both saw death young, but I showed you too much too quickly. Your grandmother, she ran while her family burned, and she never was the same. You though, you took the thousands of dead and held them inside, and let them change you.

They made me afraid.

You’ve always been afraid, because you are change, and change means never knowing what comes next. It means that all you’ll have, in each instant, is yourself, without forethought. Oh, you can prepare, you can formulate, but you’ll never have certainty, and that is not a burden that many can bear. You couldn’t. You wanted me to take you before, you called to me, and I refused. Because I knew that if you survived, that death inside you was not meant for you. That darkness meant endings in order for there to be beginnings. You saw death and pain and suffering and you were afraid. You were hopelessly violated and I thought you were lost forever. But when you came back, I knew I was right, all those years ago. You didn’t want to exist. You didn’t want to be born. So I left a piece of myself with you to keep watch.

You didn’t protect me, so what were you watching for?

Oh you little humans. I couldn’t stop the evil in this world from touching you. If you had asked again, after it all, for my hand, I would have let you come. But something had changed. You didn’t ask again. You said, I am going to kill this evil, and usher in something new.

The girl knew that death was telling her something she had always known deep inside. That she had been afraid of the darkness, that she had been afraid of the undiscovered and nameless, until the world showed her what was known. Death had watched her family for generations. It claimed many, marking the victims it left alive. And it had grown fond of her. Fond enough to tell her the truth: that she had the power of death, but that was never the power of nothingness. It was the power to create something new, and she was lucky enough to be one of the few who understood it wasn’t something to fear.

This is the story of how the world has fought against death very hard because it likes the status quo, and it is afraid of change. It has taught its humans to do the same, to fear the dark, to fear the unknown that may come. But a new age will dawn, and the girl will continue to rise, and she will say, I have seen evil, and I choose kindness.

More stories from Maia Brown-Jackson and writers in Psyche and other communities.