Champagne: Commodifying the women who built an empire

by Talia Nicole 5 days ago in feature
Report Story

Female Sexualization Rather Than Recognition 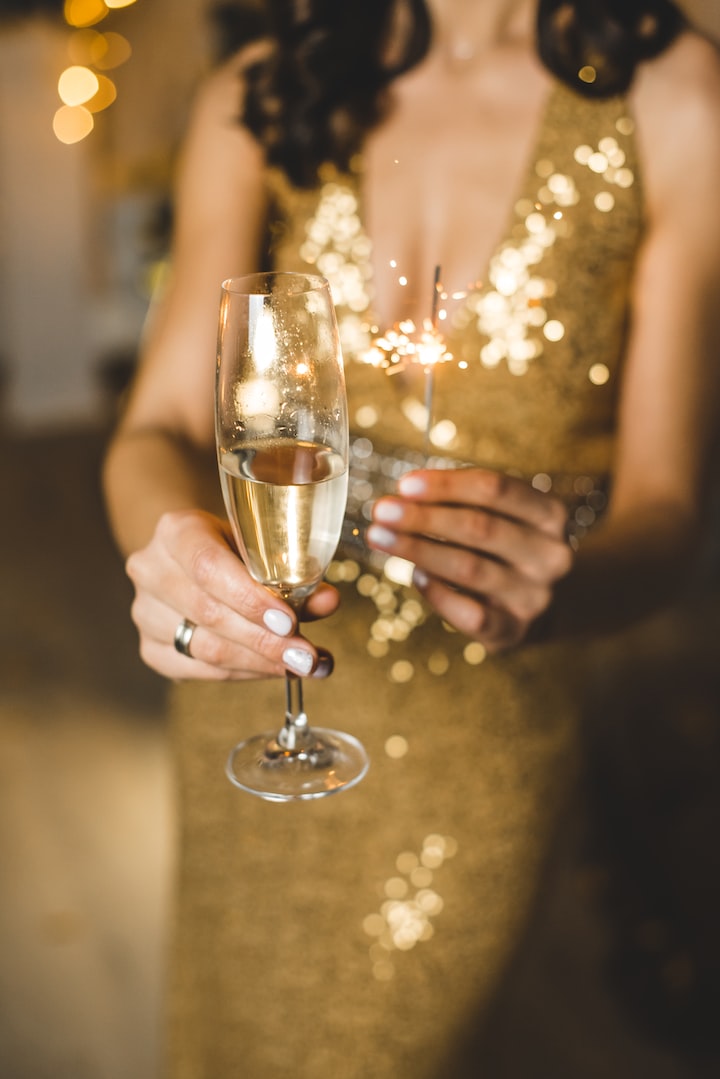 Photo by Kateryna Hliznitsova on Unsplash

"Come quickly, I am tasting the stars!" Dom Pérignon, the French monk (incorrectly) attributed to discovering champagne, is romantically remembered exclaiming this as he sipped on the effervescent beverage in the 17th century (Epstein, 2011). Pérignon was followed by many other men in characterizing the refined beverage that is enjoyed at celebrations all over the world. In thinking of champagne, one might, as Becky Sue Epstein reminisced in her history on champagne, imagine popular male characters like James Bond enigmatically sipping on champagne, or male athletes popping a bottle open in celebration. Champagne is a drink synonymous with starry skies, black cocktail dresses, and the flowery words on a page of an F. Scott Fitzgerald novel. He even famously wrote, "I'll drink your champagne. I'll drink every drop of it, I don't care if it kills me." It is universally accepted as a mood setter, an aphrodisiac as Catherine the Great was convinced (Epstein, 2011). It is recognized as a toast to celebration and accomplishment, Epstein (2011) writing, “champagne continues to be the beverage that signals special occasions and celebrations, no matter what the climate or the economy is like – in life as well as on screen” (p. 11). Historically, champagne has represented this idea of celebration since is acceptance in the 17th century, however, it has celebrated men and sexualized women despite the feminist champions who built the champagne empire as a whole.

Epstein writes that in the middle ages, wine was desired flat and bubbles were actually undesirable. Champagne was created by mistake because Champagne’s vineyards were too far north, therefore it was difficult to ripen the grapes before autumn’s colder weather. When harvested, the cold made fermentation of the wine die down, so the wine was prematurely bottled and stored in March. As the weather heated up in the spring, the yeast added to ferment the wine became active again. In the fermentation process, carbon dioxide is released, and when it was released in an already corked bottle? Bubbles were the result (Epstein, 2011). Epstein (2011) writes, “As early as 1516, sparkling wines were produced in the Languedoc region of southern France …This was over 100 years before the birth of Dom Pérignon, the man generally considered to be the originator of champagne” (p. 16). Though Dom Pérignon is famous for the “discovery” of champagne, you could argue three widows are more responsible for the champagne empire.

If you type “vueve” into google search bar, images of sales of Veuve Clicqout champagne come up. What it vueve actually means is widow in French. Madame Clicquot is known as, “the first great marketer of champagne wines” (Epstein, 2011, p. 39). After her husband died at the young age of 31, Clicquot did something revolutionary: she decided to take over her husband’s champagne company in 1805. She saved the industry, making it easier and more efficient to make champagne with her invention of the remuage technique. To remuage, bottles were hand-shifted a quarter turn each day, and slightly shaken. The bottoms of the bottles were also gradually lifted so the tops pointed downward at an increasing angle on a rack. Gradually, the dead yeast cells and any other organic matter slid into the neck of the bottle so they could be removed when the bottle was uncorked later (Epstein, 2011).

Epstein continues to chronical the accomplishment of widows in the champagne industry. Clicquot was the predecessor to another widow, Louise Pommery. Pommery is catalogued for making the first brut champagne, meaning dry and almost bitter. Ironically enough, Epstein (2011) writes, “at this time, wines were also marketed differently for different genders: women were supposed to drink the sweet sparkling wines of Champagne, while men were encouraged to prefer drier champagnes” (p. 48). Women were not even thought to drink the kind of champagne created by Pommery herself.

Finally, the third of the great widows of champagne appeared in the scene in 1941. Elizabeth ‘Lily’ Bollinger was also a widow who took over her husband’s company, consolidating the independent female stamp on the champagne industry. On Bollinger, Epstein (2011) writes:

one of champagne’s loveliest quotes is attributed to her, ‘I only drink champagne when I’m happy, or when I’m sad. I sometimes drink it when I’m alone. When I have company, I consider it obligatory. I trifle with it if I am not hungry and drink it when I am. Otherwise I never touch it – unless I’m thirsty.’ (p. 77)

Champagne was clearly a large part of Bollinger’s life, yet it is apparent that historically men are christened with champagne in celebration more than women.

It was a tradition, beginning with King Clovis who was baptized in the champagne hub of the world, Reims, for French kings to be crowned there and post-ceremony celebrate with the bubbly beverage. Above is an American sheet music cover/ad for Lily Bollinger’s very own champagne brand. It is palpable that champagne is being pictured as a very male-centric commodity, fueling patriarchy. The image of a king is center of the page, and disproportionately large compared to the champagne bottles that appear to be his subjects. In this image, champagne has been popularized by a woman’s name but commodified for a powerful man’s pleasure.

Outside of exclusively kings, champagne has also had an entangled history with male soldiers in several wars. Even during Clicqout’s time during the Napoleonic wars, Epstein (2011) writes that Clicqout walled champagne alone wine cellars through war period to avoid pillaging. She even famously made the risky business decision to send an abundance of champagne to Russia even before peace was declared, that way there would be celebration in the event of truce. Again, champagne is historically being used to celebrate the accomplishment of soldiers, a group that women were not included in. This pattern continued into the 20th century as Winston Churchill famously declared, “Remember gentlemen, it’s not just France we are fighting for, it’s champagne!” Similarly, Eisenhower signed a peace treaty in Reims, symbolically linking backing to those French kings who so delighted in champagne. In all of these cases, champagne was marked with celebration, but also male dominance and power.

After World War II, the phenomenon of champagne being used for a celebration of men remained. However, there also was an insurgence of sexualizing women through the champagne market. To illustrate the overall dynamic of a situation where champagne was enjoyed, refer to the image below. Taken c. 1950, it is clear through this image that the man is pouring the beverage and has control. The man had several glasses in front of him, and the woman is only holding one, still full, and has a cigarette resting between her fingers. She appears to be his ornament that he has the pleasure of delighting with some champagne.

A few decades later, in 1988, L’Instant Taittinger, another champagne company, came out with an ad as a tribute to Grace Kelly. Post Kelly’s death, this advertisement for the beverage has a nostalgic 1950s feel, when the actress was at her peak. The ad below, now commonly bought and sold as a vintage poster, makes Kelly almost one with the beverage as she merges with the image of a full champagne glass. Her curves and dress seem to match up with the shape of the glass, almost as if Taittinger is serving her female body to consumers.

Perhaps the most disturbing of all is the recent champagne market and its sexualization of women. According to Epstein (2011), champagne was originally served in a cone shaped flute with no stem. This evolved into what we now associate with champagne drinking: the coupe. The coupe is a shallow stemmed glass than fans out on the top into somewhat of a triangular shape. This triangular shape is meant to mirror that of a breast, originally a noblewoman of the French court, perhaps Madame de Pompadour or Marie Antoinette. Centuries later, this still has not changed. In 2008, Moët et Chandon commissioned the famous designer Karl Lagerfeld create a champagne glass for Dom Pérignon (a high-end champagne brand), based on super-model Claudia Schiffer’s breast. Pictured below, it is palpable that the champagne market was stabilized by the three widows, but is now reliant on the popular image of a woman in a sexualized form.

Even more recently, Kate Moss, in order to celebrate her 25-year modeling career worked with a restaurant to create another coupe, this time modelled after her left breast. She told Vouge, "champagne is always associated with celebration and happy occasions and I had fun creating this beautiful coupe” (Kilcooley-O’Hallaran, 2014). Champagne is always associated with celebrations, and apparently also the female breast and sexualized body.

Overall, champagne is a beverage that has been cultivated by strong, independent female characters. Clicquot, Pommery, and Bollinger all contributed to what we know as champagne today. Despite this truth, historically champagne has celebrated men and now, through marketing strategies, sexualizes women in conjunction with the drink as a commodity.

More stories from Talia Nicole and writers in Proof and other communities.