Songs that helped me feel pride

by Sophy Geno 4 months ago in Pop Culture

This is a collection of bops that helped me find myself and new songs that make me feel pride! 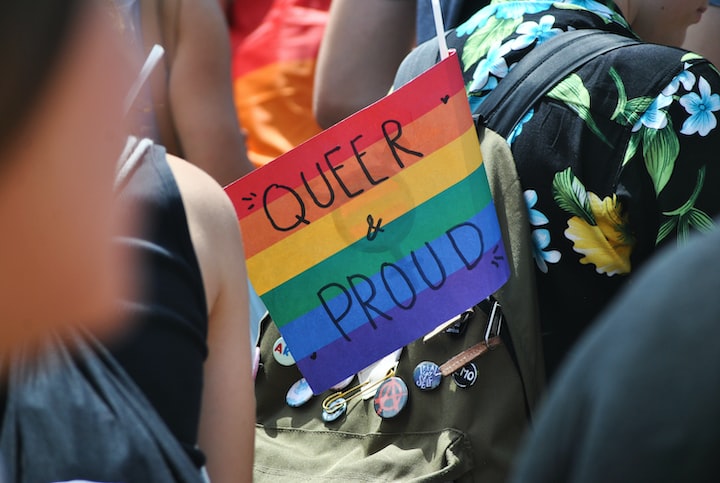 Ever since I was young, I had a great love for music. In fact, one of my biggest fears as a child was that the world would run out of new songs and that creativity would cease. Thankfully that fear was unfounded! To this day, music is such a big part of my life, I even dream of becoming a lyricist and co-producer. One of the reasons I am so passionate about music is because when I felt alone, the music of artists like Fall out Boy, Lady Gaga, and BTS was always there for me. The reason I accept myself this much today is thanks to the messages I heard from musical artists. I and many others found solace and truth in the fact we were born this way. So, in this playlist, I want to list new and old songs whose iconic presence shaped my life, gave me confidence, and helped me find community.

First up is a newer song from the artist Rina Sawayama. With this song, Rina blended pop and alternative sounds, and it's become known as her coming-out anthem. The song itself is very upbeat and bright, although her lyrics express some apprehension about her feelings towards a girl. One lyric from the song is,

"Even though I'm satisfied, I lead my life within a lie. Holding onto feelings I'm not used to feeling, 'cause oh, they make me feel alive.".

I could also personally relate to this song since it took me some time to accept that I wasn't exactly straight and often has crushes on girls. The way Rina sang this song also gave me a lot of comfort since it it bubbly, colorful, and positive. Not to mention her music video is super artistic!

This one is a throwback to the golden days of disco. Disco is very sacred within the queer community since it helped so many LGBTQ people in the past. Although it might not seem to make sense to people outside of the queer community, disco music really helped shape the essence of today's LGBTQ identifiers. Disco was in its time, a thing of rebellion just as being queer is. Many groups tried to shut down disco clubs because it was a place where everyone could have a good time and party in a carefree environment. This song, in particular, really helps me get my groove on and reminds me of how important the disco era was in history. The power of disco music was so strong the "disco sucks" scheme was made to try and stop its power. But we all know disco does NOT suck. It is about love and groove! And "Love Come Down" is the perfect example of the infectious beats that make us move and groove no matter who you are or who you love.

The queen herself, a true icon of the queer community. Lady Gaga has countless songs that represent queer people, but I picked this one to show as it is a personal favorite. This song became especially empowering for me while I was overseas in a country where queer liberation still hasn't become mainstream. When I would feel a little awkward or shy, I would listen to this song and be reminded that I should be confident in myself. Although I am capable of "straight passing" in everyday life, I never wanted to feel like I'm dishonest to who I truly am, a young queer person with a bright future. Lady gaga's G.U.Y always gives me a confidence boost due to this song's sheer power vibes. Whenever you feel meek, crank up the volume on this song and strut out into the world!

Hey Kitty girl! It's your world!

Another Icon of the LGBTQ community is, of course, RuPaul! I am a Drag Race fan myself, but even if you aren't, this song makes you feel like a queen. This song's video and lyrics are full of charisma, uniqueness, nerve, and talent. Over the past year, I have become an extreme consumer of drag content, and with good reason. Personally, Drag Queens embody the amount of confidence, glamour, and admiration I often find myself craving. But one of the most important things I have learned being a fan of drag is that everyone is unique and stunning in their own way. Many drag artists even say that drag is their mechanism of coping with depression or self-hate. Meanwhile, other queens will always slay the day away with self confidence and style. Either way, drag queens have helped my self-confidence immensely!

Hayley Kiyoko has blown the minds of many with her artistic and undeniably catchy pop songs. The songs on her Citrine EP are no exception. I remember being 17 years old, not 100% comfortable being queer, and jamming to this song aggressively when I was alone. The alluring guitar, along with Hayley's sultry vocals, makes this song so striking to the listener. When I heard it for the first time, I was sad they never play it on mainstream radio. At the same time, this song was my little secret. Hayley Kiyoko has many amazing songs, especially relating to LGBTQ culture, but I will never forget how nice it felt when I first her say,

"I just want to tell you that you're really, pretty girl

And I'm sure when others listen to this song, they will feel a blush rise to their cheeks as well.

As an avid Kpop fan, it is uncommon yet not totally impossible to find songs with queer elements in the Kpop world. Although the company that manages Loona never specifically said this song was queer, they did not make it hard for fans such as myself to declare it an LGBTQ song. The lyrics of this song are gender-neutral; however, the music video is not! The beats of this song are what we call "bubblegum Kpop" styled with extremely upbeat and fast-paced tempos. While the beautiful music video features Chuu and fellow Loona member Yves in one-sided love. Luckily, by the end of the video, Chuu and Yves celebrate and feed each other strawberries, although we do not know if it is real or just Chuu's imagination. Either way, we love it! And this song is a rare representation of the LGBTQ community within the world of Kpop. Chuu, you attacked OUR hearts.

These songs are the tip of the iceberg when it comes to queer representation in music. For that, I am extremely grateful. This pride month, let's turn up the tunes that make us feel seen and proud! ."

Receive stories by Sophy Geno in your feed
Sophy Geno
Read next: Who am I to Call to Arms no more