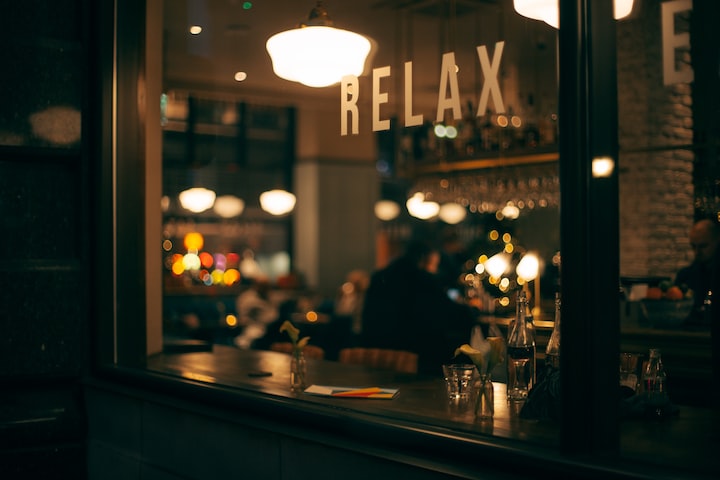 It’s been three years since Angela last saw Jamie. She slides the saltshaker from her left hand to her right and glances up at the door.

She’s still in her work clothes – a thin turtleneck tucked into high-waisted dress-pants, made slightly more casual by the jean jacket that she’s thrown on top. Sniffing into her shoulder, she finds her office-masked-in-perfume scent actually quite pleasant.

She catches a glimpse of herself in one of the café’s many decorative mirrors hanging on the wall, remembering the time someone called her unintentionally attractive on a day when she was very intentionally aiming for attractive. The server comes over.

Can I get you anything while you wait?

A glass of water would be great thanks.

He turns to walk away.

Actually, do you serve chocolate cake?

She’s picked somewhere close to Jamie’s hotel, a hipster café in Toronto’s East End with table service and all – a place equally as appropriate for a business meeting or a first date.

She likes the casualness of it, the low murmur of conversation punctuated by laughter – it impresses an ease that she isn’t quite feeling on the inside. She takes a deep breath and wills the hanging plants in the window to give off more oxygen.

A bell rattles faintly as Jamie walks through the door. She’s already seen Angela from the window, and a smile is spread across her face. Angela waves anyway.

Angela stands up, her thighs lightly knocking against the table as she pushes the chair back, and steps around the side. Jamie pulls her into a hug. She holds on, releases, then steps back still holding her by the shoulders. She pulls her into a second hug. Two hugs.

Did you find this place okay? I’ve never been, but seems nice? When did you get in? Angela asks.

It’s perfect. And just last night. I can’t believe it’s been three years! You look so lovely and autumnal. The seasons aren’t quite as distinct in England, as you know, Jamie says.

The word autumnal sounds sweet on her lips in her pronounced south London accent.

Oh thanks, I was going for post-work chic but ended up looking like a back-to-school Gap commercial, Angela says.

Jamie laughs. She unwinds her maroon scarf sweeping her blonde hair from one shoulder to the other.

I’m not the girl who lives out of a backpack anymore.

Yes, you’re bougie now. Well, I’m honoured you made the time. She bows her head and circles her wrist, gesturing a curtsy. Her sarcasm comes as naturally as the rain.

Angela rolls her eyes playfully and feels her body relax. She’s relieved but not surprised by Jamie’s ease – she has a natural warmth about her that is both comforting and magnetic.

Glad we can just jump right back into it, Angela says.

Where do we even start, says Jamie as she furrows her eyebrows and gives the slightest shrug.

The server sets down two glasses of water and a slice of chocolate cake.

They work their way through the cake, forks clinking as they each get closer to the centre. They don’t want the evening to end, so they eat slowly and when they finish, they order another, just like they had on their first date almost five years ago.

It’s comfortable being together again – like slipping on an old pair of sneakers when everyone’s telling you to just get a new pair.

They stay at the café until the latte menu is replaced with craft beer. When the café closes, they go to the hotel bar. And when that closes, up to Jamie’s room.

A shrill ringing makes Angela jump from a deep sleep. Jamie sits up in the king size bed and reaches over her for the phone.

Good morning from the Hilton, this is your 7am wake-up call.

Jamie groans and slams it down. She dramatically falls back onto the bed pulls the sheet up over her head. Angela laughs.

There is literally no worse way to be woken up, Angela says, the ringing still piercing her ears.

Jamie laughs and pulls the sheet down back down, exposing her face again. She props herself up on her elbow and leans in close to Angela.

What about hungover in bed with your ex?

Let’s try again, Jamie had said last night as they threw back another drink. We're not kids anymore.

But it had hurt them both so much last time.

Angela gets up and starts to dress quickly.

I guess I should let you get ready for your conference, she says.

Jamie’s face falls. She gets up and slips on a hotel robe.

Of course, Jamie says. And what about you, is your work far from here?

Angela kneels to lace up her boots. She does it slowly as she tries to navigate the previous night in her head. She doesn't think she'd survive having to get over Jamie twice. She stands up to leave.

And your flight leaves?

So this is goodbye I suppose.

More stories from Katherine Lee and writers in Pride and other communities.