Kangaroos and Opossums Too

By E.L. MartinPublished about a month ago • 4 min read
2
Share 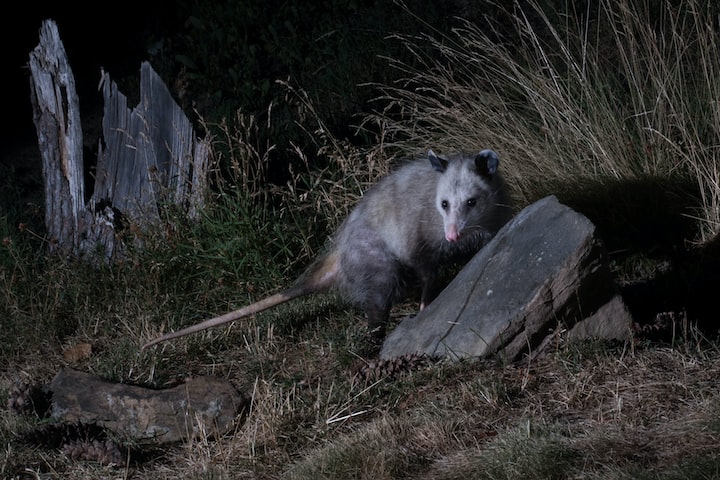 Photo by Jack Bulmer on Unsplash

A reoccurring nightmare I had as a young girl

Involved an old building, and still makes my hairs curl

Too afraid to approach, but proceeded with fright

Oh, how I hated Dad’s decrepit building at night!

The nails all protruded and the boards twisted up gnarly

But it was the sound, a deep growl that was ever so snarly

I covered my eyes as I headed up the ramp

Its incline was mossy and ever so damp

I feared I would slip, yet tried as I must

To pull from that building a tool covered in rust

I questioned whether the tool was truly needed

Still, I knew I had to obey his orders

I furthered myself both onward and forwards

I swore to myself and told him aloud

That there was a monster in that building; this I vowed

He insisted I was crazy; there was nothing in there

It was merely my imagination; a thought made from thin air

I stepped into the building, and it came into sight

A giant hairy creature that filled me with fright

Its eyes were bright yellow; its hairs long and brown

With a garbled growl of a voice it opened its mouth

Its teeth were sharp and shiny and highly pronounced

It grinned evilly in the dark of the night

The only thing glowing was its eyes with delight

But it was too late I was already inside

The monster had seen me, and this I knew

In its garbled voice it told me, “I’m going to eat you!”

What was this creature that lived in this place?

Was it fast enough to catch me if it chose to chase?

I knew it would surpass my speed easily if it tried

It had large feet and springing legs too

My young little self had no idea what to do

Would I be eaten, and this be my end?

Or would Dad come after me, and find a way to defend?

Would I be devoured in the monster’s tummy?

While it muttered and moaned about how I’d taste yummy?

While I contemplated, the creature before me grew

And I noticed it resembled a mutant kangaroo

Should I be afraid of this creature so hairy?

How could it make its home down here?

Aren’t they native to Australia? I’m nowhere near.

Surely it didn’t escape from the zoo

Couldn’t it have eaten me by now if it really wanted to?

The stronger your fear grows, the more delectable you’ll be

Right now your flesh is not tender enough for me

The monster cried, and I looked down

A dog of mine stood on the ground

Ready to pounce and ready to maim

It was ready to defend its master’s name

Afraid no longer; I with my dog

Instead of the dark, I looked to the fog

We can do this! I said and I cheered.

I realized I had nothing to fear.

When my dog attacked, the creature was torn to pieces

Its garbled threats turned into wheezes

Sometimes I still awoke with fear and with dread

If I woke up before that monster was dead

I forgot whether or not I had gotten Dad’s tool

But, Dad often told a story of the dog he thought was cool

It wasn’t a kangaroo or a mutant of sorts

That our dog saved me from on that building’s floorboards

He said I was little; no older than two

When our dog “Rat Dog” really pulled through

I was sent to the building for something in there

And an opossum came out and gave me a scare

It was a rabid creature; full of disease

And ready to do with me as it pleased

Thankfully “Rat Dog” followed me there

And provided protection; my life he did spare

So whether this nightmare I had on repeat

Had roots from our dog’s heroic feat

I’ll never know, but it’s up for discussion

After all, an opossum is a kangaroo’s distant cousin

More stories from E.L. Martin and writers in Poets and other communities.