by H. Jacob Sandigo 6 months ago in art

Each citizen, a cell within the mind of San Francisco

4 AM tends to seduce the soul, instructing it to step out of the body, and examine what lies beneath the bone. The city has become a recluse. Neon euphoria still shines bright, but the cabbies and nightlife enthusiasts have returned to hibernation. All that remains is the tangible totems of consumer America and sidewalk tenants.

San Francisco's pavements have epochs etched in them, hard to see through the shit and piss that pollute a city in retrograde. Money and techno-real estate continue to amplify. The citizens are thrown together and converged into indistinguishable data. Words like 'unique' and 'culture' are, but old tags that have faded from consciousness.

Advertisements are hurled at me, even the blind can't evade this programming. The subconscious has an addiction to stimuli; it is a full-time junkie. Sleep still pumps it full of energy. We are the fuel that keeps this chaos going.

Downtown is a hundred degrees. Hell is a construct, but I may be witnessing it now.

We have successfully impregnated the city

We are not fit to raise this beast

We might as well border ourselves in, and self implode in peace.

An optimist always makes me smile.

They remain untouched by demons.

Their innocence is what we should smoke, not these chemicals that ensure every self-portrait resembles Van Gogh's ear.

I make my way to the pier. The seals' huff and heave in unison. An amass of shadows awaiting our departure. What would they do with all these coffee shops and boutiques? Maybe there would be a Ralph Lauren among them who breaks from the social norm, and opts to wear a bra with an image of a horse riding a man. I grab my knife and carve a Nirvana-like smiley face on one of the wood planks.

This world is a canvas, all of us could be individuals, yet we continue to clutter the earth with reprints.

Decayed dreams float in the ether until they decided to turn to downpour and weigh down each set of feet attempting a purposeful life.

When guns add bullets to the rain, it is no random act of violence, but condensed hatred. A path that ensures that one person's failure will never become the success of another.

The architecture around me holds history, but we treat these buildings as a certainty. The earth could swallow them at any moment. What information would we lose?

A pigeon lands on my shoulder and picks at my hair.

I have not, in fact, escaped reality.

This allusion returns once more.

The city was never a city.

This is the dream within the dream.

Eyes are open, but we will never truly wake up.

Earpods and excess will induce insomnia.

We have always been hybrids.

Half zombie, half human.

Fast forward a few years, and we will be robots.

Sex and drugs will be obsolete.

Populations will be mass produced like the modern mind.

I haven't slept for three days.

Colors are more of a pastel.

There are trails of energy within each object.

Nothing stays in place.

Inevitably I will turn the corner and see my reflection in all representations of matter.

My last girlfriend was the Mona Lisa.

I never could get her to crack a smile.

Even when I called her 'fine' art—stone face.

Much of my peers are manikins.

At this point in the story, the narrator could be 'me' or one of the infinite. My mind houses libraries, and not all of the authors have made themselves known. Some play tricks on me, and get off when I self-sabotage. Others ignite me with a drive that wishes to see success and fulfillment, a higher self in search of a higher power.

My friends are a mix of winos and philosophers, each sees life in a calculated lens. They will debate for centuries. This humors me. For at the end of all this nonsense, they will be scratching their heads. Why this opposition when we were one and the same all along? Not clones but in synchronized pursuit of something more: truth. An understanding of self. The human odyssey for those whose minds were driven to alchemy.

I grab a marker from my pocket and tag along the Transamerica building:

EVOLVE OR ERODE IN ALLUSION

This is not a call to action but for my own sanity.

People will follow the credo of pop culture, not of their own interworkings.

God is a billboard.

God is a hashtag

God is the latest sex tape.

My last friend was turned into Pinocchio for Disney's live adaptation.

He was taken to the dungeon where Walt's head resides and thrown into a furnace to be reincarnated as a puppet.

I miss our Sunday's in the Mission.

Instead of going home, I walk to Burger King, where a seance is being conducted.

"We could use you. What's your blood type? Do you eat lamb?"

When they find out I'm vegan, they decide to throw ketchup packets at me and hiss like serpents.

The city is getting ready to open for business.

I must make my escape.

My soul shakes my body, which is lying across a park bench.

It dusts off the needles and vacant bottles before jumping back in.

I throw change into a store and am presented with an espresso from the Amazon.

With this sort of fuel, I can conquer all.

I head to my office, the history section of the Main Library amidst desolate angels and sages sedated by syringes. 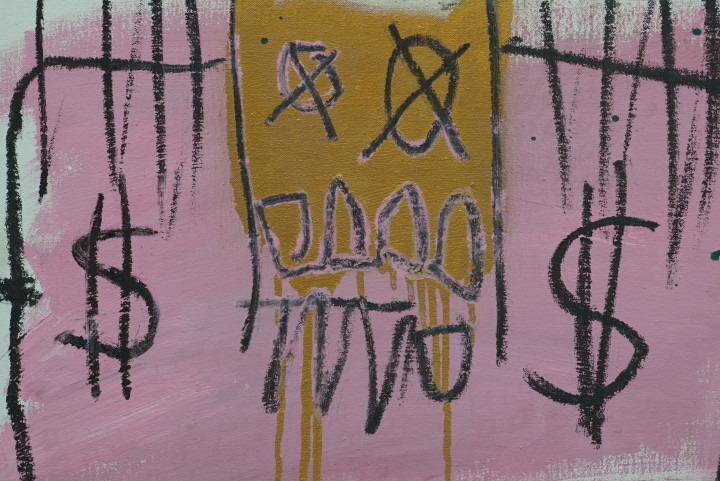 Documentation of a never-ending epic.