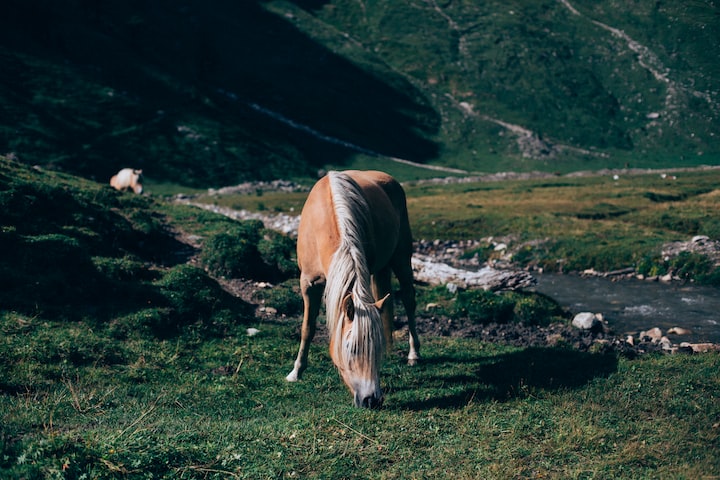 Photo by Volkan Kaçmaz on Unsplash

It stood there at the edge, then stared at me and blinked

The horse would never neigh

The donkeys would always bray

The quiet horse had taught me to allow an ass to speak.

Now the horse was a gift

So I opened up its lips

When I saw the rows of teeth

Were pearly white and neat

I wondered why to the water it did not bow down to take a sip?

From the water it turned and walked away

It picked me up in its saddle, wanting me to stay

He bent down to take a drink, and I did the same, along the water's edge we stood atop the river's clay.

The water was so fresh

Its taste was the best

This horse knew the best place to drink

By remaining quiet it allowed its actions, and not words, to speak

Surely the water here was at the top, there is no contest.

From the saddle's sack it handed me a pan

It placed the riveted bowl in the palm of my hands

The horse looked to me, then the water, and did a small neigh

He wanted to show me that there was something unique about this land.

I dipped the pan in the water, ready for the cold

This land was prosperous with resources since days of old

Tall grass, wheat, fruit trees, and all sorts of wildlife

The land was so fertile, I'm surprised that there was no midwife

Spinning the pan around, draining the water, I found small bits of gold.

Nuggets of gold is what the horse lead me to

A river of life holding pearls of wisdom too

For I had waded into the river and found several mussels

They bestowed upon me their wisdom, for it was what I wanted to knew.

After refreshing my thirst and purse with treasures

The horse carried me away at its leisure

It brought me to an area that was near

Stalks of corn with bountiful ears

There we started to eat to our pleasure

Like nuggets of gold, here there were kernels of truth

Lessons I as a kid could not understand in my youth

We have one mouth to speak, but blessed with two ears

Yet the corn does not speak, so all it does is hear

Then filtering out what's true, it puts in its fruit, only the goodness that we eat away, chomping at with each and every tooth.

Feeding on truth that was grown by the sunlight, earth, and became starch

With a skin of fresh water, we would wash it down when we were parched

It would lead me over to the mud with the pigs

For we would have to lead them on a march.

Their pen was always dirty with mud

Never dry dirt, like there was always a small flood

I was told not to play a pig's game, as they'll want you to roll with them in the muck

Getting out is the worst part, most times you'll just end up stuck

But there are other ways a pig can boil your blood.

I opened the gate for them to follow me, they begun to whine

It was time that we took them to the river, so I began to lead

I never lost an animal and neither did my steed

The march began as I was followed by the swine

We lead them to the river, as they drank they began to dine

The mussels in the river they had come to find

Yet the pigs had no use or value for their pearls

Even as generalist, they began to hurl

Wisdom was not for them, never put your pearls before swine.

Now some of their teeth had gold

They flicked out the specs with their tongues

Huffed out deep breaths with their lungs

These nuggets of truth the pigs would not want to hold.

Now we took them to the field of corn

Yet the pigs ate the ears with the stalks, dirt, and roots

They ate everything, and not just the golden fruit

As generalists, for them this was the norm

We led them back to their pens for the day

There they began to roll again in the muddy, sloppy, clay

Pearls of Wisdom, Nuggets of Gold, and Kernels of Truth today we did find

Listen, learn to follow and lead, take heed, that is all I have to say.