by Jillian Spiridon about a month ago in heartbreak 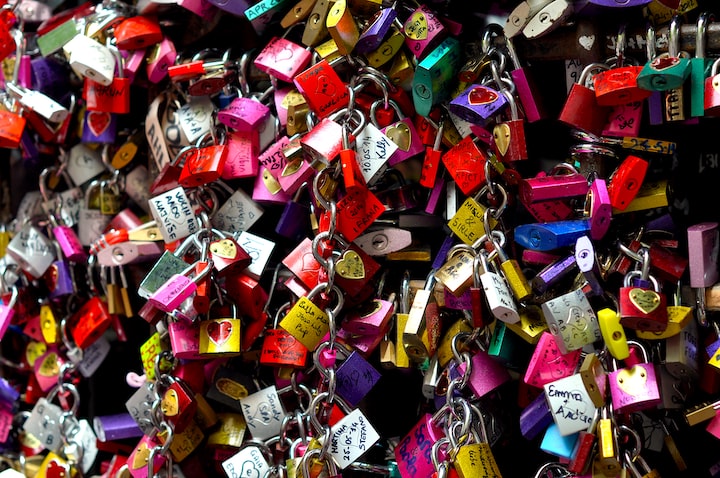 Photo by K Fraser on Unsplash

It was easy enough to put the lock among the others—

so many names, a richness of history and relationships,

one of the few ways to immortalize a love for evermore—

and a permanent marker to inscribe the names of her parents.

It was a last-ditch effort, a fleeting hope in and of itself,

who had brought her into this world twenty years ago.

As she found a place for the lock, she found herself tearing up

because love was supposed to last beyond a fair weather scheme.

become so vicious to each other that they couldn't share the same room?

Eva had avoided the battleground because of college, the seams splitting,

and even the last-minute trip had not saved her from the wrath of the war.

Her parents, once so loving, had the divorce papers ready to sign.

But was it only a matter of time, or could old magic intervene?

It was silly, hoping the lock would work, but it was Juliet's spell.

One day, Eva might come back to this place and find the lock still intact,

The American girl put her hands together and asked for a sign,

anything, that might salvage the wreckage of her parents' love.

But even old magic could run dry, or so she was thinking

when she arrived back home to find her father had moved out.

Her mother, though looking tired and thinner than before,

seemed to be relieved even as Eva pleaded with her to reconsider.

But no, her father had hammered down the final nail when

he admitted he had been having an affair for a year's time.

There was no going back after that, no forgiveness, just hurt,

but Eva saw a different kind of magic begin to take hold.

Her mother started dating again, slowly, until she met an art teacher

who made her laugh like back in the days when Eva had been younger.

And Eva's father started a new family, bringing into the world

the little brother Eva had never thought she could have wanted.

Though her parents were happier than they had been prior,

Eva still wondered why the magic had not worked as she had hoped.

And as years drew on and relationships came and went, she realized:

love was so much more than she had thought in her younger days.

Strange, really, that she had once thought Romeo and Juliet

were a couple to be looked upon with reverence and respect—

when they had just been two kids who hadn't really known real love.

but passion without suffering or strife to go around.

Juliet's prayer was for love that lasted, perhaps, but also

for the love that did not need to persist until death did they part.

If you enjoyed this poem, please leave a heart before you go! I also have more poetry and other writings over on my profile page. You can also find me on Twitter if you'd like to chat writing or Vocal in general. Thank you for the support!