Crystals of the Night Sky

by Cosette Alize 2 months ago in nature poetry
Report Story

an experiment in Spenserian Stanza 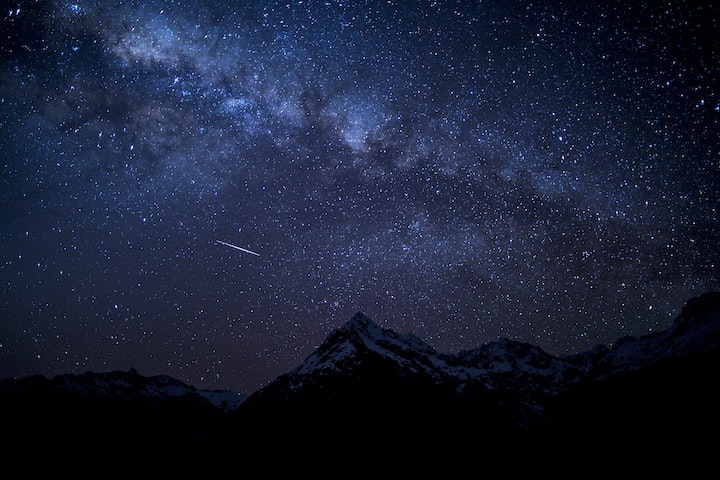 Photo by Phil Botha on Unsplash

The fire blazed with wisps so bright,

‘Joy to every soul that comes,

To all the dancing dames’;

The steady beat of the drums,

A gentle lute, it strums.

Great feasting had commenced at dusk,

Immense barrels of drink were brought,

Partners for dance were sought,

‘I will be chosen,’ they thought;

Every lass excluding one,

Who hardly care a jot,

She declared she’d dance with none,

For this lavishness was drunken.

This pleasure that the world supplies,

It leaves a vacated space,

For by no means it satisfies!

So up up from that place,

With gentleness and grace.

The youth observed a yonder slope,

Where she may escape and cope,

To take a breath and not to mope.

That hill she did ascend,

Without regret towards that feast,

Her heart began to mend,

The cheer inside increased,

As she gazed unto the east.

Behold! The heavens above!

All fear has now forever ceased.

The sparkling tapestry of love,

The crystals of the evening sky,

Priceless as the finest jewel.

Far beyond, in the heavens high,

Not excluding those most cruel;

The earth’s riches are but futile,

Give ear unto the song so tall,

The maiden was stricken with bliss,

The constellations as a lapidary’s piece,

‘My soul, who founded this?’

She declared with wonder and peace,

All thought of that wretched vanity released.

‘Oh Creator of all, what marvelous birth!

May Your endless joy never cease.

Oh, Maker of heaven and earth,

How vast and confounding is Your worth.’

‘He who made Cygnus and Sagitta be,

Who adorned the night with plenty.

Why does He think on me?

I, who is conceited and empty.

Whose transgressions are uncountably many.

Yet He has graced us with pleasure,

When we do not deserve any.

Oh God, you give and give without measure!

You are the true hidden treasure.’

‘Throughout this earth there is hidden,

Seeds of the Most High sown.

By no means are these riches forbidden.

But to those who seek they are shown,

Yes, Creation itself, it moans.

Paradise revealed for the one who would see,

Those refined in the heart and atoned.

Now I observe that it all points to Thee,’

And weep tears of joy did she.

When all the maiden’s tears were gone,

She stood upon her renewed feet.

Now, the very place from which she’d been drawn,

She felt that she should meet,

The praise of the Creator repeat.

With confidence on her softened brow

She dared not to retreat

In her very soul, there was a vow

Her hands were ready at the plow.

The festival guests overwhelmed with surprise,

Greeted the returning lady with cheer.

But something had altered in her eyes

Though it was not quite clear

Those gluttons felt they should fear!

Merely with grace, she invoked them,

A sight more precious than a gem!

You will see! You will delight in Him’

An individual lavishing in the excess drink

Spoke with words quite oblique.

‘Fair miss! Do you scarcely think?

Of what treasures do you speak?

They do sound quite antique!

No no, not today, I will enjoy myself here

Return and enjoy with us O’Lady Mystique.

Be not so severe!’

He concluded with the raise of a beer.

The youth received the reply with a frown

Her soul heavy laden with their doubt,

Knowing they would not come around

And proceeded on her route

So those peoples forgot the lass,

They continued in their lust devout,

But she, was contented in the grass,

Where all of time, without notice, could pass.

I write stories, because I live a story. No fantasy world will ever compare to the one we live in. I want to describe our world in a way that reveals the Creator's magic, and write fantasy world's in a way that illuminates our reality.

More stories from Cosette Alize and writers in Poets and other communities.