Why Is It So Hard To Adopt A Dog? I Don't Know, But I'm Done With Pets Because Of It.

No, it's not for "the best interest of the pet." That's a lie, and it's time we talk about it. 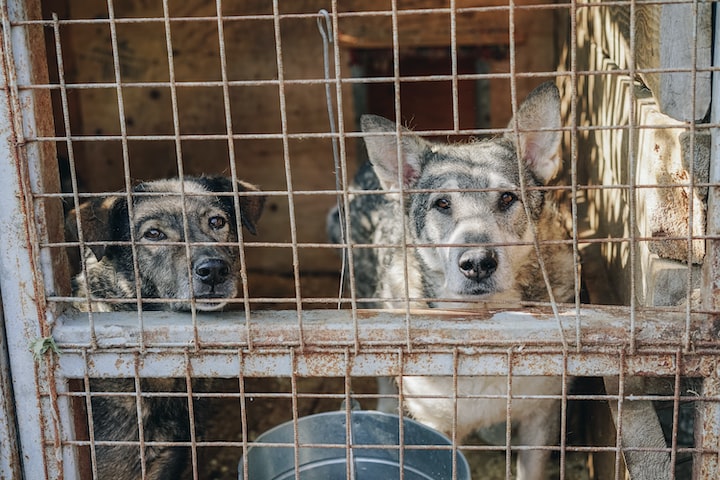 Photo by Sasha Sashina on Unsplash

I remember reading about all the horrible things that dog breeders and puppy mills do. Immediately, the banned of #adoptdontshop became ingrained in my mind. So, when I decided to adopt an ESA, I figured it would be the easiest thing in the world. After all, I'd be doing a good thing, right?

I immediately reached out to a bunch of rescue agencies and filled out applications. None of them got back to me. I poked, and prodded, and got some answers. At first, the agencies were ready to get the dog to me but things always soured at the last minute.

Someone had the nerve to ask me, "What if those dogs don't need you?"

I was done. Fine. No more dog. We're all happy now, right?

For people who claim to care about animals, they did a great job of making me decide that I never want to associate with any animal rights group again. I no longer want to even be around dogs because people made me feel like a puppy killer for trying to adopt a pet.

It shouldn't be this hard to give a pet a loving home. I'm an adult. I pay taxes. I have my own place. I'm married. If I were to get pregnant, people would be elated. So what the hell is going on?

The first thing that I learned about dog culture is that people often use dogs as a status symbol. This is especially true about rescue pets. Rescue pets became fashionable because, oh, this person saved a life! They must be great people!

I've had animal rescues tell me that I was wrong for X, wrong for Y, then told me that if I "really" wanted a pet, I can get it for an extra $300. Some straight up gave me a smug smile and told me how I'm not capable of owning a pet.

#Sorrynotsorry, but there's a certain point where vetting stops being vetting and starts being picking apart applicants just to hurt them. And I have experienced it. I know I'm not supposed to take it personally, but after a while, I had to. Some were downright cruel when they rejected me.

Looking online, I later found out that animal rescues have a tendency of attracting narcissists and personality-disordered people. In other words, they use access to pets to get a power trip over people.

Well, this made a lot of sense. If you've ever had to deal with preachy animal rights people, you'll understand what I mean. It's really not about the pets. It's about them trying to act like they're "good people" and "better than you."

The Vetting For Impossible Standards

One of the things I constantly hear when I ask why it's so hard to adopt a dog is that rescues vet "for the sake of the dog." This is true, but only up to a point.

Rescues should be looking to see if the person has a good home, that they are open to buying nice dog food for the pup, and if the person already chose a vet. I did all that. You might be wondering why I'm empty-handed in the adoption process.

Honestly, the standards are constantly-evolving and change at the drop of a hat.

I've been rejected for "not being confident enough" and for living in an apartment when I specifically asked for a dog breed known to do well in apartments. I've heard of people being rejected for not buying the right brand of dog food for a pet.

At one point or another, it becomes clear that the standards these rescues have are arbitrary and stupid. While it's great to have an ideal adopter, most people out there just want to give the pet a good home. Proof of pet insurance and a loving heart should be enough.

But it's not. Dogs turned into a status symbol and these rescues the keyholders. They know it, and sadly, they make it worse for people who actually want a pet for the right reasons.

Remember when I mentioned that someone asked me for an extra $300 for a pet? Well, that's not unusual. Or, they told me that they can have me pay money for them to raise it. I can stop by and pet it. Maybe. Probably not. God forbid people bond with animals, right?

Some had the nerve to reject my application then ask for donations. Like, are you kidding me? If you can't tell, this is money talk that's loosely veiled as concern "for the pets." If they actually cared about the pet, they would have given it a home rather than keep it in foster care. But they don't.

At one point, I talked to a rescuer who openly admitted that they source their dogs from shelters. From there, they add more to the price tag of the animal. In the pet sales world, this is known as puppy flipping and it's absolutely appallingly common.

You might be wondering how rescues get pets to puppy flip. It's simple. They buy them in bulk from shelters. And yes, let's call it what it is: it's a bulk purchase.

Shelters want to see the animals leave to homes. This means that shelters end up giving all the cuter, younger pets. They leave the less adoptable ones in the shelter. Rescues get their pick of pets before would-be adopters. Then they jack up the prices so that the non-profit can make a profit.

To make sure their operation is profitable, they beg for donations...even though the animals in question are being sold at breeder-level prices. And yes, I'm saying sold. The "rehoming fee" of $500 is a sale price, not a fee to dissuade irresponsible people from selling the dog to a lab.

Since rescues are 501(c)3 organizations, they don't have to pay a dime in taxes for the profits they make puppy flipping. Isn't that great?

When I went on Craigslist, I searched for dogs that need a home. The rehoming fees were huge. $500, $600, and $700 were common. These pet owners claimed it was to ensure the animal went to a good home.

Honestly, I can understand a rehoming fee but only up to a point. The truth is, $200 to $300 is reasonable. You don't want your dog to end up in a lab or in a dog fighting ring. I get it. But $700? No, that screams that you're doing this to get as much money as possible from selling your pet.

That's scummy, just so we are all clear.

You Aren't Guaranteed A Healthy Pet

While a lot of rescues and shelters claim they'll give you a healthy pet, the truth isn't quite real. In a recent article on Slate, a writer explained that the rescue agency she got her dog from lied about the dog's temperament. It was an extremely violent dog.

After trying everything under the sun to bond with her animal, she ended up having to put it down because it bit too many people. People immediately told her she was a puppy killer, but the truth is, she's a victim too. She was lied to.

Shelters don't always tell the truth about a pet's health. Parvovirus and other illnesses often pop up shortly after adoption. Why? Because the animals aren't vetted and cared for. This leads to more costs that adopters have to deal with.

So while you're stuck trying to do the right thing, a lot of these "animal loving" rescues lie about the animal's health. Sometimes, the pets die within months of adoption. That's insanely heartbreaking, not to mention messed up.

I'm going to get so much flak for this, but frankly, I don't care. I'm all for #shopdontadopt. Adoption is not about dogs anymore. It's not about adding a new furry friend or anything like that. It's turned into a power-hungry cash-grab coated in a politically correct veneer.

If you look online, you'll see so many people talk about how bad adoption agencies have gotten. I know I'm not alone when it comes to terrible experiences. Unfortunately for the pets in them, someone has to put their foot down and make their money talk.

I think it's better to shop for a pet than give any money to the sick bastards who claim they care about dogs but turn it into a power-hungry grab for cash. At least dog breeders openly admit that they are doing this for a profit. I can respect that honesty.

As for me, the entire process of trying to acquire an affordable ESA has turned into a goddamned nightmare. It's caused me to start drinking again. I probably need therapy after trying to get a therapy animal.

If I were to be honest, I also stopped thinking highly of pet owners after seeing this ugly underbelly of pet ownership. Call it sour grapes, but looking at dogs only conjures up feelings of hurt and rejection now.

I can honestly say that I've developed an aversion to canine companions because of this. It sucks, because dogs suffered because of people. But, frankly, I'm done with dogs. People have turned me off from them, and to a lesser point, cats too.

I can proudly say that all the money that was going to go to them is going to be going to a vacation instead. After all, people will actually be happy to see me relax in Vegas while eating steak.