Pigs Aren’t As Dumb As You Think! We Have Been Underestimating Them.

by Nikhil Vemu 12 days ago in fact or fiction

They outperform a three year old kid in Intelligence. 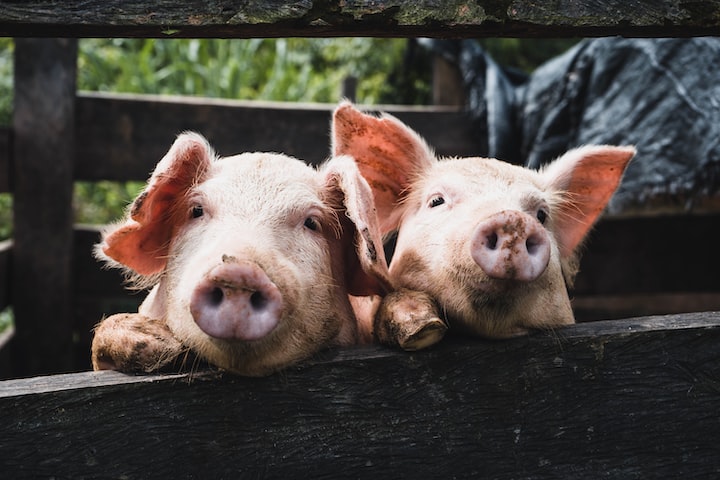 In fact, they don’t sweat.

In fact, Pigs are some of the cleanliest animals around, than your pet dog! Provide them some cooling facility, and they’ll never roll in mud again. If given a choice, they even make sure their toilet and latrine place is as far as possible from their living and eating areas. A new born piglet learns this practice just in hours after its birth.

They possess complex social lives. The piglets learn to run to their mother’s squeal. They learn from others’ mistakes. They could work in a team and cooperate with one another.

They love to play and engage in mock fights with each other, like how dogs do. They form close relationships with other fellow pigs, and love close contact and being together. They sleep with their beloved snout to snout.

They are very peace-loving animals, just like cows. They are even found to show empathy or compassion for other pigs around. They can sense if you’re nice to them! Or even with other fellow pigs too. They can distinguish between close and stranger pigs by sight.

There are numerous stories of pigs having saved lives of humans. For example, a pet pig of name Pru pulled her owner out of a muddy quick sand. To mention one more, Priscilla, another pig, saved a young boy from drowning.

The Pig is the last of the Twelve animals of the Chinese zodiac. It is seen to represent fortune, honesty, happiness, and virility.

They are the 4th Most Intelligent Animals in the world!

“When swine carry sticks, The clouds will play tricks

When they lie in the mud, No fears of a flood.”

Experiments on them since 1990s prove that they’re more easily trained than any other animal. They were trained in several tasks like controlling a mouse cursor with their snouts. They learnt it as fast as chimpanzees did!, who’re our closest relatives. They used the cursor to distinguish between drawings they already knew and those they were seeing for the first time. They even showed incredible performance in Odour quizzes.

They can make sense of a Simple Symbolic language and can learn Multiple combinations of symbols for Multiple actions and objects. They are skilled in finding a way through Mazes. They can recognize themselves in a mirror and even find hidden food using a mirror. Most amusingly, they even deceive their bulky fellow pigs, by heading to hidden food only when they’re not watching them! Because bulky pigs eat a lot.

They learnt to play mini Video games with Joysticks, after a little training. They also possess excellent Long-term memories. They could outperform a 3 Year old child in Cognition i.e., acquiring knowledge through thought, experience and senses.

They are even more persistent than dogs in solving a difficult task. Dogs turn to humans earlier than pigs do. Pigs try to solve problems independently, in most of the cases.

This was the reason why George Orwell used Pigs to symbolise the Leaders of the Soviet Union, in his famous novel ‘Animal Farm’.

They possess a Keen Sense of Smell:

Q. Then why aren’t pigs used by the police?

A. Dogs have been domesticated by humans for thousands of years, and are evolved to be friendly, loyal and co-exist with humans. And they possess reliable sense of smell. So, dogs are used by the police often.

Yet, there was a case when a pig was used in Germany in the 1980s as a drug and explosives sniffer hog.

Pigs are reliable truffle hunters. Their tremendous sense of smell locates the pricey fungi, and so are reared by truffle harvesters.

“I am fond of pigs. Dogs look up to us. Cats look down on us. Pigs treat us as equals.” — Winston Churchill

1. They are naturally slender. They only become fat when humans overfeed their greed.

3. They are the only animals that can’t lift their head to see the sky.

4. They are immune to multiple diseases. This’s why there are cases when a Pig’s liver is transplanted to a Human, for increasing immunity.

7. They constantly communicate with each other. More than 20 different Vocalisations have been identified.

8. They can eat almost everything. Even Human Bones!

Ever since I learnt a ton about Pigs, I developed a subtle respect for them. When I started observing pigs around my house, I find them interacting in a more matured way than a group of dogs.

I feel sorry for them being forcefully impregnated and slaughtered painfully. It’s an unfortunate thing happening around us contemporarily. Just go and give them a biscuit, and look into their eyes. Observe the love they show on you. You don’t feel like harming them anymore.

Q. Pigs are bred to kill. So, what’s wrong in eating them?

A. You’re right! But Breeding them for food doesn’t make them a stoic. They get no capability to endure pain, fear and sorrow. They still suffer greatly in the hands of slaughterhouse workers.

Lastly, I suggest you to watch this 12-minute documentary “Farm to Fridge, The Truth About Meat Production” on YouTube, if you’re interested to know how animals are treated before slaughtering and how they feel when they sense they’re gonna die in the next moment.

﻿This story was originally published on Medium in Illumination-Curated.

If you've liked what you've read, please check out the rest of my work on Vocal, and share them with your friends on Social Media.

You can also find me on Medium﻿ ﻿

If you've really, really liked my article, and want to reward my writing, a small tip would be greatly appreciated. Thank you!

A hobby writer who never leaves his readers discontent.

Connect with me on Linkedin

Find me on Medium

See all posts by Nikhil Vemu →