Not On Delta Airline's Dime!

by Brian F. Crump 19 days ago in wild animals

RIP Cecil. You have paved the way.

I had a thought that entered my mind as I was reading a news post just a few years ago regarding Delta Airlines.  Out of curiosity, I checked to see if the same information holds water and to my surprise, it does.   Delta Airlines states they will not allow hunting trophies (animals that are killed in other countries by humans) on their aircraft. I think this is almost the best thing since sliced bread. Why?

Think of the mind of a murderer. Someone in the state that has the death penalty commits murder and is arrested for that murder. That person would likely give up certain information because he/she would not want to receive the death penalty. But why not? They had killed someone, thus according to that specific state they should die as well. Most of the deaths by jury are done by lethal injection nowadays.  This form of the death penalty is supposed to be more "humane." The murderer's victim(s) could have suffered a wound in the lung, a busted heart, shattering of the spinal cord, or other things that may cause extreme pain, yet, the murderer will try to negotiate life in prison instead of the death penalty.

An animal who is hunted for their tusks and fur does not deserve to die either. They live on instinct whereas we know the difference between right and wrong, yet us humans hunt down and destroy the life of an animal. Most animals don't even have a chance, such as a deer, moose, and other defenseless animals for the purpose of having their heads on the walls of those that murdered them. I would be willing to bet that if such murderers would be caught and tried for these crimes, they would negotiate not to be put to death, which is a more humane way to die than to feel hot lead piercing through your organs as you struggle to breathe or become scared of what may happen next.

The decision of Delta Airlines comes after A Minnesota dentist (Palmer) traveled all the way to Africa to kill a lion (Cecil). Little did he know, this 13-year-old lion is special to the region and has a GPS on him. This is his excuse...

Palmer issued a statement that reads: “I hired several professional guides, and they secured all proper permits. To my knowledge, everything about this trip was legal and properly handled and conducted. I had no idea that the lion I took was a known, local favorite, was collared and part of a study until the end of the hunt. I relied on the expertise of my local professional guides to ensure a legal hunt.” What is very hurtful is the way these men are smiling after the kill. Can you just imagine hot lead literally tearing up your insides, your organs and he (Palmer) is a dentist. Would you trust him to work on your teeth? 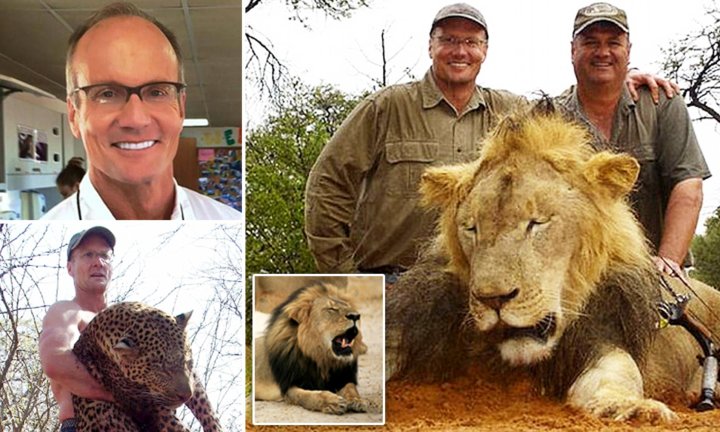 So, if someone was to go to his neighborhood and shoot a person because they heard that person was bad and they have sources that would confirm that, would that be justifiable to take a life and have a trophy of the deceased?

Let me go on record to say I am not a believer in the death penalty. I know some may say that we kill cows and some other animals for food. Technically, it would be for food, not trophies.

Photograph of Cecil after the kill credited by dailymail.co.uk

Follow me on Instagram for photographs of my journey and upcoming articles by clicking on the link below.

I am a good guy, but I'm not an Angel. I do sin, but I'm not the devil. I try to live by the advice of my elders. You will find an array of topics that are of interest. I also have Twitter and Instagram.