by Shae Moreno 2 years ago in guinea pig
Report Story

How a tiny guinea pig changed my life forever 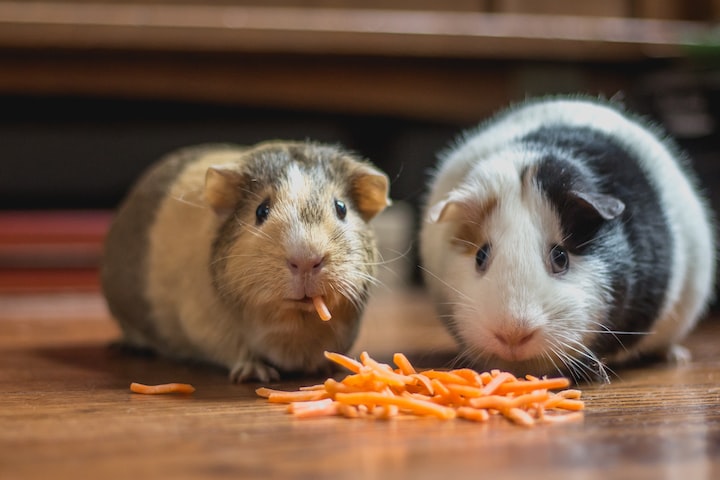 In 2011 my life changed for the better. I was 17 years old and depressed. I had stopped going to school and instead took classes online. My mental health was the worst it had ever been and it wasn’t easy to hide. The year before, my childhood home went into foreclosure. So, my parents, brother, and I moved into a rental house across town. I lived in the basement which was a pretty sweet gig for a teenager who needed room to paint their feelings and wanted everyone to leave them alone. I had wanted to get a pet for a very long time, but our landlords didn’t allow pets. I remember going to the shelter, finding a dog I absolutely loved, and being told no I couldn’t take her home and I cried all day. My sister, who had just gone off to college, had gotten a guinea pig named Simba. She brought him home when she visited and I loved him! I thought that was the perfect compromise. If I couldn’t have a dog, surely the landlords would let me have a guinea pig. My mom took me to the pet store (yikes! I didn’t know guinea pig rescues were a thing then!) and I saw all the piggies and didn’t have that moment with any of them. Pet owners know the one; when you see them and they see you and you know and you hold them and it would break your heart into a million pieces if you had to put them back. That moment. So we left and I thought I was back to the drawing board.

One afternoon, my mom wakes me up saying she has a surprise for me. I sat up in bed, put my glasses on, and she handed me this box. I immediately knew. She had gone back to the pet store and gotten me a guinea pig. As soon as I opened the box and pulled out my little man I knew he was meant to be mine. My mom said he was the last one there and I felt just awful for counting him out a few days before. He was an albino; had all white fur and red eyes. Yep, he had red eyes and they were beautiful. I named him Iggy.

My sister and I had a guinea pig growing up named Bubbles, and Bubbles was nothing like Iggy. I have yet to meet another guinea pig like Iggy. He was so full of life, always happy, always squeaking like he was trying to talk to us. He loved his hay and corn on the cob. Watching him eat watermelon was the funniest thing ever, he would get his little white face all pink. Iggy would do this thing when I held him where he would start spinning and that meant “I need to go potty put me down!” and he loved snuggling under blankets. He took a bite out of an Uno card when I was playing with my family one day, I still have the deck and everyone knows it’s a red eight because of his bite mark.

When he got sick was the first time I was ever faced with the reality that my pet is going to die. Growing up we had all kinds of pets; we had fish die, Bubbles passed, our turtle ran away, but the majority of the time my dad would take them to the shelter or rehome them before we ever were faced with that. And Iggy was the first pet that was mine and mine alone. I was so committed to being his mom and that made it hurt a little more. I took him to the vet a few times, once he had to get a shot and cried after. Once the vet put him on the table he came right over to me so I could pick him up and he crawled on my shoulder and buried his face in my hair. I will never forget that moment. It made me believe I did what I wanted to do; be his mom. He felt safe with me.

I never found out what was wrong with him. Little by little he started getting worse. I started having to feed him applesauce from a syringe to get him to eat anything. One day, I went to pick him up and he was almost completely limp. He was still alive, but he was about to move on. My mom came with me to take him to the emergency clinic. I know taking a dying guinea pig to an emergency clinic seems like overkill, but he was my best friend. If there was any chance they could save him, no matter how small a chance, I needed to know. So we sat in the waiting room while they took Iggy back and examined him. Maybe five minutes later a vet tech comes back and tells me what I already knew but didn’t want to believe. He was dying. She said either we could take him home and wait for him to go naturally or they could put him to sleep. I decided on the latter. The very nice technician asked if I wanted to come back there while they were putting him down. I declined. That is one of the biggest regrets I have. When I think back on it now, I still see him running to me and burrowing into my hair at the vet’s office and I wonder how he felt in his last moments without his safe place. When they brought him back out to me, wrapped in his blanket that I still have tucked away in a closet, I was a mess. We took him home and buried him in the backyard of that rental house on Spaulding.

Iggy taught me a lot about being a pet mom. A tiny albino guinea pig taught me more about love, compassion, and bravery than anyone or anything before. If it weren’t for him, I don’t know if I would have the patience for the dogs I have now. I practiced hand feeding Iggy when he got sick, now I hand feed my chihuahua because, since he’s gone blind, bowls scare him. Iggy taking a bite out of an Uno card was practice for my 60 pound lab mix trampling over a monopoly board. Iggy passing away prepared me for my first pup passing away suddenly; at least I knew what I was going to feel. It’s been almost 10 years, and I still think about him all the time. I still hold those memories so close to me. He needed me to take care of him, but I think I needed him more. It’s funny how six months can change your whole life. Iggy only lived for six months after my mom brought him home to me in that box. Six months can change who you are at the core. Iggy changed my life.

More stories from Shae Moreno and writers in Petlife and other communities.