by Michelle Martiya 4 months ago in training

The beginning of my two-year training saga with Stripes, the Plains Zebra.

I certainly didn't plan on becoming a zebra trainer. I actually hadn't really planned on becoming a trainer at all. Feeling burnt out from my dog grooming career, I decided to take a dog training course in an attempt to improve my grooming skills and breathe some life back in to my business.

The course was a basic intro to dog training, but it gave me a glimpse into another world and I was hooked! Animal behavior and training became my obsession and I quickly moved from grooming dogs to training dogs, and within a year or so, training horses, or more specifically, mustangs.

Training mustangs led me to adopting my own horse, Robin Hood. He was supposed to be a sort of "pilot program" for a mustang rescue that I was trying to work with. A psychological mess, Robin Hood was fearful of everyone; I could barely get near him.

The idea was to show the rescue, through training Robin Hood, how my training methods could be beneficial for their horses. It quickly became clear that in spite of my success with Robin Hood, the rescue wasn't interested, so with the help of a friend who agreed to let him stay on her property, I adopted him. Little did I know, Stripes would be moving in just down the road and was soon to become a big part of my life.

A Zebra in the Pasture

On the way to my horse, there was a pasture that I always checked out as I was driving by. I knew the lady there had exotic animals, so I was always trying to see what she had. Usually I didn't see much of interest, until I saw Stripes. Never in my life had I imagined one day I'd be driving by a pasture somewhere and see a zebra!

I stopped, of course. How could I resist an opportunity like this? The lady who answered the door didn't seem phased at all that I had showed up unexpectedly, asking to see her zebra. She waved me in the general direction of the pasture and told me I could go back to see her (the zebra), but that she wasn't friendly and would probably just run away. Before I could even stop to think about it, the words came tumbling out of my mouth, "I might be able to help you with that." What was I thinking?! I had never even seen a zebra up close, let alone trained one!

I went on to explain that I trained animals and specialized in fearful equids, like her zebra. I wasn't really expecting her to agree to my insanity, but she told me to have at it. I was free to try my hand at taming Stripes.

Walking back to the pasture, I couldn't believe the lady had just sent me back on my own. Then again, it wasn't the first time I had been in a position like this. Seems like all of the pivotal moment in my life have been me asking to see an animal and somebody saying yes.

There were plenty of animals in the pasture I had to walk through to get to Stripes, all hoof stock, but nothing really exotic. I cut through the barn, per the lady's instruction, and stepped out in to another enclosure, and there she was... 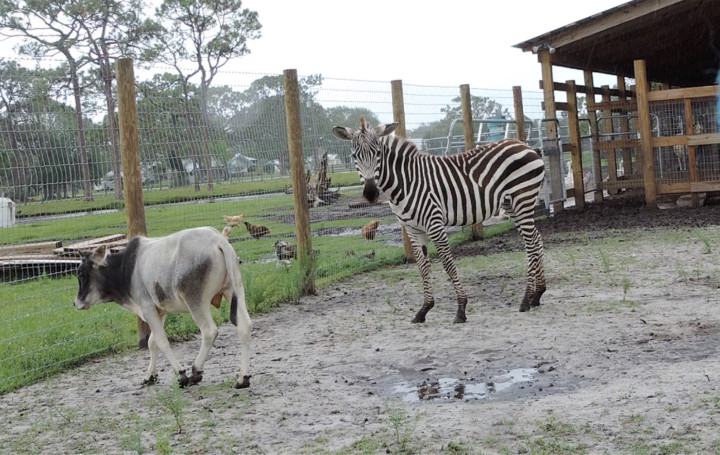 Still a baby at just over a year old, Stripes had a kind of elegant, girly look to her. True to form, she and her little zebu friend ran away when I stepped in to their enclosure, but not too far. They were curious.

It's a strange thing, being in the presence of an animal that seems so familiar and yet so unfamiliar, all at the same time. She looked kind of like a mule with funny ears and black and white stripes all over that looked like they had just been painted on, and the paint was still wet.

I set up my camera (I always record all of my training) and went to find some food, determined to get down to this business of making friends.

Stay tuned for more of my journey with Stripes in my next story, coming soon!