by Monica Stefan 27 days ago in horse
Report Story

When a rider looks into the eyes of a horse, they see a piece of their soul 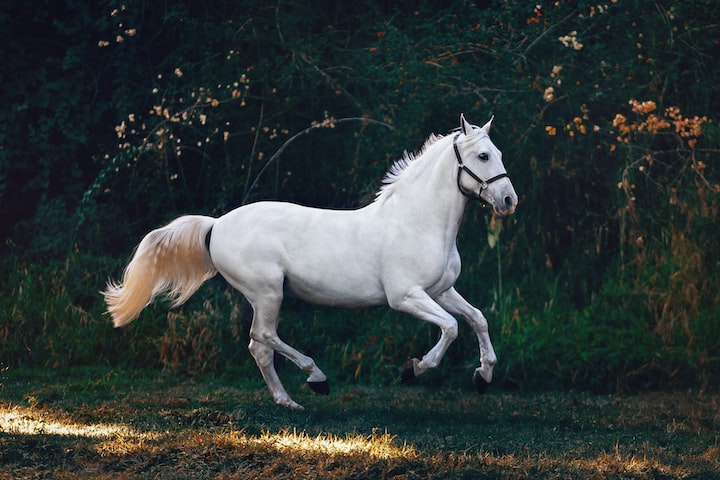 Zero, my horse, has always struck me as a smart "old soul" with a fierce temperament. We had a traumatic yet enlightening experience together when I rode him at our first horse exhibition at the age of seventeen. He started bucking frantically throughout our warmup round. I was thrown off the saddle almost instantaneously, landing right in front of his thrashing hooves.

He could easily have gravely harmed or killed me at that point, but when he noticed that I had fallen off, he came to a halt. He took a step back from me, tenderly staring down at me through his lashes, as if I were a work of art.

Despite his agitated and wound-up state, I saw a calm, warm look in his eyes as I watched his hooves move away from my body, which was stretched out in the middle of the arena. He had a guilty expression on his face, as if he realized he had overreacted in his frantic excitement and hyperactivity. As if he was aware that in a fleeting second of vulnerability, he had lost control.

Given my own panic episodes and tense energy as a result of my generalized anxiety disease, I felt a strong sense of empathy and connection with him. I was all too familiar with the emotions of guilt that can arise from behaving in the heat of the moment due to extreme emotional lability.

When a rider looks into the eyes of a horse, they see a piece of their soul. A portion that was never expected to be discovered.

We made significant progress in our relationship in the months following the incident, and our mutual trust skyrocketed. My riding class spent the rest of the spring working on jumping sets, often known as gymnastics, without using our hands as a help (which meant going over jumps with our hands in the air).

This practice is critical in developing a strong yet adaptable working relationship between the rider and the horse. The rider must learn to trust that their horse will clear the jump and not put themselves or their dynamic partnership in jeopardy.

It is critical to approach the jump at a steady pace and with confidence in order to succeed in this exercise. Given Zero's tendency to get distracted and bow out before leaps, I had to work hard during these classes to maintain myself grounded and keep Zero centered during the jump.

Some horses will put you to the test, while others will teach you and bring out the best in you.

I'll be eternally grateful for the friendship I developed with that amazing four-legged creature. During a moment of my life when I was trying to manage my anxiety and stress, he was important in making me feel grounded and safe.

Regardless of our missteps, I always felt a wonderful sense of peace, strength, and certainty on his back – characteristics I tried to accomplish in other parts of my life. I grew to understand his peculiar fears and mood swings as time went on, as they were hauntingly similar to my own.

I got more adept at accepting my illogical thoughts and concerns without becoming them and allowing them to govern my life as a result of developing a relationship with Zero. He instilled in me the value of living in the moment and appreciating life in all of its wonder, beauty, and adversity.

He aided me in living true to John Wayne's definition of bravery: being terrified but getting up anyhow.

Although there is a lack of evidence supporting the use of equine-assisted therapy, often known as therapeutic horseback riding, all of the findings to date have been highly encouraging.

According to one study, equine therapy is excellent for kids suffering from sadness and anxiety, which could explain why my personal experiences riding Zero had such a deep impact on me at that vulnerable age. Equine therapy has also been demonstrated to help young women with social anxiety symptoms, especially when used in conjunction with cognitive-behavioral therapy.

In a study of equine therapy for anxiety and post-traumatic stress disorder (PTSD), researchers discovered that it greatly increased patients' use of mindfulness practices while also reducing their anxiety and PTSD symptoms.

Equine therapy has also been demonstrated to reduce irritability and hyperactivity in children with Autism Spectrum Disorders, as well as improve social communication.

In the end, horses can be an extremely effective antidepressant and anti-anxiety therapy for troubled people. As the ancient adage goes, doctors were created by God to heal the human body. Horses, on the other hand, were created to aid in the healing of the soul.