"When You Come to a Fork in the Road, Take It"

by Mark-John Clifford about a month ago in advice

Quote from Yogi Berra, Catcher for the N Y Yankees 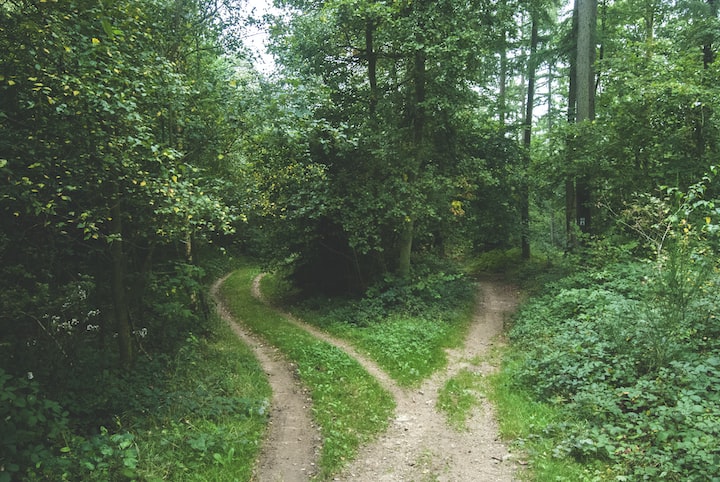 Photo by Jens Lelie on Unsplash

I've been a Red Sox fan since I was a kid. My Dad was one, and we had a family member that was on the team, which helped me make my decision. My uncle, on the other hand, a man that was like my second Dad, was a true blue New York Yankee fan and did everything in his power to get me to switch allegiance.

He took me to games whenever he could, especially when I moved to New York and opened my business. He would show up at my office with box seats to home games and tell me the virtues of being a Yankee fan. To this day, it never worked.

What does all of this have to do with the quote above? Here we go.

One day on a whim, he figured that if I met some of the Yankee players, I might switch teams. So he took me to the stadium and into the locker room, where he knew just about every team member. But there was one member he insisted I meet. At the time, Yogi Berra was coaching the Yankees, but I had heard of him when he played as the catcher for the team.

My uncle would tell me tales of the great Yogi Berra, not only his skills on the field but his skills with words, and I never really understood the word thing until later in life.

Yogi Berra gave a commencement speech one year to a college in New York. When he was wrapping up his speech, he gave one final piece of advice to the graduating seniors, "When you come to a fork in the road, take it." That was it. He ended and walked off the stage.

I heard about the speech through some friends and wondered for years about this piece of advice he gave that day. Then I found out the story behind it when I asked my uncle to take me to see him to ask him what he meant.

To be perfectly honest, I was intrigued by this quote and wanted to know more, so I begged and pleaded with my uncle to set up a meeting with Yogi so I could ask.

The meeting was set, and we met Yogi at a coffee shop in Brooklyn on a Monday afternoon.

He didn't remember meeting me years ago, but that was to be expected. I met him once in the team locker room when things were hectic, and I was some young kid with a connection through my uncle bothering him before a game. Who wants to remember that meeting?

Anyway, my uncle told him I had a question about one of his many quotes. By then, I had read many quotes he had stated over the years, and if you get a chance to check them out, I recommend you do that. There are some great quotes from this catcher/coach.

When I asked about the quote from above, he started laughing and said he often gets asked about that quote from business people he knows to ballplayers to just some kid on the street wanting to learn more.

He said it came from an incident when a sportswriter was coming to his home to interview him for a story. The writer asked for directions, and Yogi told him, you take a right on this street and take it when you come to the fork in the road.

See, Yogi lived at the intersection of that fork. No matter which fork you took, you ended up at his front door. He never knew at the time how meaning that quote would come to mean to others.

For me, it was a philosophical question that was longing to be answered. The question is, which way do you go? I mean, what other question could you be asking yourself?

After hearing his answer, it left me with more questions about life and my journey so far. I started to question every fork I had taken so far and what forks I might take in the future.

It forced me to define some areas of my life that needed defining at that very moment in my business and personal life. Areas that were either suffering from terrible decisions I had made to decisions I thought were right but affected others.

I took that quote to heart and started to review where I was versus where I wanted to be. Then I went a step further and looked at the forks available to me that I could foresee and made decisions on them as best as I could at the time.

What I didn't foresee or want to see is how those choices of taking whichever fork I took would affect not only me but also others in my life. That's what I didn't want to see, I guess. At least that's what I think now when I think back on those terrible choices in forks I took.

I could go on for hours and hours about terrible choices I made when taking the fork in the road. The roads we travel are for our learning and to help teach us decision-making. Along the way, we take forks that will be detrimental to our well-being and others in our lives.

Over time we take the forks we believe are best for us without knowing what is in store for us. We take the fork with a preconceived notion sometimes and hope for the best, and other times we know what we're in for and take risks anyways.

There are many people who, after the forks I chose back in the day, came to tell me I didn't think about others; I only thought of myself, and they were right.

Now that I'm 67, the forks I take are centered on not only me but my family and friends. I take the forks that, in most cases, I know or hopefully predict the outcome. I don't want to make the same mistakes at 30 or 40 years of age.

Taking the fork in the road is adventurous in any case, and it should be taken, lived, and remembered.

Take the fork in the road. You deserve the experience.