What Grew That Night

by Topher Manuel about a year ago in happiness
Report Story 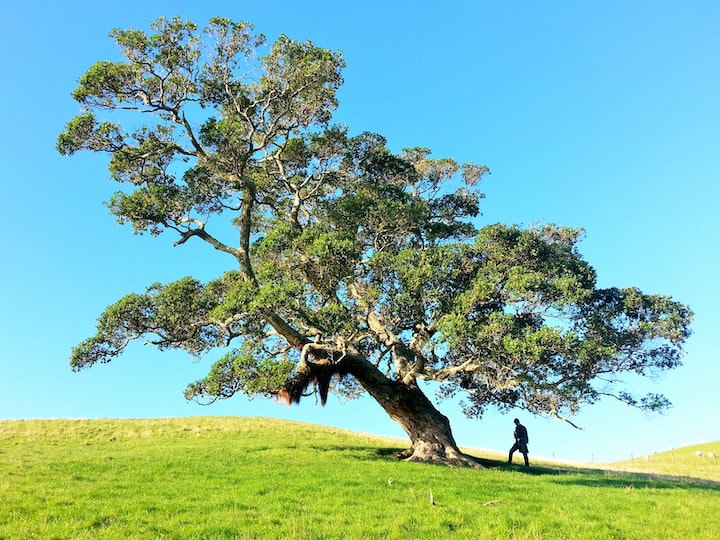 Photo by Gilly Stewart on Unsplash

I remember my shoelaces tickling each other and threatening to trip me as I walked through the park, I didn’t care to tie them; what else could I focus on except the fact that I had just gotten a black and completely blank notebook to fill with unfathomable possibilities? I didn’t know the guy who had given it to me and when he insisted I take it he disappeared like steam before I had the opportunity to even say thanks. I thought about him the second before I heard that noise, like the very ground below me was getting torn open from the bottom up with God's hands. At first I was terrified, frightened that the earth was going to crack in half or that magma was going to burst through the grass like a bubble of lava. What ended up rising was not hot and orange but crisp and green. It grew like a sprouting flower in time that was much quicker than the amount we call a second. My eyes were astounded, almost unable to comprehend what was happening before me like the very roots of the earth were yearning to combine with the sky. The branches rose into the air towering me, like very smooth and thin fingers. The green that grew from them unrolled gloriously from the bark and branches, striking my fancy as the locks of a dame's hair. Back then I didn’t even understand the value of cash but still I knew what had happened was ravishing.

But like I said… I didn’t understand the value of money. I was just some kid who had happened to stumble upon a literal tree of it. You have no idea how many times I've rolled my eyes when I hear the people say, “Ya know money doesn’t grow on trees?”. In this very rare and very strange case it did, and even now thinking about it I smile with profound curiosity that mixes my soul like a swirling storm of clouds. I still have no idea why that happened and why I of all people happened to be the first person to find it. Thinking back I might have saved it all for my future, because you know what you have as an adult that you don’t as a kid? Bills. That kind of thinking is why I’m glad I used to have the mentality I had when I was younger, because the only image in my mind at that moment was of the man who had given me that notebook. It was dark out and the streetlights were on so I knew that I should’ve been heading home, but a strange pleasantness in my stomach kept my feet planted like the tree that grew before me. This green that grew from the tree meant nothing to me, I did recognize it as something that looked like the paper in my mothers wallet. It had significance to her and it did something for her that I didn’t quite understand but could still appreciate.

I began to pluck the green from the tree as delicately as I could like picking feathers from a peacock. These ‘leafs’ felt rough and thin as if paper had an older brother that was strictly meant for business. Each one was centered with a printed photo of a man that I would later come to find as Benjamin Franklin. I plucked off well over a hundred of those things and only slightly tore one in the process; I typically keep that in the trunk up in my attic but right now it rests besides me as I write this. When I was finished I remember that my hands were so full the wind was helping me carry it all throughout the streets of town. I’m not sure where those few bills went, what I do know is that I didn’t see any walking those roads the next day. My laces were still untied but I walked carefully all around the block next to the park and the one after that and then the one after that, all leading up to the house I grew up and currently live in.

By the time I made it home I had only three bills left including the one I mentioned a moment ago. Satisfaction strolled and made place in my heart for days, the way I imagine it did for God when he created the sea. I had no idea what I was doing but I felt joyous sharing, even if it was only one slice from a loaf of bread. Everyone ate. Two Benjamin's slept in between every mailbox that was grounded between me and that tree. When I finally walked through the front door my father was waiting for me in the living room, standing tall and as intimidating as I had ever seen, but I was young and times were changing. Boy I can still hear the man yelling to this day, I swear I was one-and-a-half-steps-in-the-wrong-direction away from the hiding of a lifetime. He sure didn’t seem too mad the next morning though when he came back inside with the daily paper and two Mr. Franklin's tucked between its pages; needless to say I had a baby-sitter that night. My dad used to bring that up every now and again before he passed, saying it always was one of the kindest things that has ever happened to him.

Just as my Father would mention that act of kindness, the man who had given me my black notebook made me appreciate the kind and random gestures in life such as opening the door for a stranger or a simple smile. Sure money doesn’t typically “grow on trees” but it did that one time and maybe it will again… who’s to say? But as another saying goes, “Share the wealth”. For even if all you have in your empty pockets is kindness, share it.

More stories from Topher Manuel and writers in Motivation and other communities.