If Your End Goals Are Your Source Of Motivation, Stop Immediately.

by kamika eleanor 7 months ago in goals
Report Story

“This is the inner paradox of goals — they are valuable when we try to accomplish them, but someday they will disappear.” — Charles Chu 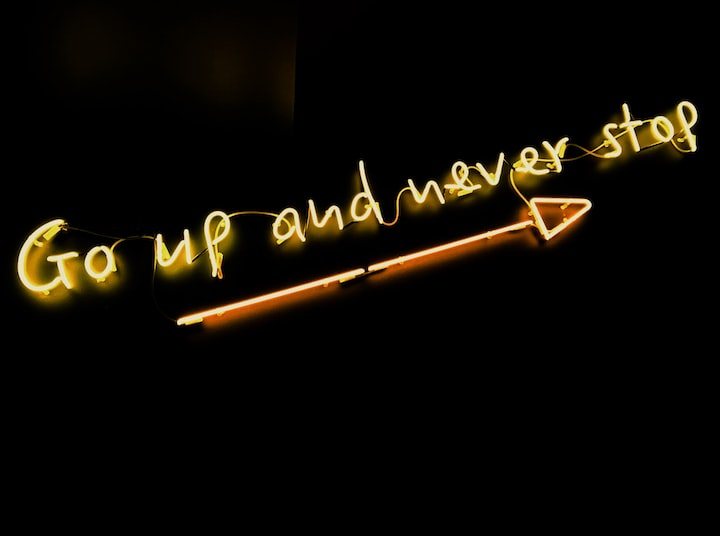 Photo by Fab Lentz on Unsplash

Used right, they are effective tools for improving yourself and achieving your dreams.

For instance, I recently experimented with unreasonably high goals and found that they totally drive accomplishment.

I also feel that goals make any endeavor more exciting. They are like bacon: whatever you add them to, they’re going to make it better.

But your goal shouldn’t be the thing that’s pulling you forward. If it is, then something is seriously wrong.

The paradox of goals

A goal is something that goes away once you hit it.

Goals condemn one to go through a process where one has an unsatisfied desire, works to satisfy the desire and experiences pleasant but temporary feelings of desire-satisfaction as a byproduct when one reaches the goal.

What follows, is a void:

“This is the inner paradox of goals — they are valuable when we try to accomplish them, but someday they will disappear.” — Charles Chu

If you need goals to feel like your existence has a purpose, you’ll get addicted to them.

Some philosophers even think that humans cannot withdraw from the cycle of dissatisfaction → labor → goal-achievement and choose to stay happy.

I don’t think that’s accurate, but in pointing to the emptiness of a goal-driven life, their argument relates to an important lesson — the truth of Buddhism.

I’ve been meditating for over 10 years now, and the mindfulness-mantra that “all labels are fake” has always attracted me.

It sounds catchy and incredibly liberating, but when a non-meditating friend recently asked me to explain what it actually means, I wasn’t able to break it down.

To my own pleasure, when I was traveling from my hometown in the Netherlands to Budapest (where I’m doing my doctorate), something clicked. In a strange way, the meaning of ‘labels are fake’ sheds light on how we can go wrong with goals.

What does “label” mean? In this context, a ‘label’ means an ‘evaluation’. Something was ‘successful’ or ‘unsuccessful’, you did ‘well’ or you ‘screwed up’. You ‘made it’ or you ‘failed’.

What does “fake” mean? (This is where it gets cool.)

In this context, ‘fake’ means not inherently existing. Such evaluations are not factual properties of states of affairs.

They are not really there.

The small problem with goals

If “labels” don’t naturally exist, we can ask, ‘What put them there?’

The answer is ‘goals’. Goals put them there.

These benchmarks, moreover, are projections of our mind.

That, I think, is the truth in the Buddhist lesson that labels are illusory.

The Buddha even takes it a step further: because suffering comes from wanting, we should eradicate desire.

The deduction, that we could put an end to some pain if we would stop creating the possibility of failure, is apt. The conclusion that we, therefore, should stop fighting, is not.

Some struggles are worth it.

Which brings me to the deeper argument for why your motivation shouldn’t come from your goals.

Not the right reason (the big problem with goals)

Goals are not the right cause for motivation

By itself, there is nothing good about achieving goals. Ticking off objectives has no intrinsic value. It doesn’t matter how fast you move if it’s in a pointless direction.

Many people spend too much time on optimizing their strategy, and not enough on questioning whether they’re chasing worthwhile aims in the first place.

If you need targets to bring in the energy and motivation, you’re probably doing something that’s not meaningful enough by itself.

What’s pulling you forward should be your recognition that what you’re trying to attain is worth it. Motivation should be a side effect of that.

The right reason for doing something is provided by facts about the thing that you’re trying to achieve, which make it something that is worth achieving.

By the same token, making a goal out of something does not suddenly make it valuable or important. Many people have unimportant goals.

In a nutshell: there’s a deep difference between achieving goals and achieving something of importance.

Don’t lose sight of that.

More stories from kamika eleanor and writers in Motivation and other communities.