How to Defeat Writer's Block Once and For All

The Five Best Strategies to Make Writer's Block Go Away (And Never Come Back!) 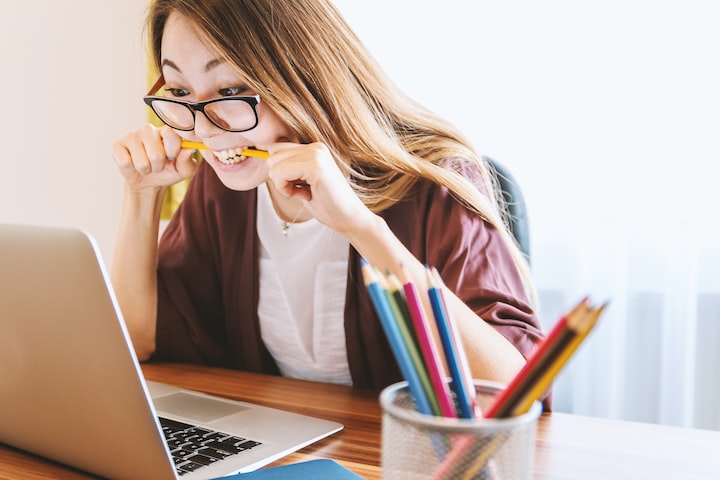 It's the perfect day to write a new Vocal story. You've scheduled out the morning; the coffee-filled ceramic cup feels warm in your hands as you glide to your desk. Sparrows chirp in the distance as excited fingers place themselves on a colorful keyboard.

And then, it hits you. From your brain's idea-space resounds the sound of chirping crickets. Inspiration flies out the window. You lift up your keyboard in the hope of finding your missing words hiding underneath.

All you find is that you've been cursed. A nasty affliction called writer's block has stricken you.

I recently had quite an intense bout of writer's block. Between a deadline-riddled writing job and a desire to personally write, I was desperate to get back on track.

After a few days of staring at empty Google Docs and Vocal Story drafts, I ran to the internet for help. What I found didn't just cure my writing block; it also made me a faster and more confident writer.

When in doubt, chart it out. It'll be much easier to travel through a story once you actually know the destinations. If you're stuck on that nasty paragraph in chapter 3, take a step back and plan out what you want to happen in the following few pages.

Once you know the plot, writing gets a lot easier. All you have to do next is fill in the blanks with flowery language and details that make it engaging.

If you haven't tried stream-of-consciousness writing before, you're in for a treat. This sort of writing actually created the article that you're reading! The strategy is simple, and the method feels freeing!

Next time you're drafting, just sit down and type everything that pops into your head. It doesn't matter if it has nothing to do with your story, if you hate it, or if you can't stand the wording.

You can absolutely edit it later; just get those words down:

His heart sank in his chest, the organ weighing down on his diaphragm. I really don't know what to put here, maybe something about tears? No. No tears. Winston is tough! Sadness welled in Winston's throat. Goodness, that helicopter flew by low. That's pretty distracting. Focus! The room fell silent, 20 pairs of eyes stared in anger. Winston was alone - oh maybe I should show how alone he is instead of expressly stating it?

Every time I've tried this out, I've found it functions as a great warmup to writing. Things will be a bit awkward when I start, but my brain is ready to create actual content as soon as I've written a few paragraphs.

Though this method does create a bit more editing work than usual, you'll likely find that it'll only be the first section that really needs a major fix. Eventually, you will get into a groove.

This method is a classic. If you've ever searched "How to Overcome Writer's Block" in any search engine, you've likely come across this tip already.

Good ideas come from showers, so much so that there's an entire subreddit for it!

If you're having a hard time with ideas or how to write something, take a long shower and zone out about your story.

It isn't just showers that can work like this, though! A lot of people swear by taking walks, meditating, watching clouds, whatever. It isn't the shower that has magical powers to give you ideas; it's any activity that can get you into that meditative state!

4. Hop around your story

For that reason, I write random bits of the body first, in no reasonable order.

For example, on a listicle, I look at the whole subject and think, "Which section looks easiest to write first?" Then write a paragraph in number four, followed by hopping over to the lovely second paragraph of number one.

This trick is one of my current favorites. When I'm stuck on a story or article, I'll put comments for myself to reference throughout. That way, when I'm having particular difficulty with a sentence or idea, I'll just add a comment and move on.

Grace Hopper was born in 1906 in New York City. From a young age, she was proficient at mathematics. //Segue from childhood to adulthood.

When Hopper was 34, she attempted to enlist in the Navy but was rejected: her career at Yale was too valuable to the war effort.

When my job began to require weekly blog articles on a deadline, this strategy saved my life. Often, when I comment and move on, the perfect way to write one of those sections emerges as I make my way through other parts of the article. And, if I don't work on it until the next day, I'll know what to put where. If you're one who often loses their train of thought between writing sessions, I definitely recommend trying this out.

If all of these strategies have failed to conquer writer's block, look for the root of the problem. If these tricks don't start up the creative engine, it might be valuable to start asking yourself questions like these:

Just like with any other hobby (or livelihood), it's essential as a writer that you take care of yourself, take breaks, and check-in with your state every once in a while. This is your reminder to drink some water. ♥

More stories from Olivia L. Dobbs and writers in Motivation and other communities.