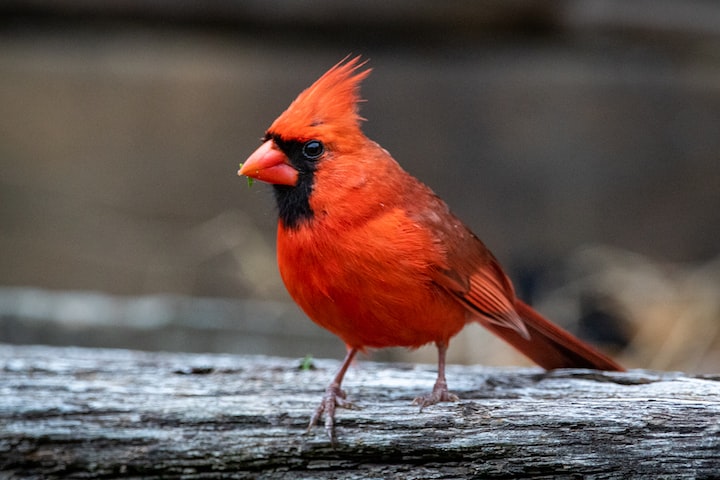 There’s a dazzling cardinal living in my backyard. It’s bright red feathers streak through the trees as it meanders between branches and occasionally lands on my fence. It sings a beautiful melody and the other birds echo back. I wonder what they’re saying, what the chirps of their language mean and what they’re constantly chitchatting about. As a multitude of expressions fly out of their beaks, I don’t doubt it’s important, even necessary for their neighbors to hear. Or maybe, birds are just big gossipers, communicating what they see below, always searching for predators or potential food sources.

My cat is definitely considered a predator to these fascinating creatures. One evening three brave little birds touched down in my yard. My cat, who had been laying underneath my porch swing periodically rubbing her whiskers against my toes, sprinted into the yard towards the flock birds. Two of them managed to escape her wrath, but one hadn't been so lucky. I suppose she had nicked its wing or maybe she had just shocked it, because it didn’t fly away. My cat crouched down in the grass and eyed her prey. I wanted intently from my place on the patio. After a twenty-second stare down, the bird soared into the air and my cat leapt after it, only to back in the grass empty-pawed.

I watched as the survivor soared off toward its companions. I wondered what it would be like to be a bird, to be able to take off in an instant and flap your wings against the wind, dipping them into the soft pleasures that are clouds. I couldn’t imagine how free they must feel being in such unison with the wind.

I thought about Jenny from Forrest Gump when she asked God to make her a bird, so she could fly far, far away. I wondered where she would have flown to if she had ever gotten her own set of wings.

I don’t know where I’d go if I were a bird, but still the fantasy of leaping off an edge and trusting my instincts to fly me into safety is alluring. Maybe I’d go somewhere warm and tropical. Or maybe I’d have to understand the nonsense that is the birds’ chatter to determine where would be the best place to take off to. The possibilities would be endless.

More stories from Kelsie Eldridge and writers in Motivation and other communities.