Why This Chore Is a Hobbit Habit 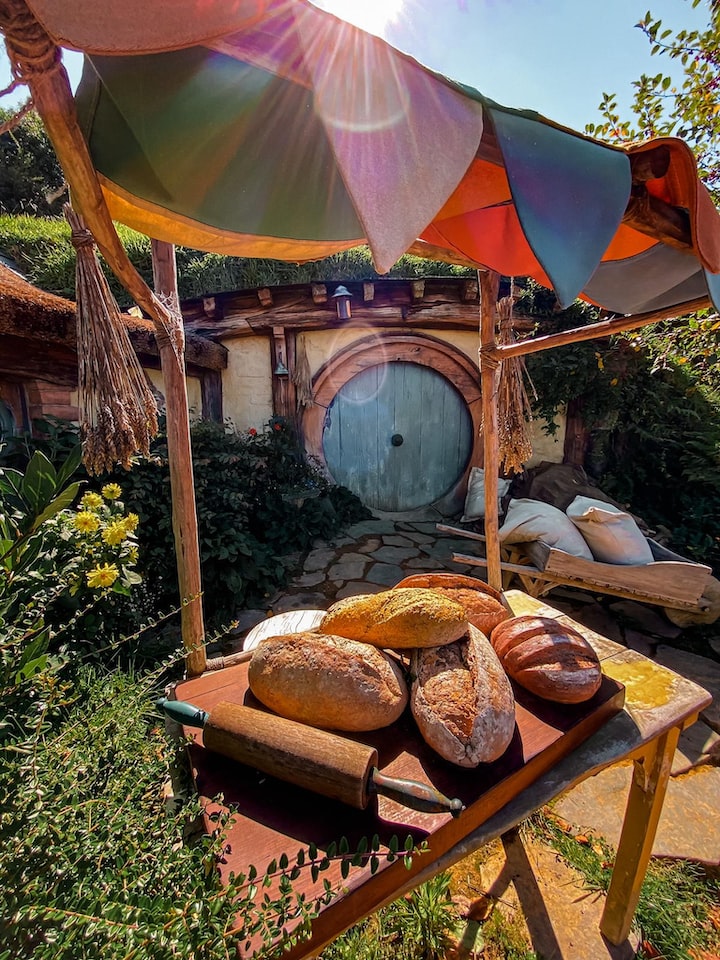 Photo by Amanda Swanepoel on Unsplash

Everyone knows just how often, frequently, and how much most hobbits eat. Is there any greater priority for a hobbit that his or her food preparations? We could call it obsession. We could call it a weakness. We could alternatively call it strength. These humble characters are filled with a true and genuine appreciation for life's simple pleasures, and their happiness is more easily achieved than that of other races. As a self-proclaimed hobbit though, I must say that on occasion this sort of lifestyle does have its disadvantages, small though that they may be. One such miniscule aggravation in the life of a hobbit could be the matter of dirty dishes, as anyone might imagine, so for now I will give you a glimpse into the predicaments of this situation.

“I have got to stop doing this!" I declare after finishing half of my stack of pots and pans.

“Why? You're halfway through already, and you've been doing such a great job keeping up with them lately." my husband responds.

I sigh. "Yes, but it would be so much easier if I would stop cooking so much! It's become a real problem, you know?"

“I don't see what the problem in cooking so much is. It was all very tasty." he retorts.

“The problem is this." I say gesturing toward the unfinished pile of dishes, the ones that have completed, and the ones I'm presently washing. "There are always so many. It's a problem. I've got to stop. It's a bad habit really."

He chuckles before commenting, "I think there are far worse habits to have. The dishes really aren't bad considering. The meal was definitely worth the pile of dishes afterward, it always is."

I sigh once more. "I guess. Still, it would be much simpler if I didn't cook so much. It'd help with the stack of dishes, and my waistline."

"Well, it would probably be better for all of our waistlines; but there is no guarantee we'd be eating any healthier, and you still look good." he retorts. “The food you prepare is healthy though, so I don't think that's the problem."

“No, the problem is the quantity. I always make too much or I work off of inspiration and make it into a feast when it should just be a meal."

“So just eat less. You always freeze some anyway." he rebuts.

“Yes, but that doesn't stop the dishes from accumulating. I even try to reuse some of them, clean as I go, wash some out as I cook; still it winds up the same. I'm doing dishes every day." I retort.

“I can always step in and do them. I don't mind. I have no problem washing them occasionally. I used to do them all the time."

“Yes, but I don't feel that it is fair considering I'm the one who used them all in the first place. You didn't ask me to bake bread, dinner, dessert, and three vegetables. There wouldn't be so many if I'd only made one." I respond.

“No, but I did eat the food you made so that means I should at least partially help with the cleanup. Besides, even though we all might be carrying a few extra pounds we're all healthy and fit. Our nutrition level is excellent, and everything checks out just fine with the doc. We can definitely say we eat healthier than most Americans because we cook our food at home. We also know every ingredient that it is in our food. How many people can say that?"

“I suppose you're right, but it also creates its own challenges too." I retort.

“Oh, like when we had COVID and our child refused to eat the cans of Chef Boyardee we had in the basement in case we were sick and not able to cook." I say smirking, "or that time we ordered Burger King while on the road and he said it was disgusting and refused to eat that too."

“To be fair, that burger was pretty gross. I finished it for him. They don't taste as good as they used to; at least, not like they were when we were growing up. Though, our parents didn't always cook a lot either." h e rebuts.

We both chuckle heartily.

“Yes, and I know for certain my beef stroganoff tastes far better than the Hamburger Helper version my mother made. Plus, that stuff is a rip off. You can buy all of those ingredients in larger quantities separately much cheaper than buying the individual boxes and it tastes a hell of a lot better." I assert.

“That’s the hobbit I know." he smiles.

“Yeah, yeah. Maybe I'm just too much of a cheapskate." I harrumph, "Either that or I have a way too unhealthy obsession with Food Network."

“Hey, we get some good ideas from Food Network." he protests.

“We do; probably why we aren't as satisfied when we go out to eat though. When we can make dishes that taste better at home, what is the point in dining out? Oh, wait! No dishes, now that is a plus." I chuckle.

“But is it really worth it?" he inquires.

“Most of the time, no, not really." I chuckle, "though I do like it when YOU cook. Your smoked meats are my favorite!"

“Yeah, and then I have to do the dishes, but you usually beat me to them anymore."

“Hey, I have a big hobbit and a little hobbit that depend on me, and my big hobbit is the reason why I'm able to stay at home in the first place. It's the least I can do. And when the food tastes that good like it does when you cook it, I don't mind doing the dishes. Like one of my former coworker used to say, "I'll do the dishes as long as my wife continues to cook and bake as well as she does. She is an amazing cook and an amazing baker! These young guys who refuse to wash dishes because they think it's the woman's task are missing out. As long as my wife cooks, I'll wash dishes all day long." I always appreciated that fellow. I'd say I would like an arrangement like that, but we both like to cook and bake so that wouldn't be fair, and again, the quantity. I'd feel guilty about sticking you with my mess, and some of yours aren't much better." I comment with a giggle.

“What can I say? We all love good food. It's obviously a priority." he responds.

"Yeah, but if I quit cooking and baking so much I wouldn't have to wash as many dishes as frequently is all I'm saying, and it would make losing weight a little bit easier."

“But look now, was that so bad? You're almost done with them now, and since you've been washing them every day it has gotten easier hasn't it?"

“Yeah, and I've been happy with what I've cooked. It brings me joy to make such a spread. Though, perhaps I go a bit too celebratory sometimes. I tend to go a bit overboard. What starts off as a single ripe cucumber in the garden turns into a cucumber and tomato salad with a tzatziki sauce, roast chicken stuffed with artichokes, olives, and tomatoes, roasted in a garlic, onion, olive oil-butter sauce with herbed noodles, and made complete with a cucumber lime spritzer cocktail with a non-alcoholic version for the little one. It's a bit of an obsession or maybe just sheer compulsion. Probably more restaurant than a family weeknight meal-it's just a bit excessive. Admittedly though, I enjoy everything about it...up until the dishwashing."

“Yes, I do admit at times you go overboard, but then we have plenty of leftovers."

“True and I factor that into my menu planning. I take my menu planning very seriously!" I say with confidence and a smirk, "Maybe the dishwashing isn't so bad and maybe additional exercise is worth factoring in for my waistline. Fortunately our son does still like ramen noodles when we are sick."

“Yes, how can any kid not? They've got that perfect snap, slurp, and chew consistency. Sometimes the packets need tweaking or left out altogether, but hey luckily we make our own broth, right?" my husband comments.

“Yeah and something tells me we aren't going to grow out of Food Network, especially after descriptions like that!" I tease before continuing, "And we can always stop somewhere for lunchmeat and sandwich fixings instead of Burger King for burgers when we're out and about. There are definitely ways to appease our little food critic."

“Just seems like an awful lot of work to factor in when simply not cooking or baking as much or as often could potentially solve some of those problems."

“Maybe, but those come with a set of problems all their own too, now don't they? Are you willing to compromise any of those? You've already commented about the food quality when we've gone out to most places, so obviously you aren't willing to compromise there. So, where will you compromise? I guess the real question is, how much does it mean to you?" he comments.

“Nothing is more satisfying than a delicious meal lovingly prepared, and being able to provide and prepare that meal is a joy all its own. I suppose because this is an affair and matter of the heart that there is no compromising. It's all worth it in the end. I guess I'll keep that in mind when I'm doing dishes." I say as I dry my hands on the towel behind me and look satisfactorily at my newly cleaned kitchen counter.

The truth is, ladies and gentlemen, that hobbits do wash dishes and they do so frequently. Consider just how many times a day they eat and they do thoroughly enjoy their meals.

Every mealtime is important and valued to a hobbit, as it is with my family and me. Each meal's significance is so dearly valued in fact, that it means they're willing to do the dishes daily and sometimes even multiple times a day. As am I, though admittedly, I'm pleasantly delighted when I not only get a day off from dishes, but also a delectable meal lovingly prepared my hobbit husband. Dish wash on my fellow hobbits, and know that your service is always appreciated! May I propose a toast to good food, good drink, and being a hobbit?! Oh, drat, there's more glassware to wash now. Oh well! At least there will only be the same amount of dishes if we pour another round, so if you look at it that way it's still worth the celebration! Cheers!

More stories from E.L. Martin and writers in Motivation and other communities.