by Nishant Baxi about a month ago in bridal party 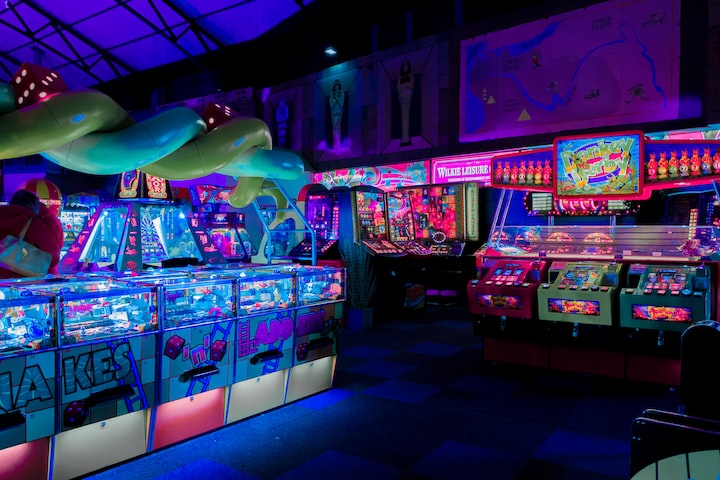 The bridal shower is an opportunity for the women in the future bride's life to honor her with a simple luncheon or get together filled with good food, fun, and games. Many bridal showers feature a series of games that are not only a great deal of fun but also allow a bonding opportunity for all of the women at the party and sometimes serve the purpose of completing a task for the bride to be.

A game that encourages the participants to get to know each other is always a fun game with which to start the party. One game you can play is known as the Name Tag Game which encourages the guest to mingle with the other guests. In this game, the hostess writes the name of each of the guests along with a word related to weddings such as veil, favors, groom, etc on a name tag. The rules of the game are that you are not allowed to say the word on your name tag or else you lose your name tag to the person who got you to say the word. If you acquire one or more additional name tags you are tasked with not saying any of the words on either your name tag or any of the other tags. If you say the word on your tag, you have to relinquish it to the person who got you to say the word and if you say the word on one of the other tags, you also have to give that person the tag plus you have to introduce them to the person from whom you had acquired the tag. There is usually a pre-determined time limit for this game and the person with the most tags when time runs out is the winner.

The Purse Game is another popular bridal shower idea. This is a simple game where the hostess draws up a list of items likely to appear in a woman's purse and assigns a point value to each item ranging from 1-5 depending on how unusual the item is. For example, car keys might be a 1 on the scale, a mirror a 3, and an eyelash curler a 5. The hostess might also choose to allow 10 bonus points for the woman who can produce the most outrageous item from her purse. The woman with the most points wins the game. Another variation of this game is to have a list of items and call out the items one at a time. The first woman to find each item and hand it to the person judging the game wins one point. After the entire list has been completed, the woman with the most points is proclaimed the winner.

Another common bridal shower game is the Television Couple Game. In this game, the hostess will read out the first names of a television couple and the guests try to guess the last name of the couple. A few examples of clues along with the answers are George and Jane – Jetson, Al, and Peg – Bundy, Ward, and June – Cleaver. One point could be awarded for each correct answer or a point system could be established to award more points to more obscure references. This game is also sometimes called the Famous Couple Game and includes references to celebrities or political figures and their real spouses such as Bill and Hillary – Clinton.

Bridal Shower Bingo is another simple bridal shower game. This game is played just like regular bingo except that instead of using letters and numbers for the spaces, each space is filled with a word or words that relate to weddings, love, or marriage such as wedding dress, favors, eternal, true, rings, etc. The host makes up the bingo cards ahead of time and puts a piece of paper with each word used on the cards into a large bowl. During the game, the hostess will draw out a word and read it allowed and each participant will mark that square on their card. The first person to complete an entire row, column, or diagonal wins the game.

One bridal shower game that can be a real benefit to the bride to be is a simple drawing. The hostess may purchase a few inexpensive gifts for the drawing and ask each participant to fill out an envelope with their name and address to enter the drawing. The hostess then picks out a name for each prize. This is a fun game because it offers the participants a chance to win a prize plus it helps out the guest of honor because she can use the envelopes to send out her thank you cards after the party.

You can see that there's practical value in learning more about Bridal Shower Game. Can you think of ways to apply what's been covered so far?

The Who Am I Game is another bridal shower game that encourages guests to interact with each other. In this game, the host prints out pictures of characters from romantic books or movies and tapes one character to the back of each guest so that other guests can see the picture but the person wearing the picture cannot. The point of the game is to ask other guests questions where the answer is either yes or no to try to determine who is on the picture on your back. At the end of the party, each guest guesses who is depicted in the photo on their back.

The Wedding Jumble is another fun bridal shower game. For this game, the hostess will prepare a list of words related to a wedding day such as toast, limousine, receptions, and vows. Next, the hostess will scramble each word so that the letters are out of order and provide each guest with a copy of the scrambled words. The guest will be given a set amount of time to unscramble the words and the person who unscrambles the most words wins. If more than one person gets all of the words correct then the person who did so in the fastest time is the winner.

The Wedding Day Obstacle Course is another game that can help out the bride. In this amusing game, each guest is timed individually on how fast they can complete a series of tasks such as wrapping a wedding favor, addressing envelopes, filling out a place card, assembling a centerpiece, or whatever other projects the bride has in progress that can be incorporated into the game. Not only is this a game that is both fun to watch and participate in but it also helps the bride to complete some of the tasks on her list.

The Bridal Shower Memory Game is also very popular. The typical way to play this game is to have a tray filled with various household items. Bring out the tray and allow the guests to study the items for a few minutes and then take the tray away and ask questions about the items such as, where the spoon was and what color was the spatula. This game could also be modified to have one of the guests to bring the tray out and then leave the room to take the tray away. You could then catch the guests by surprise by asking questions about the person who carried the tray such as what color shirt were they wearing or on which finger was she wearing a ring instead of asking questions about the contents of the tray.

The Price is Right Game can also be a great deal of fun at bridal showers and can serve to benefit the bride as well. For this game, the hostess will purchase about 10 different items that will be useful for the couple such as towels, soap dispensers, household cleaners, etc., and have the guests try to guess the price of either all the items combined or each item individually. This is not only a fun game but the bride also gets to keep the items which makes them useful for her.

You can't predict when knowing something extra about the Bridal Shower Game will come in handy. If you learned anything new about &keyword% in this article, you should file the article where you can find it again.

Criteria When Choosing Vendors For Your Wedding in Adelaide

Given the city’s welcoming culture, it is no surprise that Adelaide is also a beautiful place to hold weddings. Whether you are dreaming of a French-inspired wedding with vineyards in the backdrop or a beautiful beach wedding as the sun sets, the city is the perfect place for weddings.

Kristina
about a year ago

The day your daughter gets married is a very emotional and joyful one, and you must stand out. You've got your dress, makeup, shoes, accessories to look great, but there's one more thing—your hair! Let's help out with your hair by introducing to you, some of the most gorgeous mothers of the bride hairstyles.

Your wedding day is made a cherished memory by some of the most beautiful gals in your life. When you walk down the aisle with your life partner, a group of your favorite gals remains by your side all the time. Whether your sisters or your best friends, they stand by your side throughout the big day. Now it is time to show your affection and tell them how much their company means to you. You can show your thankfulness by gifting them beautiful floral bridal party robes.

Every little girl dreams of how she wants her wedding to be. A huge party, a big cake, lots of flowers, good music, and of course tons of dancing. This was all required for my dream wedding and as silly as it sounds, there was no way I was going to get married without it. If you would've told me a year ago that I would end up getting married in my living room with only a few close family members and friends, I would've thought you were crazy. Turns out maybe I'm the crazy one because, that's exactly what happened.

It's their day. "Ain't no party like a Lagos party, cause a Lagos party we don't bother nobody"...these were the wise words of one Mr. Banky W when he recorded and released his smash hit single Lagos Party.

4 Top Tips for Choosing Jewellery Fit for a Wedding

While your big day might be a while away given the world’s current crisis, that doesn’t mean you can’t get excited about the finer details. On your big day, it’s a given that you’ll want everything to be perfect, so, when you’re planning your spectacular wedding outfit, it’s important not to forget the jewellery. After all, accessorising with jewellery is the perfect way to complete an outfit and will help you to tailor your look to the event itself.