Bleeding for a good cause 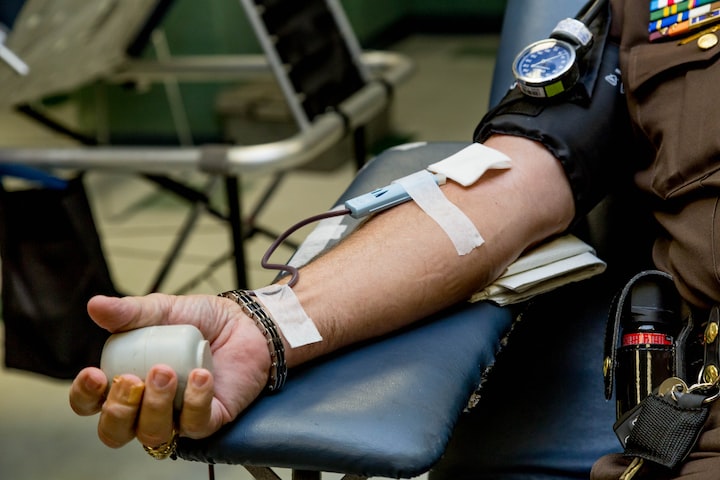 Photo by LuAnn Hunt on Unsplash

😜 I've been told that there are 135 good reasons to give blood, but for the life of me, when the tech approached me with that big-bore, suck-your-liver-out needle, humming the Flight of the Valkyrie, I couldn't think of a single one.

Now I'm not squeamish. The sight of other people's blood doesn't bother me a bit. Comes from growing up in a family where disagreements over what TV show to watch were settled with bowie-knives. But somehow, the sight of the pale, drawn faces of the other "volunteers", recovering from their own blood-donating experiences set me on edge. And it went downhill from there.

"Sir, can you open my orange juice for me?" one victim begged.

"Sure," I said, proving myself manly by ripping the foil from the top of the plastic cup. Paul Pence -- Spider smasher, cup opener, and all-around swell guy. I handed the cup back to the woman who must have a night job as a poster child for anemia. "I'm glad that the blood bank is bringing people like you to show donors how much our blood is needed."

"Thank you," she said, reaching out for the opened cup with her weak fingers, I noticed the bandage on the inside of her elbow. She had given blood! Okay, you saw it coming, but I didn't. I hadn't even noticed that she was wearing the "Bury me, I gave blood today" sticker.

Things went downhill from there.

Actually, things went downhill from the night before, when I was enjoying a quiet evening on the sofa, researching my next novel "Asleep at the Remote". The phone rang. "Mister Pence, we need you."

Ever ready to answer the call of my fellow man, even if it's not to become benevolent dictator, I said the same thing I always say to them. "Sure, I'll give blood... someday... soon maybe. You'll see."

"Mister Pence, do you realize that you always tell us the same thing? You've promised us that you'd donate thirty-two times in the last three years, but not once have you actually shown up. That's four gallons of blood that didn't go to saving lives. Mister Pence, are you a man of your word?"

Of course I am, especially when someone's got the facts to show that I'm not. "Is tomorrow morning soon enough?"

"We open at seven. And don't forget, Mister Pence, we know where you live."

The click when she hung up wasn't ominous, it was the dial tone, like what exists only in the movies.

So I found myself at the blood bank the next morning. Not quite 7AM, since the work day for me didn't start until somewhere around 10. But I did show up before they came to my door to drag me off to be exsanguinated. (Note: that big word means to have blood removed from your body. Somewhat better than "desanguinated" which means to have all the blood removed from your body. Er... my body.)

After opening the container, I plopped down into the plastic chair in front of the attendant and her computer. "Paul Pence," I announced.

"Do you have your driver's license?"

"Do I have to drive somewhere?"

"We just want to make sure that you're you."

"Oh... You want to make sure that someone who's crazy enough wake up at the crack of noon, drive over here, and have blood sucked out of his body isn't too crazy to know what his real name is. Why would he have chosen my name out of the million people who live around here?"

"Mister Pence, you're acting like you don't want to give blood today."

"Well now that you mention it..." I started to stand up.

"Just sit back down and show me your driver's license."

I sat back down and showed her my driver's license. It wasn't the that her voice had suddenly turned gravelly and two octaves lower, it's that her eyes began to glow red.

"The same it is when you call me to come give blood."

I told her. I told her my address, even though it's on the post cards they send, printed on my driver's license, and the Mafia enforcer they had hired to call me at home told me that they knew where I lived.

"No?" Her eyes glowed even more. "So you're not giving your blood willingly?"

They took my temperature, a few drops of blood from a fingertip, and then we were done. Much less painful than I expected.

"Where are you going?" Was her skin turning a little scaly? And are those bat wings sprouting from her back?

"With the questions. Now it's time to take your blood." She led me to the tables and I was instructed to lie down. "You're not going to back out are you?"

"That's good." Then she looked me over like she was judging me as USDA choice, prime, or select. "Which arm do you want?"

"Oh, a lefty. My mom used to be left handed." As I pondered the apparent non sequitur, she put a tight strap around my right arm. "I'll be right back."

That's when she showed up, humming the Flight of the Valkyrie, carrying a huge liver-sucking needle, connected by a garden hose to a five-gallon Hefty bag.

"You're not going to put that in me!"

"But Mister Pence, over the last three years, you've promised us thirty-two pints."

Did I make you laugh? Want more? Here are a few more of my humor columns on Vocal

A true renaissance man in the traditional sense of the term, Paul leads a life too full to summarize in a bio. Arts, sciences, philosophy, politics, humor, history, languages... just about everything catches his attention.

See all posts by Paul Pence →