by Cheryl E Preston 3 days ago in health

The foods we eat play a role in our overall health. 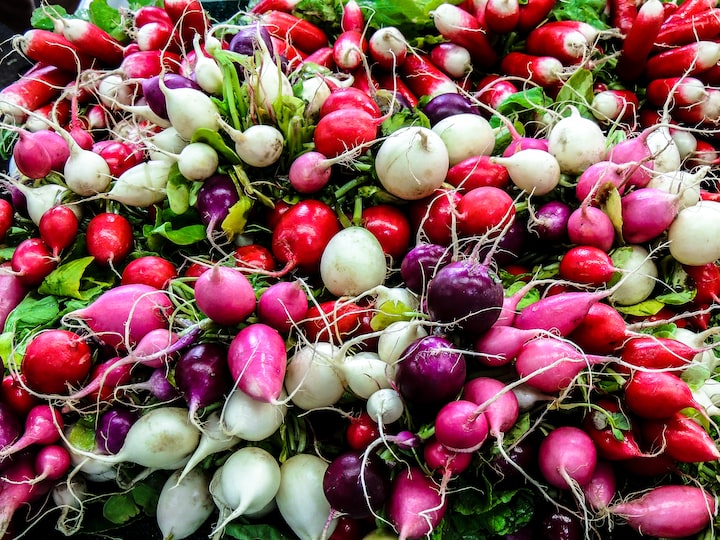 Photo by philippe collard on Unsplash

I grew up in a county where everyone had a garden and ate healthy, except me. My cousins and friends would grab veggies straight out of the garden and eat apples, plums, pears, cherries, and persimmons right off the trees. For whatever reason, I had a strange appetite and no desire to eat fruits and veggies. As I got older and began understanding the role nutrition plays in our overall health, I began trying and enjoying more fresh foods. There are vegetables that I will eat when they are together in a garden salad, and radishes just happen to be one.

Radishes come in a variety of colors and can be black, white, red, or purple. They can be eaten either raw or cooked. Radishes contain minerals such as potassium, which regulates blood pressure, calcium, and manganese which is beneficial for the regulation of the nervous system and also brain function. Radishes are a good source of vitamins C, folate and riboflavin (vitamin B2). They also are high in dietary fiber. The vitamin C content along with the ability for cleansing makes radishes beneficial for preventing viral infections. 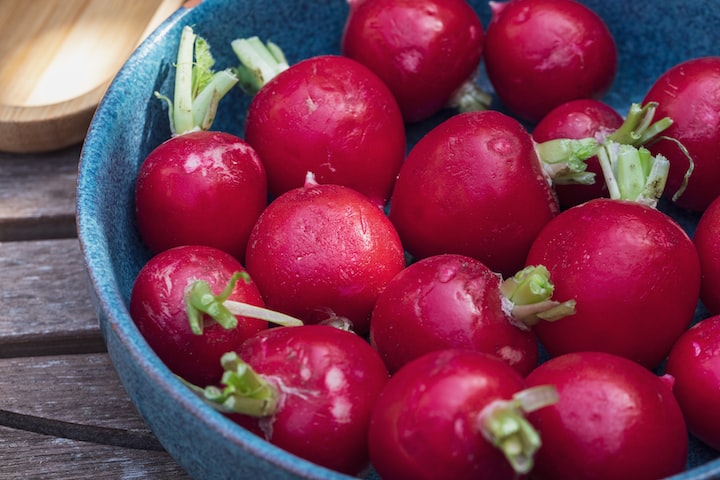 By Dimitri Houtteman on Unsplash

I enjoy the crunch of red radishes in my salads because it deters me from crunching on potato chips. There is another reason I enjoy eating this vegetable which is that it can decrease respiratory symptoms. Beginning at age 12 I began dealing with sinusitus, frequent colds, and sinus infections plus allergies. A few years ago I began having acid reflux symptoms which often caused excess mucus in my chest. I found out that radishes decrease respiratory congestion including irritation of the nose, throat, wind-pipe, and lungs. This includes issues that result from allergies, colds, and infections.

Although radishes are root vegetables they contain antioxidants that are similar to those found in citrus fruits and regular veggies. According to the website Lung Health, radishes have the ability to fight diseases and rescue cells from destructive free radicals. Radishes can also regulate blood pressure, by lowering it when it is high and bringing the numbers up when they are low. I have a personal testimony about this. Years ago I tried water pills to help me lose weight and one day I took a few extra and day I drank so much water I actually flushed the sodium from my body.

I became weak and everything began turning black. I checked my blood pressure and it was 65/48 which is too low. I crawled down the hall and pulled myself up on the couch. I asked my son to get me a banana and a can of V8, which has radishes in it. After a few sips of the juice, my BP rose to 90/55 and I began feeling a little better. After I drank all the juice and ate half of the banana my pressure was 110/65 and I knew I would be alright. On several occasions, homemade vegetable juice made with radishes helped lower my pressure when my numbers went as high as 230/140 which can be dangerous. 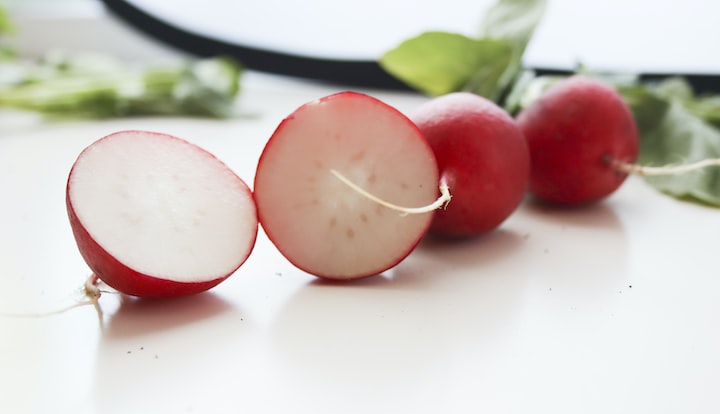 By Jo Lanta on Unsplash

I am sharing my story to validate the power of nutrition in radishes but I do not encourage anyone to try what I did unless you feel absolutely certain you do not need to go to the ER. Blood pressure spikes can lead to a heart attack or stroke and dropping too low can cause you to pass out. You need to know your own body and recognize when it's time to call 911 because this could be a life threatening situation.

According to the Lung Health Institute eating radishes on a regular basis will help relieve congestion, and also prevent respiratory problems such as bronchitis or asthma. This is good news for those who deal with these illnesses on a regular or seasonal basis. There is a saying that food should be our medicine and I agree. Eating the right vegetables is easier, and cheaper than having to pay for doctor visits and prescription medications or a hospital stay.