I Trained For an Ultramarathon -  Lock-Down Made Me do It!

by Warren Patterson 8 days ago in fitness

It was a rewarding experience; a blessing in disguise 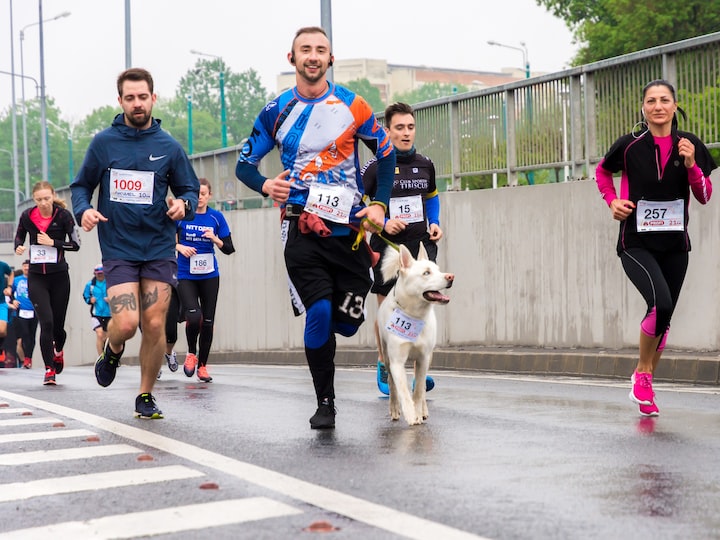 Photo by Sherise VD on Unsplash

It was mid-December, and just before I was getting tucked into my turkey dinner, I booked an ultramarathon. That's right, I booked one of those long-distance races that you'd have to be mad to do. Perhaps, in fact, I was going a bit mad. Our lock-down had just been extended for the third or fourth time - to be honest I can't really remember because it got drawn out that long.

In all honesty, it wasn't the craziest of ultras. It was a 6-hour road race. But for a newbie to the sport, it was going to be a challenge indeed. But I'm a bit of a weirdo, and this kind of challenge excites me. What could be more thrilling than running around the same 1-mile loop for 6 hours, right?

I had just had a race cancelled on me

Originally, I had booked a 10k that was due to be raced a few days after Christmas. So I was right in the thick of throwing down interval sessions every four days, and I was most definitely in my peak fitness. I had just polished off a few tempo 5ks in under 20 minutes with gas still left in the tank - I was feeling good and ready!

But then, it got cancelled. You bet, Covid! Fucking Covid, you're ruining everything. Anyway, I decided not to let that get me down, and with the fuckery of being cooped up at home for a few months staring at four stinking walls, I searched online for my next race. I thought to myself, "well the low and slow stuff is more your jam anyway - why not book an ultra?"

As you can tell, the lock-down was getting to me, and I most definitely was walking on the moon at this point. But I found the 6-hour road race and made that my next project. I went ahead and booked it.

Hitting the trail to train

Up until that point, I had never ran a race longer than a half marathon. I knew this would be a different demon. But I've always been pretty decent on the stamina front, and I knew I was more suited to the long game. The only thing that crossed my mind that could possibly let me down would be picking up an injury- did I have the legs for it? That thought was to be continued.

I trained at a park nearby, where I done some of my running at that stage anyway. I liked it because there was a 1-mile trail that looped round it, and I also had the option to run on the the grass that graced both sides of the trail. Perfect! It would keep me off the roads so that I could work on increasing my weekly miles, while not risking doing damage to the old knees.

I jumped right in and added 10 miles on to my weekly training plan straight away. Before training for this race, I was running a comfortable 25 miles per week, which included one interval session. I knew I had more in me, and so I stepped up the game a little.

My weekly average of 35 miles followed that same 1-mile loop over and over again. In the beginning, there was no speed training involved. My average pace per mile was somewhere between 8:00 and 8:15. I ran between six and eight miles per session, five days a week; and I felt good!

At the start of March, about two full months into my training, I brought back some intervals. It was nothing crazy. I warmed up with two easy miles, ran 3x1 mile repeats at a goal pace of 6:20 per mile, with one mile easy pace in between.

I was really started to get into the flow and this wasn't testing me too much. I wasn't feeling the effects of burnout or fatigue, and my legs were hanging in tight; there were no aches and pains. Nothing could be going better. I was becoming very positive about the race. I chucked in a 10-mile morning run after eating 9 bacon rashers, and I was well and truly full of beans.

My diet plan was simple - eat as much as you want and eat low-carb. Before I trigger anyone, yes I follow a mostly ketogenic diet. It works for me, especially on the track, trail and roads. It's the optimal diet for me when I run, period!

In fact, I took it one step further and ate close to a carnivore diet. I didn't go the full way though. My diet consisted mostly of meat, some fish, dairy and dark chocolate. That's right - I kept in chocolate, because that's what I like and helped me stay on my plan.

Every day, I ate a simple dessert that was a tub of Greek yogurt with crushed up pieces of dark chocolate mixed in, and I loved it! I devoured steaks, bacon, pork belly, and chicken wings smothered in tallow or butter. It was delicious!

My race got cancelled.. Again!!

After all the miles I put in, and all the steaks I ate (I had to eat so much food to keep up with the training), my race got cancelled once again. After three months of slogging it out, I had this gut instinct that it would have been cancelled, or at the very least postponed.

OK, so actually it did get postponed, and so it might sound like a bit of an over-exaggeration. But the original date got wiped off the cards, and unfortunately for me it didn't suit that they had moved it back from June to October. I had plans to start my weight loss coaching business in the summer, and I really needed the race to go ahead as originally planned, so I could put it behind me and focus on the business.

What I learned from the experience

Here's what I learned from the whole experience:

The question I ask myself after the whole experience is, "what's next?" The truth is, I struggle to sit still. I find it difficult to be just content with ordinary things, and an average way of living. I need to test myself, and test myself again. I feel like I can't stop this urge within me.

I come from a place where I used to think I was a quitter, and I fear about going back there. It ruined my mental health. But I regained my strength, and it only came through setting myself difficult tasks, and overcoming them each and every time.

I don't know what the next step is just yet with respect to my fitness, but I sure as hell can't wait to find out.

Receive stories by Warren Patterson in your feed
Warren Patterson
Read next: Weight Loss Story: "I lost 21 pounds without going to the gym and just doing intermittent fasting!"