by Carlton Burns 2 months ago in health
Report Story 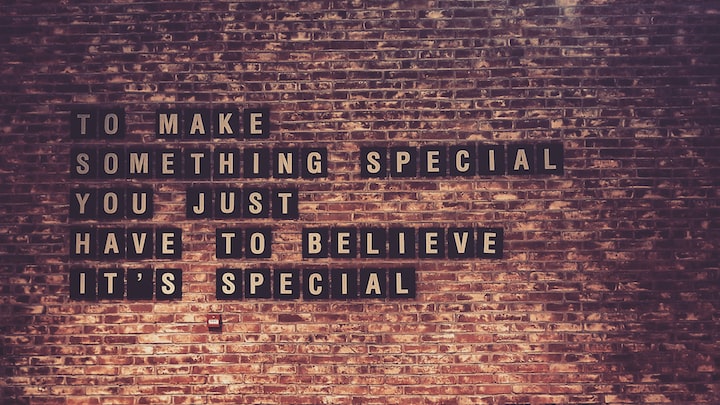 Photo by Mert Talay on Unsplash

Yes, you've read correctly. Affirmations ARE easy and they're only as hard as you make it to be. There are at least thousands of articles on affirmations at this point, but not all of them may connect to a person that's fresh to the subject. Or even explain the subtle science to how it works.

There's more in depth information out there in books (which I'll reference later) that are a must have for any individual wanting to help themselves, but an opinion on the topic can help inspire the reader more. My perspective is based on personal study and practice.

Affirmations are more than just saying words repetitiously and "hoping for change", its about reprogramming the subconscious mind in order to produce a physical result. Yes, programming is all you're doing to yourself--the only difference is that you're in control!

We've all been programmed by other influences, the first being our parents. They guide us in life teaching us what to do, and what NOT to do, to the best of their ability. Either with stories of them going through what they don't want you to experience, or through spankings when we get out of line.

That doesn't mean that all they learned from their parents' (programming) was perfect, but as humans we should grow and learn from old teachings to produce new and wholistic ones.

Generational curses play a role for the fact it implies a programming. As an example, being told that different health problems run in the family. Not to say it may not be true to those ALREADY afflicted, however, repeating that over and over sets up the mind to accept defeat instead of a healthy life.

Health is important, so taking care of the body is a must. Keep in mind that mental health is also important, as it shapes the perception of a person's reality and experience. And when dealing with generational curses, the only way to break them is to change the programming.

There are a multitude of techniques to use in regard to influencing the subconscious, and using affirmations is the easiest for anyone. A word of warning before I get into the practice. It's important you are mindful of the words you use, no matter if you speak it verbally or mentally. Words hold power and that power should be used consciously.

When using affirmations you can always come up with whatever it is you want to program yourself with. Happiness, success, wealth, prosperity, health--just to name a few. But the list can go on depending on you. It's suggested in a few books to speak them as if they're already presently happening.

That's so your mind doesn't keep projecting these desires into a reality that's just out of reach. For example saying: "I wish to be rich" or "I wish for love." These are natural desires for anyone. The problem lies in the word wish, which subliminally implies to your mind that it is just that. A wish!

The method I learned is to say, "I Am...(Rich)", instead. Not just saying it, but putting as much emotion and visualization into these words as well. This sends a command to the mind to carry out this program and to bring its physical equivalent.

It's known that the mind can't tell the difference between what's real or imagined, so speaking the desires you want in such a fashion that you convince your mind it IS real, starts to shift things into that reality.

However, just repeating these affirmations doesn't replace the effort you must do on your part to bring it to fruition. Yes, you must take action, inspired by your desire, as fuel to produce that outcome. And only you alone can do it.

The effort you put in is equal to what you'll receive in return. So using affirmations as a daily routine is a must, if you want to start seeing results. Repetition is how programming is done. Think of your favorite commercials' jingle to get a good idea. They're easy to remember for a reason.

Hopefully this quick tip on affirmations helped, if so, please like and share it with friends and family. Don't forget to view the resource list at the end.

Hidden Power How to unleash the Power of your subconscious mind By James K. Van Fleet

The Power of Your Subconscious Mind by Joseph Murphy

As a Man Thinketh by James Allen

More stories from Carlton Burns and writers in Lifehack and other communities.