The Good News is, You'll Win. The Bad News? You Won't Be As Cooled Down As Everyone Else. 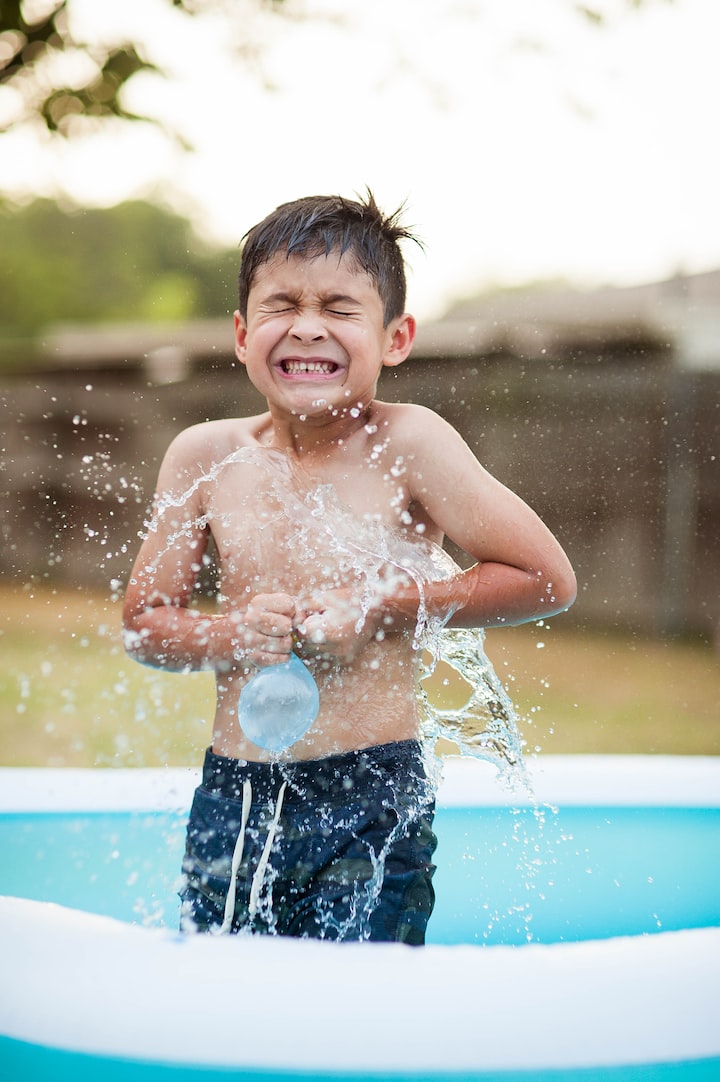 Photo by James Balensiefen on Unsplash

I woke up this morning with a notification on my phone I hadn't seen before. Tucked amongst my widgets appeared an Excessive Heat Warning, the first of the summer in my town.

I groaned... I moaned... I hid under the blankets, but soon kicked them off because it was too hot under there.

I like sun and the outdoors as much as the next guy, but 95 degrees? 95 would make even a Cali resident grab their shirt collar to air it out, frowning.

Yes, yes it certainly is.

There's only one remedy when the sun's decided to melt us to the sidewalks. We have to cool down. And when the ice-cream truck's soothing song is nowhere to be found, what's the alternative?

Your first thought might to be retreating inside to the cool, loving arms of the A.C., but, as you probably know too well...

This is the first summer after quarantine.

I know I'm not the only one starving for Vitamin D and the strange prickly feeling on your arms you get when the sun hits you.

And so I bring to you... the true solution.

Or, for our intents and purposes, Water Balloon War.

Generally, the masses would agree that having a nice burst of cool water in your face would be truly welcome as the degrees tick up to unbearable degrees this summer. But to win a Water Balloon War is to be untouched by the liquid relief thinly contained by colored rubber.

It is up to you to decide what your fate is. If you want to cool down, your task is to read and actively disregard these techniques. But if your thirst for victory is as intense as your thirst in the heat, then take this list as your new strategy manual.

Some strategies begin before the game even does. When filling up your ammunition, favor making the balloons bigger rather than smaller. The bigger water balloons not only have more water to soak your enemies, but they burst easier, while their smaller, less-filled counterparts are more likely to bounce off the squishy human target.

NEVER use normal balloons meant for helium, because they are near-impossible to break against someone unless extremely overfilled. Not only are these monster-balloons really heavy and practically impossible to truly throw, it'll probably hurt, too, which will make you an instant nemesis.

NEVER use the Shirt-Bowl Technique

Avoid this "technique" at all costs. It is fun to do, fun to see, and cools you off, but this is war. This technique is too risky. You lose the use of at least one hand, and if you bump into the enemy, your ammunition will burst between your bodies like a grenade, taking you both out.

This one is for all the Slytherins out there. Making allies in war is an excellent tactic to divide and conquer, gang up on weak enemies, and dominate the playing field. However, you're in it to win, so you'll betray this ally when it's down to the two of you. The "Hey, someone's behind you!" trick might be an excellent one to try here (modified to "Hey... I thought they were out already") because you can stab soak them in the back and be victorious before they can realize what happened.

This is ONLY a before-the-fight strategy, because during-fight alliances are always looked at with suspicion. If you make allies after the fight begins, expect your ally to attempt to deceive you in this same way.

During The Fight Techniques

The fight has begun. It is now your time to shine. You must be ruthless in this war; have no mercy for your enemies in order to be victorious. May your wrath be swift and aim be true.

4. Aiming For Objects Not People

Your enemies will scatter and scurry like mice. They can be fast and many attempts to aim for them will result in lost balloons. If you have an opponent running along something like the side of a house, a brick wall, or any other hard structure, calculate their trajectory and aim for their destination on the object. This technique is a great use of your smaller water balloons that are less likely to burst when they hit a person, because they will burst against the harder object and spray the water in all directions. You can also end up hitting more targets than just one with this technique, if planned correctly.

While grass is great for breaking larger water-balloons, avoid aiming for grass. At best, you'll only wet your enemy's feet, and at worst they will easily dodge or jump away and you will have lost a water balloon and given them an opportunity to strike back.

Distracting the enemy gives you ample opportunity to take advantage of their lapse in attention with an attack. This works excellently when paired with the "Fake Ally" strategy, because your opponent will be more likely to trust in your misdirection than an established enemy. An excellent technique is to feign defense, as if there is another player approaching to attack. Look behind them without saying anything and get ready as if to defend yourself; if they look to do the same, turning their back on you, this is your opportunity.

You can also use this technique in moments where you are being pursued; draw your enemy away from you with noise in your opposite direction to give yourself time to get away and refill your ammunition.

The greatest attack is the sneak attack, where your enemies have no chance of defense before their fate is sealed. Sneak up on your opponents with quiet steps or hide in unexpected places to ambush other players. This technique is one well-loved by the less-confrontational sportsman, lending itself conducive to long, opportunistic waiting; or quiet, stealthy marksmen.

For this strategy, make sure you have silent clothes. Cargo shorts, coins in your pocket, or even bellbottom jeans can give you away if your target is in earshot. Shoes matter too! If your feet are wet, sneakers might squeak and give you away.

As the most savage dodgeball-type move you could possibly pull-off, rerouting someone's attack by catching their balloon is truly one of the most satisfying of these strategies. When pulled off correctly, you'll not only gain the respect and fear of other players, enemies will think twice before taking you on face-to-face again for fear of tasting their own medicine.

This should always be a last resort, because 9 times out of 10, the balloon you attempt to catch will burst in your hands. Be aware of this. Attempting this strategy when you are fully stocked with balloons, easily able to dodge your enemies, or have other options is a huge gamble and not advised.

The greatest tragedy of Water Balloon fights is the fact they end so soon. It feels like only seconds have passed before you've thrown away your entire stash and have to resort to stalking the other players for unfortunate dropped balloons that lay unpopped in the grass. Often, this results in a desperate scramble that, most of the time, ends up with you soaking wet. The best strategy is to avoid taking a shot entirely until you are certain you will hit your target. This will not only prolong the game because your opponents will get away more often, but it will save your stash for the most pivotal moments of the game, where your enemies have no escape.

Have a water balloon wound up in an about-to-throw pose all the time as you wander around the playing field. Winding up takes a lot of time, gives your opponent a clear warning on what you're doing, and allows them to get away before you have a chance to properly aim. By constantly being "loaded", you won't have to waste precious seconds on anything other than locking on and letting loose.

I dub this the "Banana Peel Technique", despite its glaring lack of bananas and peels. I can't count how many times in a battle I've slipped on wet grass. It doesn't hurt, but it does give you some pretty gnarly grass stains. If you have a penchant for planning ahead, you can sacrifice a water balloon or two in hopes of your opponent running along and slip-and-falling into your trap. Oftentimes, this technique will be set up by fate itself, with happy accidents happening all around the playing field as more casualties soak the lawn. If anything, this technique is a warning to tread carefully on grass where your enemies have fallen.

This is only acceptable on grass where players are unlikely to be hurt. Concrete, asphalt, or wood are unacceptable surfaces to try this on, because any falls on these can easily result in injuries big and small. The game instantly ends when someone gets hurt, and it is your duty to stop the game and help the injured. The only pain caused from this technique should be the pain of having to pre-treat grass stained clothes before they go into the laundry.

You've seen the Matrix dodging-bullet gif. You know what you must do.

Dodging is the easiest, fastest, and most effective way to evade attacks, and absolutely essential if you are to win against victory-seeking players. Dodging is easier the farther away you are from your enemy, so for the most effective use of this technique, keep your distance from attackers so you have more time to leap out of the way of incoming water balloons.

Shields can also be good tools, allowing you to "dodge" without moving. A shield can be anything from a laundry basket to a nearby wall to hide behind; anything that acts as a barrier between you an the water balloon.

And there we have it. That wraps up all my hard-learned strategies from my many years of annihilating (...and being annihilated) in the magnificent world of Water Balloon fights.

Go forth with this knowledge and conquer your enemy; whether it be your fellow players, or the oppressive heat that summer's just begun to unleash.

If you liked this story, feel free to leave a heart, or, if you want to blow my mind, consider leaving a tip!

If you're interested in more from me, check out this resource piece listing websites to find copyright-free photos!

or take a look at my info-article about my favorite phallic flower!

From writer during childhood to artist as I've aged.

I'm passionate about using both in my storytelling.

Sometimes I illustrate my stories here; check out more at @aidengrahamcole on Instagram