by ubaid ullah 2 years ago in list
Report Story

Difference Between PV Diagrams Of 2 And 4 Stroke Engines 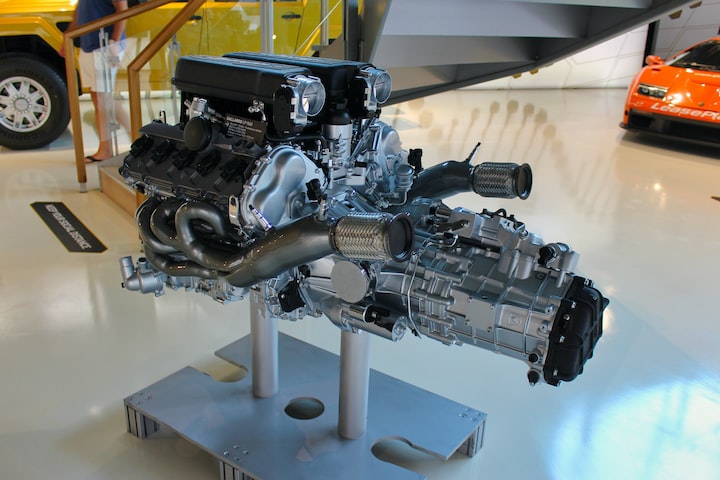 Photo by Gab on Unsplash

What Is 2 Stroke Engine?

Is a type of internal combustion engine that completes a power cycle with just one revolution of the crankshaft and two strokes (up and down movements) of the piston. The end of the combustion stroke and the start of the compression stroke happen simultaneously in a two-stroke engine, with the intake and exhaust functions occurring at the same time. The power-to-weight ratio of these engines is typically very high.

The entire movement of the piston around the cylinder in almost any direction is referred to as a stroke. Intake, compression, combustion, and exhaust are the 4 main strokes.

What Is 4 Stroke Engine?

A heat engine is an internal combustion engine. Its operation is based on the variation of pressure and volume within the engine's cylinders. Both heat engines are described by a pressure-volume diagram, also known as a PV diagram, which demonstrates the variation of pressure in the cylinder as a function of volume over the duration of an engine cycle.

Furthermore, the work performed by an internal combustion engine is directly proportional to the difference in pressure and volume within the cylinder.

The pressure-volume (PV) diagram is created by calculating the pressure within the cylinder and plotting its value against the crankshaft angle over the period of an engine cycle.

The following explains what happens during each phase on the PV diagram in which the combustion of the working fluid gasoline and air (oxygen), as well as often electricity, changes the motion of the piston:

Process 1 to 2: The air intake port opens during this process, and the piston is drawn up to compress the fuel-air mixture that has reached the chamber. The compression allows the mixture's pressure and temperature to rise slowly, but no heat is transferred. This is referred to as an adiabatic method in thermodynamics. As the cycle reaches stage 2, the spark plug comes into contact with the fuel and ignites it.

Process 2 to 3: This is where combustion happens as a result of the spark plug igniting the fuel. At stage 3, the gas combustion is final, resulting in an extremely pressurized chamber with a lot of heat (thermal energy). This is referred to as an isochoric method in thermodynamics.

Process 3 to 4: The thermal energy produced by combustion in the chamber is used to do work on the piston, which forces the piston back, raising the volume of the chamber. This is often referred to as the power stroke because it is the process by which thermal energy is converted into motion to power the engine or vehicle.

Process 4 to 1: All waste heat is ejected from the engine chamber in processes 4 and 1. The molecules lose kinetic energy when the heat leaves the gas, resulting in a drop in pressure. (nine) A two-stroke engine does not have an exhaust step, so the cycle starts over (1 to 2) by compressing a new mixture of air and fuel.

The Following Diagram Shows the indicator diagram of a two-stroke cycle diesel engine. The suction is represented by lines 1-2-3. (i.e from the instant inlet port opens and inlet port closes).

This occurs as the piston rises from 2.3. At 4, the exhaust port V - closes (EPC) a little above 3. Line 4-5 represents the compression of the air inside the engine cylinder.

The ignition dramatically increases the volume and temperature of the combustion products. However, as seen by lines 5-6, the pressure essentially remains unchanged. Lines 6-7 demonstrate the expansion. At this stage, the exhaust port open (EPO), and the burnt gases are exhausted into the atmosphere through the escape valve. It helps reduce the pressure.

If the piston moves closer to BDC, the number of burnt gases increases from 7 to I. At 1, the inlet port (IPO) opens and the suction begins.

A four-stroke cycle petrol engine's indicator diagram. The suction stroke is shown by lines 1-2, which is located below the atmospheric pressure line. This pressure differential is what causes the fuel-air mixture to enter the engine cylinder.

The inlet valve provides protection to the incoming charge. As a result, the charge cannot reach the engine cylinder abruptly. As a result, during the suction stroke, the pressure inside the cylinder remains somewhat lower than the atmospheric pressure.

The sparking dramatically raises the pressure and temperature of the combustion products. However, as seen by line 3.4, the valve basically stays unchanged. Line 4-5 depicts the expansion stroke, in which the escape valve (EVO) opens just before 5 a.m. (i.e. B.D.C). The burned gases are now ejected into the atmosphere through the escape valve.

Line 5-i, which is above the ambient pressure line, depicts the exhaust wave. This pressure differential is what causes the burned gases to exit the engine cylinder. As a result, during the exhaust stroke, the pressure inside the cylinder remains slightly above the atmospheric pressure line.

More stories from ubaid ullah and writers in Journal and other communities.