The truth about psychics

by Erin King 2 months ago in advice
Report Story

Why you should spend less money on them 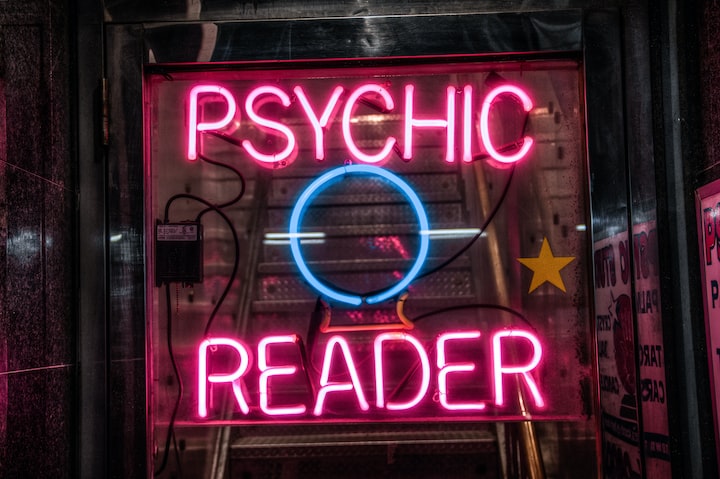 I don't know if i really should be sharing this story publicly. I was struggling as a person emotionally and that made me go down in a spiral.But i want to share this story from people who have secretly gone to psychics because you are struggling emotionally.

I was 19 years old and it was 2017. I was lost in my life. My mum moved interstate and i felt i was struggling to settle down there. My parents were still talking to each other. I ran away to Sydney but i have written before i have learnt my lesson about staying with housemates in my ' housemate nightmare story'

I had a crush on a guy and i was sexually attracted to him. I ignored my mum's advice about this. I thought this guy was cute and i wanted to date him. I don't even talk to him anymore and we are not on social media following each other.We talked a lot and we had a sexual chemistry. He was a dick. I fell for a bad boy when many people thought he was decent and nice.I do not hold any ill feelings against him. I just avoid him , when we are in places with mutual people we know.

I was emotionally drained from him and i did not focus on my career. I was foolish.I went to Penrith and I saw this lady who was half my age , but younger than my parents.She warned me and said " he will see other women " . Told me the guy was " nasty " and " narcisstic". I have realised he was'nt worth it.

I had problems with my father. I was struggling emotionally. She was 5 years younger than my father. I do not want to talk about much about family feuds but yes i do talk to my father . But I limit how much i talk to him or we will fight too much.She predicted once that i was "going to argue with my father".

I remember this psychic in Penrith , she claimed that the guy i ' liked ' at the time had an STI. She encouraged me to ask him and get tested. I did'nt want to ask him that because i knew he will get upset over it. It was a horrible rumour to talk about someone , because i knew i had no way of proving that he had a STI because under medical law . it's illegal to access medical records. The medical records are kept between a patient and a doctor. It was'nt my business to know even though he was a dickhead.

I went to a psychic online and he was from the US. Italian and he was 10 years younger than my mother. He was LGBTIQ and queer friendly. I told him about the unethical work practices she was doing.He told me the " STI " rumor was a horrible thing to say to a client. He had a gut feeling the woman i was talking to had a bad love life. I spoke to him again but not too much . He told me that the guy i 'liked' at the time was'nt the right guy for me. He told me to go on dating sites and talk to other men. I was unsure to try his advice but i went for it. It worked on me in some ways.

The psychic cried so hard that her boyfriend cheated on her and she had a terrible love life.She could'nt focus on work. This happened after she told me about the STI rumor. Eventually i realized it was a good thing because it taught her to focus on her love life instead of giving bad love advice to women.

I rememeber in early 2020, this lady and me visited each other in Richmond , NSW. We talked in a pub before i did my reading. She was complaining about her boyfriend , she wanted to kick him out of the house because of verbal abuse . The boyfriend called her a " fat whale " and she complained " It's going to be hard to for myself to pay rent, my boyfriend pays the rent ". She put his stuff away at the front of the house. She grew up in Austral , around Liverpool. She loved the farm life.

She was so unhappy in a relationship , why can she be more happy and live her life on her own terms?

I started talking to a guy on Oasis and he was hearing but had a physical disability. I will not disclose his name let's call him Martin. We started talking a lot from Feb 202o. I was talking to the psychic about this guy. She claimed that this guy wanted a hook up and he wanted sex. She also said to " let him go " and " he's too busy to date you " .

Apparently she also said that he thinks i'm sexy. I was skeptical until i got his side of the story. I lied to him at first that it was a friend who told me , but eventually i told him the truth it was a psychic. He said online ' I understand why you did'nt tell me it was psychic because I don't believe in psychics'

After i told him about her claims. He said online 'the part that made me angry, that I am getting judged by someone who does'nt even know me ' . He also said online 'it's was'nt true that he wanted to hook up with me and he said it's not safe to do it with randoms in many ways '. I believed him because he was genuine.

The psychic had this false impression of thinking i was interested him romantically. But this was'nt the case. Firstly , we started talking online and I see him as good friend of mine who i go for advice about men , dating and other topics.

She had a room rented in Richmond NSW. During the wintertime of 2020. She quit doing readings. I had no idea why she eventually quit. I found it weird that she was complaining about her love life and she quit on a job. She had a son who is a minor that she needed to support along , and she needed to be financially stable. To get away from a bad love life and not to rely on a man. Maybe she was sick . I wish she explained more and that i can understand why.

Are psychics really worth the money when you are struggling emotionally?

- Not really , but's easy to fall into the trap

- See them less like a few times a year

- They can give you some unsolicited advice , when it's your own decision to make.

- Some of their advice can be great

- psychics on kasamba should'nt be charging a large sum of money to talk to them ( they charge by minutes ) . It's abusurd. For example $28 dollars a minute.

- they should make a fair reading price does not matter online or face to face , because do not want to have false hope . You may regret paying a high price for readings because they can have negative outcomes.

More stories from Erin King and writers in Journal and other communities.