A 600-meter-deep chasm gaped under the feet of the trapped miners. Only one man could save them… 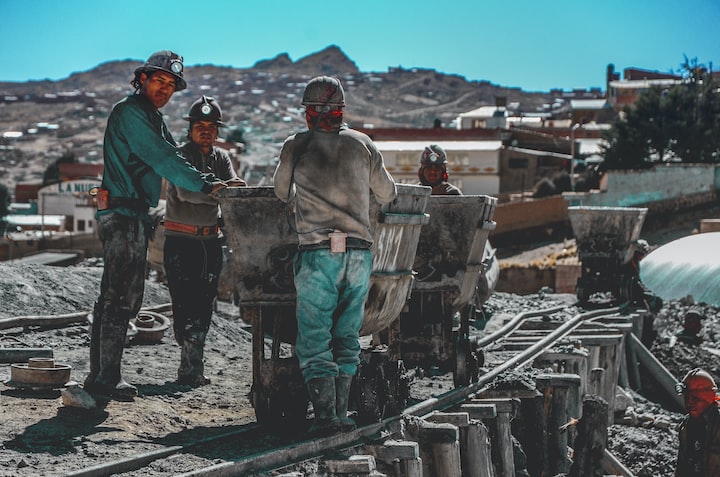 With a tight grip on his helmet and a few sandwiches in his hands, Mario Cockrell rushed towards the mine shaft, trying to fight his way through the crowd of miners.

Many people threw him by the way: "You're late again!"

The doors slammed shut, the signal bell rang and the cramped two-level elevator began its sixteen-minute descent down the mile-long President Steyn gold mine in Welkom, a town in central South Africa. It was the early morning of March 23, 1993.

The elevator, known among miners as the "Mary Ann," carried 21 men, whose helmet lights illuminated its aluminum interior. Everything went smoothly for ten minutes, when suddenly the elevator got stuck. Still, that didn't worry Rassie Erasmus, the gray-haired operator who knew "Mary Ann" better than any mine.

However, Mario wasn't so convinced, especially since he suddenly heard a strange clapping sound from the darkness above their heads. He realized immediately: large coils of heavy steel wire were peeling from the ceiling, and the huge winch that lowered the elevator was spinning out of place.

"Whatever's jamming the elevator could give way at any moment," Mario thought. "And if the cable from the top comes loose in the meantime, this two-and-a-half-ton cage will be sent into free fall!"

He pushed the door open with all his strength and peered out. The lamp on his helmet illuminated the very concrete wall - about a meter and a half away - that stretched 800 meters down.

Fortunately, the elevator stopped exactly in the plane of the support beam that protruded 45 centimeters from the wall. Stepping cautiously onto it, with his back to the abyss, Mario stepped out of the elevator and kicked the debris over the edge, but he didn't hear any sound when it fell to the bottom. Leaning over the chasm, he saw a cluster of pipes standing upright around a beam.

Every look at the bottom chilled his bones - the shaft seemed to be lost in infinity! Every three meters there was a row of transverse beams, and every sixty meters you could see a platform from which a brightly lit tunnel led to the working station of the mine. But, due to the change of the night shift, all the tunnels were empty.

Then Mario felt a tremor that made the carriers themselves hum. An increasingly loud roar foreshadowed an accident. A pile of rocks and dust fell on his face as he looked up for a moment. He saw something he didn't like: Another elevator was approaching - "Cage 6" - carrying tons of gravel for cement! Mario realized that he was going to pass right by them and, to make the disaster complete, he would hook onto the cables of the "Mary Ann" and pull them with him into the abyss.

About ten meters below, the tunnel known to everyone as the "37th level" was clearly visible, equipped with a telephone line and an emergency button, which stops all elevators in the shaft when pressed. Just, how will he get there?

Mario's gaze again fell on the upright pipes. Most of them were too bulky, but there was one made of steel - for water - which was barely three centimeters in diameter and coated with crusted, dried mud. He clung to it and rocked his legs. Then he loosened his grip. For a moment he felt free. He gripped the pipe tightly again to push himself away, but the rough, sharp surface of the dry mud tore at the skin on his palms.

Halfway from the crossbeams he felt the pipe bend and separate from the wall. He let himself fall and - the soles of his heavy boots finally touched a stable surface.

However, he was still about a meter and a half from the platform. He took the widest step he could across the chasm and grabbed the gutter on the other side, unaware that it was very loosely attached to the wall.

At the same time, gutter completely separated from the wall and found itself in Mario's hand. Staggering in the air, carried away by inertia, he leaned forward and, by crazy luck, touched the edge of the platform with his foot. He dug his fingers into the door and retreated to the opening with his whole body, all the while listening to the terrified screams of his fellow miners.

"The panic button should be in the glass red frame screwed to the wall," he recalled to himself.

Then he saw it, completely black with a thick layer of dust. At that moment "Cage 6" roared right next to "Mary Ann" with a thunderous roar and, pulling the cables, filled the entire shaft with dust, sparks and fallen rocks. Mario thrust his fist through the protective glass and pressed a button.

He called the supervisor on the phone, to whom he just shouted: "Stop! Don't let anything go!"

The other miners, trapped in the elevator, have almost resigned themselves to death. When the dust settled a bit, Rassie Erasmus looked down and was startled by the sight: Mario climbing back towards them, hand after hand.

Entering the elevator, he found them frightened, with rolled eyes, and calmly said: "Everything is fine. Everything has stopped. Now we can get off," but no one dared to move.

He decided to encourage them by his own example. He frowned and shouted in a serious tone: "Look at what I'm doing and follow me!"

Just as he began to descend the tube, the light of the lamp on his forehead illuminated something that followed his blood in his veins: the rails under the elevator had completely buckled and thrown him off the track. One corner was hooked onto the support, so the weight of the entire elevator full of people was supported by a few screws and a few centimeters of thin metal. If they don't go down soon, they will all die!

Mario stood up to them and gritted out, "This thing is going to fall at any second. Don't touch anything, just hold your breath and follow me down the pipe!"

Again - no one moved. Determined to rescue them even against their will, holding on to the pipe with one hand, he grabbed the jacket of the tiniest of the miners, a young man weighing about sixty kilograms, and pulled him down. The boy screamed in fear and tried to hold on to the beam. But Mario was not one to suffer disobedience: he punched the miner in the ribs! He grabbed him again by the jacket, so confused and frightened, pulled him over the edge and kept him in the air.

Emboldened, but still trembling with fear, he wrapped his arms around Mario's torso and finally let go to cling tightly to the pipe. Very slowly and carefully, they descended down it and reached the beam of the 37th level.

"You will release the tube exactly when I say so, okay?", Mario's determined voice echoed through the shaft. The young man nodded uncertainly.

Then he swung him over the precipice and threw him onto the platform. He blew the dust off his bloody palms and, hand in hand, made his way up the pipe again. It was his assistant Jan Buys turn. With some difficulty, he too ended up safe, despite his stocky build. That sight encouraged the others to break free.

So the thirteen miners, one by one, found themselves in safety, with the help of Mario, whose bloody hands were shaking uncontrollably, and the severed limbs burned as if he had plunged them into lava. Finally, he found himself among them, on solid ground. They welcomed him with shouts, hugs and tears. In a few minutes, a group of mining engineers and supervisors reached them and pulled them out of the shaft without difficulty.

Six months later Mario Cockrell received an award for bravery from the South African mining industry, but no award is as telling as the stories the miners tell of the strong savior of so many lives, who, despite his injured hands, led his friends from the underground darkness.

More stories from Maky Jonas and writers in Journal and other communities.