Is Medium Worth Using

by Aaron Dennis 6 months ago in advice

Medium is a bunch of crap. You can’t get anyone who doesn’t already follow you to read your work. You can only get paid if the curators decide your stuff is worth selling. No one ever goes to Medium to find new articles or writers. I have never received a search engine result, which led me to an article from Medium.

When Medium first sprung onto the scene, I was very excited. I liked it very much; Medium let me do in general what Quora allowed me to do with my Quora blog, but my Quora blog was supposed to be an extension of my Quora answers. For instance, I’d get a question on Quora, give a simple answer, and then explicate through the blog. In that fashion, people got their answer without any extra fluff or personal bias, and the people who liked and followed me went to the blog to read more. Then, of course, Quora began collapsing my answers.

I tried to find out why. It was claimed that I wasn’t supposed to use the Quora answers to redirect people to my personal site. That wasn’t exactly what I had done; I had answered a question, and then provided a broader example as to how I reached my answer, which was on my website.

They didn’t like that, so I showed them screenshots from other Quora writers who did the same thing. It was still a no-go, so I left Quora to use Medium, and at first, everything was great. While Medium doesn’t have a “questions” platform, you can blog about anything, and back during its infancy, anyone could read what I wrote, finding it through hashtags, but I always noticed that despite having a modest following, I wasn’t getting one one-hundredth of the views I had been receiving on Quora. Never mind the fact that my Quora followers often asked me questions directly, because they wanted my answers.

Well, Quora has always had way more users; and that’s readers and writers, not just writers. No readers go to Medium. No readers are directed to Medium. Writers have to direct their audience to their articles through “friend links” with one new exception; the Medium curators might decide to feature your work, in which case you can reach new readers, but who decides what’s worth reading?

As I mentioned above, I have never Googled a question and received a result, which led to an article or post on Medium, but tons of results refer Googlers (is that not a word?) to answers and blog posts on Quora.

As you can see in the image above, there is a search result from Quora, and this is the first page of the results from my question.

Furthermore, when I’m done writing an article on Medium, and I get to tag it, the numbers of interests associated to the tag are always low, like 20k for the tag “writing.” That’s low. When I was on Quora, the “writing” tag had over a million interests, but as I said, Quora has more readers.

Second, what’s the point of tagging a post that no one who doesn’t already follow me can see? If the tag doesn’t invite new readers, why tag the post? You hashtag something on social media, so people who don’t follow you can still stumble across it; it’s never a huge influx of new readers, but it’s an influx nonetheless.

This is why people tag their tweets with whatever is trending for that day, like “Sundaythoughts”; if you tweet every morning, you can hashtag your tweet for that day: “Mondaythoughts,” “Tuesdaymotivation,” “Wednesdaymorning”; these are all viable hashtags for people who are not your followers to find your work by searching for that hashtag and its correlated tweets. You follow me?

Finally, I do have one good thing to say about Medium, but it’s a mixed bag. It’s like a garbage bag filled with dead flowers, fresh bacon, and your brother’s up-chuck from last night’s bender; some of it is nice. A lot of it isn’t… Sorry, about the barf. That was gross… 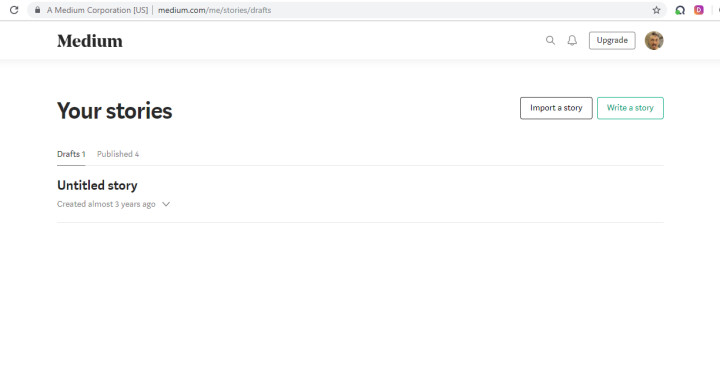 On Medium, you can go to your profile and click stories. Don’t click new story when you write, just click stories. It provides the opportunity to “import” a post from anywhere else on the internet. You just copy and paste the url. Then, the post gets imported. At the bottom of your imported post, Medium shows the url, and the original date of publication, so everyone knows it’s not a Medium original, but, hey, your stuff is on one more platform, and if the curators like the post, you can get more readers and a few bucks.

Unfortunately, every time I have imported a post, most of it doesn’t come through, and none of the pictures come through, so you’ll still have a lot of work to do after importing, should you choose to import. I often trash my original articles, which I type on Word, so I no longer have the originals for repost, and I usually get my pics directly from a website I’m referencing in my article, so I have to find them all over again.

Well… I used to use a FaceBook author page, and it was crap, so I stopped using it. Times changed. Technology advanced. FaceBook got better with their FaceBook business page feature, and now I use FaceBook again. I thought maybe Medium had made some changes—they did—and now I want to see if it can help me reach more people, and make more money. I’d be stupid not to give it a shot, and besides, don’t you want to know what works, what doesn’t, and why?

Look, everyone has a different writing style, preference, method, and target audience. Maybe, Reddit is your backbone. Great, keep using Reddit, but like Google+, which was my backbone, social writing platforms come and go, so it’s a good idea to futz around with something new—in this case something old—just to see what works.

Anyway, right now, I’m just going to import a few articles on one single topic in order to keep everything homogeneous. I’ll see how it goes, and update everyone here with a follow up once I see some kind of trend.

At this time, I have deleted all of my previous Medium articles, and all I have are the few posts I've imported from elsewhere, so there isn't much else to say.

Thanks for reading, and be sure to drop by my Editing and Free Resources tab on my site in order to read more articles like this one. I also want to say thank you to everyone who has been tipping me on Vocal. You guys are keeping me around. Thank you very much. See you on the next page!

advice
Aaron Dennis
Read next: Why Denny's Is the Perfect Starter Job for a Cook
Aaron Dennis