by Annamarie Harris-Romero 10 months ago in humanity 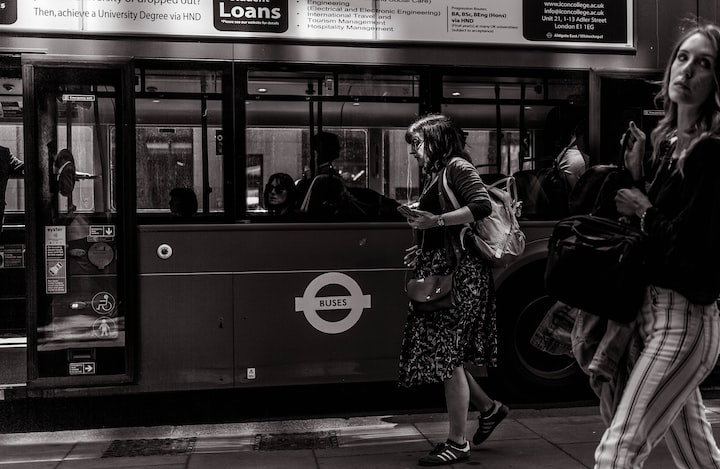 I used to think of thankfulness, as something we felt or experienced when things went the way we wanted them to. A feeling that washed over us when our lives progressed smoothly and easily. Up until this particular bus ride, I had never even considered being thankful for anything that did not fit in to my narrow scope of reasons to be thankful. As I have gotten older, I have learned that experiences both good and bad, can be opportunities that can teach us so much about the human spirit.

I was on a Phoenix city bus one dreary evening after finishing a long, hard day at work. I was already tired, cranky, and frustrated by having to stop at the market for food. I guess I could have skipped the store and choked down yet another package of instant noodle soup, but I just couldn’t stand the thought! As if that wasn’t enough, it was raining so I was soaked to the bone, the bus was late, and as I boarded the bus and lugged my heavy purchases through the crowded aisle, I realized much too late that I was on the wrong bus! The bus I had boarded would not reach the downtown station in time to make my connection. This would mean a very long trek on foot, while carrying my packages. I would be lucky if I made it in time to claim my bed at the homeless shelter that due to some other unfortunate life events, I was calling home at that time. "Thanks a lot!" I exclaimed, to no one in particular. I could not think of one reason to be thankful.

I fought my way to a seat near the rear of the bus by the exit and I glanced over at the young gentleman seated to my right. He appeared to be about seventeen or eighteen years of age and definitely seemed to be preoccupied. Perhaps he was having the same kind of day I was having? He had the look of a broken human. Depressed, dejected, and ready to give up. I knew that look oh too well. I had felt that way so many times myself.

I let my gaze wander from the young man, to the face of a young woman seated across the aisle from me. She looked stressed and a little frazzled. Over the course of the last hour, she had already been the victim of a plethora of dirty looks and several unkind comments regarding her lack of parental control. It was true, she was having a difficult time containing the three tiny little noisemakers. It isn’t easy when you have multiple children who are all toddlers. Her kids were clean and well cared for, and I commented on that. But at the end of the day, when everyone is tired and restless it’s not an easy task to keep them contained. As we approached her destination, I abandoned my packages long enough to help her round everyone up and get them into the stroller and then I help her off the bus. I took a little extra time, and left her with some words of encouragement. I told her that this too shall pass and I cautioned her to enjoy them while they are young. I know all too well how fast they grow. As a mother looking back, I have wished that I could turn back the clock and that they could be little again. That I could shield them from the world.

As I stepped back on the bus I expected the bus driver to lecture me for holding the bus up, or at the very least I was prepared for the other occupants of the bus to riddle me with nasty comments or looks. Instead, I was met with appreciative nods, kind looks and, an actual word of thanks from the driver. He said he would have liked to help but it was against company policy. I felt pretty good as I made my way back to my seat. I sat down, prepared to relax and enjoy the rest of my ride in comparative silence. As I lay back against my headrest, the rather glum young man next to me began to speak. He said, “That was pretty cool, what you did for that lady. Helping her with her kids and all.” I smiled, and told him that I remembered what it was like when my kids were little, and I knew firsthand how stressful a bus ride with little ones could be. I also, half-jokingly, told him that I understood why some animals eat their young. He laughed and for some reason, I felt compelled to tell him about how I wished that I could go back and be a better mom. I expressed how much it hurt me to know that I had disappointed my kids numerous times.

Soon, I was telling the young man, whose name was Sean, all about my life. I shared with him my regrets for ever having used drugs and going to prison and for losing so much time with my children and my grandchildren. I certainly told him much more than I would usually divulge to someone I had just met. I feared I had shared too much, and I would not have blamed him if he had quickly moved a few seats away from me or pretended that the next stop was his.

To my surprise he began revealing his own story of regret. He spoke of how he had previously been on the school track team, a solid B student,and was on the road to being accepted into college. He said he had gotten depressed, fell in with a bad crowd, started getting high, dropped out of school and had even tried to kill himself one week earlier. His parents had done some type of intervention and had placed him in a rehab center. It never dawned on me that he was playing hooky from that very facility.

Eventually, he came clean and told me that he had run away from the program, and that he did not intend to go back. He said after all the terrible mistakes he had made, and the embarrassment he had caused his parents he knew they would never be able to forgive him. He didn’t think they could even still love him. He figured they were sorry that they had even had him in the first place. I told him that was nonsense. I explained that from a parent’s point of view there is nothing that my daughters could do that would make me stop loving them. I may not always like or agree with what they do, but I will always love them and could never imagine a world in which they didn’t exist.

I could see a tear in the corner of his soulful brown eyes, he turned away and looked out the window. We both rode along in introspective silence. The bus driver brought us both back to reality as he bellowed, last stop of the night, downtown Phoenix station. I looked at the young man and said we better hurry or we are going to miss our stop. He smiled and said, “I missed my stop 45 min ago.” Then he picked up my packages, and asked if he could carry them home for me.

I was a little confused, and I asked him why he wanted to carry my groceries and why he hadn’t got off the bus at his scheduled stop? He told me, “Well, I didn’t get off because I was enjoying our conversation. I realized a lot of things while you were talking. I saw the love in your eyes as you talked about your daughters and I remember seeing that same look in my mom’s eyes when she talks about me.” He then said, “The reason I am carrying your groceries is because it’s the least I can do for someone who just saved my life.

“Saved your life?” I asked, in disbelief. “What are you talking about?”

Sean looked at me and with more tears in his eyes and as he reached into his pocket, he pulled out a cellophane-wrapped bindle which contained what I can only assume was a lethal dose of black tar heroin and a hypodermic needle. As I looked in to his eyes, I could see his pain was immense. Then, through the teardrops, he smiled and tossed the items in the storm drain below us.

“I got on the bus, the stop before you did,” Sean said, “ I had just scored the dope and I was planning on getting off a few stops after we started talking. I was planning on killing myself in one of the old warehouses just off of King Street.” “After you started telling me all about the S#iT! You had done and all the stuff you had been through, I thought, if this crazy lady can change, so can I!”

He smiled the most genuine smile you have ever seen. I don’t know if the rain had actually stopped or if the storm clouds had lifted but for that moment all I could feel was the sun.

I realized then how thankful I was…. Thankful for getting on the right bus after all!

Years ago, I was homeless, addicted, suffering from mental illness, and ready to die. Because of the miracle of second chances & the help of others, I survived. I share my stories of failure & triumph so that I may give others hope.