by Megan Wesby 2 months ago in advice 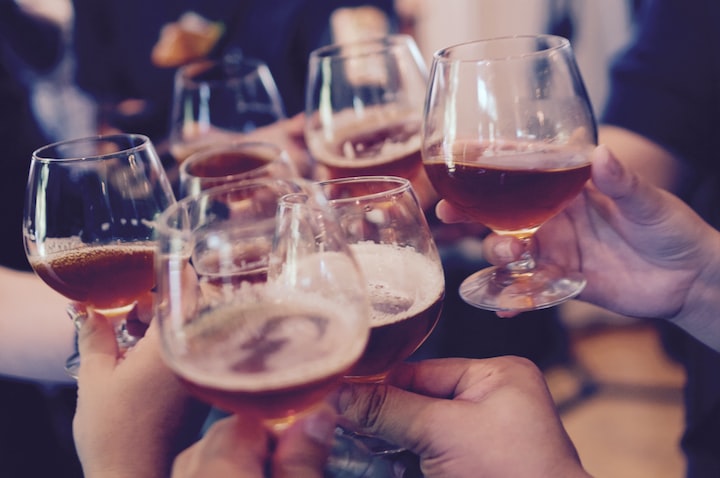 Photo by Yutacar on Unsplash

In an episode of Family Matters I recently watched, Eddie—the son of the family—comes home drunk after being warned the previous day about drinking by his father, Carl. Essentially, Carl threatened Eddie with eviction from the home if he drank again, since Eddie is only 19 and, thus, not of legal drinking age. I disagreed with this approach for a couple of reasons.

As someone who has never enjoyed drinking, of course it's easy for me to not drink. But, as a teen, I was curious about drinking just like every other teen and my parents gave me the same spiel about drinking that most parents give their teens. It consisted of two simple words: don't drink. There was no reason or rhyme except that it leads to a life of drunkenness and, ultimately, a downward spiral into nothingness. When I considered the facts, however, I found my parents to be wrong.

My first issue was that my father had never had a drink in his life. Someone who has never experienced the effects of drinking is not someone I'm prepared to take advice from because it seems biased and one-sided. How can you tell me not to do something that you've never done? His reasons were biblically based but still weren't good enough for me. I still wanted to try it just to see how it was; especially after reading that Jesus allegedly turned water into a wine at a wedding and they partied all night long.

The next thing was that I'd known plenty of people who drank beer, wine, and even champagne and are wealthy and living lavish lives. Even upscale restaurants serve wine with their dinner courses. These people are not homeless wyno's living on the street. They're some of the Elite's of our society. This piqued my curiosity. How is it that they're able to drink and live such a lavish life but I've been told that if I drink, I'll ruin my life? I began looking into it some more. I was determined to find a truth that resonated with me.

Of course, if your teen is under the legal drinking age, they shouldn't be drinking. But, as someone who has lived near a college campus with these teens, I know they're going to do it anyway. They're going to attend parties and they're going to drink all night. But if you instill in them the knowledge of ways to drink responsibly, their chances of not getting a hangover or blacking out while still having a great time are far better.

One thing I've learned is that I do not like the way drinking hard liquor feels to me. It makes my brain feel like it's swimming in a bowl of water and it's like I have no control over my own actions. As someone who is OCD, I cannot stomach that feeling. So, I do not drink hard liquor any longer. Once every few months or so, I may purchase a bottle of Sangria from a local Vineyard and it will take me at least a month just to finish it.

When I did drink, however, my favorite was a Vodka and cranberry, Screwdriver, Malibu Rum and Pineapple juice, or a Sex on the Beach. These would immediately give me that woozy feeling, though. After some trial and error, I realized I could ward off this feeling by doing two essential things:

1. Make sure I eat something hearty before I drink. This ensures that the alcohol is more evenly absorbed into my body than to just chuck it into an empty stomach (which can instantly cause feelings of nausea and ruin your night way sooner than you plan). Eating something at least an hour prior to drinking definitely helps the 'tipsy' feelings last longer without plunging you directly into pure drunkenness too quickly.

2. Have a glass of water nearby at all times. Alcohol can dehydrate you very fast. A hangover is your body's response to severe dehydration which is why drinking water and getting plenty of rest helps. You can prevent a hangover by already being sufficiently hydrated prior to drinking, consuming water in between drinking your alcoholic beverage, or having more ice in your glass than alcohol to balance your intake a little better.

I've never met anyone who enjoys the feeling of a hangover. So, these tips will be helpful so if you decide to drink illegally you can still have a good time and not only remember what took place when you wake up the following morning but be capable of functioning like a regular human being instead of a zombie who's hugging the toilet the next day.

By being a responsible drinker, you diminish the perceived risks associated with drinking and can kill a lot of the stigma associated with underage drinking like being a burden to your friends who aren't quite as drunk as you, inconveniencing your roommates by hogging the bathroom all night and the next day, and looking like a fool in front of everyone at the party. Not to mention the possible lecture you'll get from your parents or other authority figures in your life. You can avoid all that by being responsible if you decide to drink (even though it's against the law).

Now, bear in mind that I am not condoning underage drinking. The law is the law for a reason and we should all abide by it. But if there is going to be underage drinking (which we all know there has been and will continue to be), then we, as the ones who care about these teens, could at least arm them with the information they need to be responsible if they decide to drink so they don't become a statistic.

Most times, a lot of thought doesn't go into the preparation before a party where drinks will be available. So, if those of us who are older and more experienced can simply sit these teens down and explain the things they can do to make sure they can enjoy themselves at the party with minimal risks then we can help them to learn how to be responsible if they decide to drink and I think that's much more effective than threatening them or trying to scare them into not drinking at all. Responsible drinking also includes having a Designated Driver or using a Rideshare service instead of driving so as to decrease the risk of a DUI or collision and unnecessary loss of life.

It's not that we're condoning underage drinking. We just know these teens are drinking anyway. I've seen it with my own eyes when I, a 37 year old grown woman, lived in an apartment building near a college campus which was directly across the street from a frat house where they had parties nearly every weekend that got wild and out of hand. What we're doing is passing down what we've learned about being responsible if drinking should happen, which will be far more valuable than an unsubstantiated threat.

After all, you still have a drink from time to time don't you? Then why tell your teens not to drink? Of course, because it's the law. But if they're going to drink anyway, what can you do? Well, you learned to drink responsibly. Many of us have families and children now but still know how to have a couple of beers or a few glasses of wine in the evenings. We know how to go out and have a drink or two but still make it home safely. Why? Because we learned how to be responsible. I think that lesson is far more valuable than to be the hypocritical parent screaming at their teens not to drink at all, especially when the chances are very good that you were sneaking and having drinks before the age of 21 also.

The important thing here is to teach a valuable lesson your son or daughter can take with them in life and use forever. Telling them not to drink at all just makes them want to drink even more and that type of rebellious drinking, without any sense of responsibility, is what can be detrimental to them and their health. But if you sit them down and let them know you realize they may drink when they're away from home and you just want to make sure they're safe and responsible if they decide to do it because you love and care for their safety and well-being, you open the doorway for communication with your teen as well as an unshakeable trust. These are the things you want to foster with your teens, aren't they?

We may not be able to stop underage drinking but we can teach responsibility to those who do decide to drink while underage and this can be transformative in the best way. Who knows, you may end up with a teen who grows into an adult like me who tries the drink a couple of times and realizes it's just not for them all because you taught them responsibility and gave them the freedom to choose.

I had to do the research and have those experiences on my own, though, because my parents didn't know how to teach responsibility since one of them didn't drink at all and the other was too afraid to talk about her experiences and mistakes in life for fear that we would repeat them on her behalf. Because of that, I have learned for myself what approaches work and which don't so that I can teach my children how to make the best decisions for themselves even when I'm not around.

You don't have to be a perfect parent for your children to like you or want to talk to you or listen to you. You simply have to be human. Be real. If you scream at them and tell them what not to do without a logical reason or without considering what they want to do (and will do regardless), you'll cause them to put up a barrier and they'll simply do what they want when they're not around you and shut you out. Let them know you love them and care about their well-being. Have these "uncomfortable" talks with them because it could be the very thing that makes the difference and saves their lives.

The culmination of who I am can be summed up in one phrase—as someone very special to me put it—"a curated expression of love..."

See all posts by Megan Wesby →