Why It's Never Too Late To Change

You always have today. 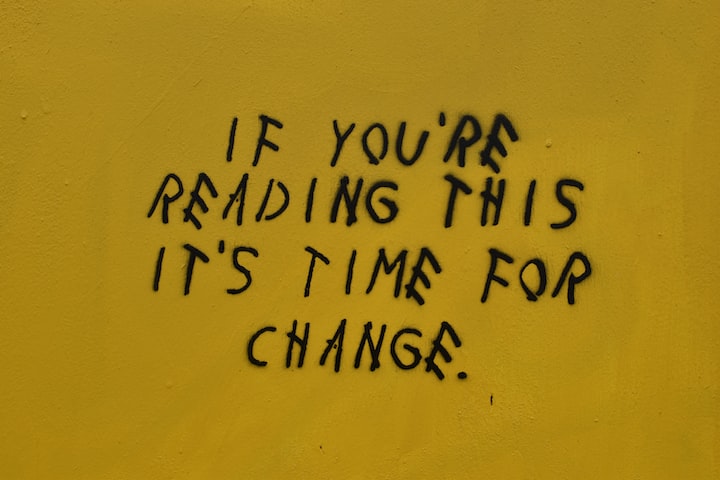 Photo by hay s on Unsplash

Early one foggy morning in 2008, I woke up and decided it was time for a change.

Grow, they did, because so many employees were willing to go above and beyond to make sure it happened.

By 2007, the hours I worked most days were those of two full-time employees. Mid-year, the hours increased, again. I worked, on average, for 20 hours per day five or six days a week for 15 weeks.

On that foggy morning in 2008, I walked into my boss's office and told him that if things didn't change immediately that day would be my last.

To my shame, it took me 15 weeks to reach that point. To his credit, he took immediate action.

Shortly thereafter, I started running, started eating healthy, and lost 35 unhealthy pounds. I also finished the basement of my home.

The build-up to the big change took 8 years. I allowed the company to take advantage of me; it's a problem I have: being a "yes man".

Twelve years passed and I found myself in the same situation with a different company. My yes-man syndrome had reared its head again. On top of the extremely long hours, I was also away from home for weeks at a time.

I gained back 30 unhealthy pounds. I was unhappy most of the time. I hated my job.

December came, and I gave notice to the company. I'd performed my duties so well that my boss was surprised when I told him I was leaving.

I recognize that the pattern in these related stories is one of me not saying no when I needed. My first experience should have been enough to teach me an important lesson about allowing my employer to take advantage of me.

But, I'm one of those people who is extremely confrontation-averse. I hate confrontation more than almost anything.

As a result, I've spent many of my 22 years in the workforce doing more than I'm paid to do for the companies that have employed me.

I'm still employed with the company I gave notice to, but I finally established some very clear ground rules about what I was and wasn't willing to do.

Work-for-pay is something relatable to a lot of us so it's easy to discuss, but let's move away from employment to talk about change in more general terms.

Some change occurs naturally. All of us get older each day. It's true that some people seem to age more "gracefully" than others, but that change is ultimately out of our control. Sooner or later, we will all stop being counted in the census.

Some changes are unnatural yet still out of our control. A negligent or drunk driver might cause an accident resulting in premature death for one or more people involved in the accident.

Still others are within our control. For those changes we can control, the first step toward change is having the desire to do so.

A complete library of books and blog posts has been written about change; about how willpower isn't enough to effect change in our lives. While that's not entirely true, it is true for many people.

Even when the level of discomfort involved in staying the same is excruciating, we often resist change. It's not a conscious resistance. Psychology Today says:

Change requires resisting well-established behavioral patterns, which means that you will be working against unconscious, automatic processes in the brain that are designed to make life easier. Resisting what is already a formed habit requires effort.

No, that's not a typo. The hype-word is metacognition: thinking about your thoughts. In this case, it's finding the desire to want to change. This desire usually comes about in one of three ways:

Whatever the source, you might recognize it as a need to change. Point of fact: you don't need to do anything. You just can't always escape the consequences if you don't do certain things.

That perceived need is desire at work. As it grows, your current state becomes undesirable enough that you begin to make plans to change. A lot of people get stuck in the planning stage and don't execute the change. (That's why New Year's resolutions often don't last beyond the end of January.)

Attempts at sweeping changes often fail because they're too hard - require too much effort - to make significant change in a short period of time.

Instead, nurture the desire to change by making almost imperceptible progress toward whatever your new, desired state is. Crash diets are fine if you're trying to lose 10 to 15 pounds before you go on a beach vacation, but realizing long-lasting change requires more sustained effort. Perhaps that looks like reducing the amount of carb-imbalanced foods by 10% every other week. Maybe it looks like getting up and walking for 5 minutes every couple of hours.

In less time than you think, the incremental steps become the new well-established behavioral patterns of your life. The 5-minute walk may have even become the 30-minute walk, and a daily practice that is sacrosanct.

As already mentioned, you may find yourself in circumstances that are truly outside of your control. For all other situations, however, it's never too late to change. . .if you want to. Once you've identified your reason(s) to change, make a plan of the tiny steps you'll take in the next week, month, and three months. If you can't visualize yourself where you hope to be in three months, make the steps even smaller. Then, make a calendar; something you can hang up in a place where you'll see it often. It's amazing how much resistance can be removed by simply giving yourself a visual reminder of what you hope to accomplish.

Each tiny step is part of a great adventure in becoming something more than what you were. As Wilferd Peterson puts it, the accompanying attitude "inspires dissatisfaction with the world [or ourselves] as it is; it arouses the desire to change and improve things."