When Your Husband’s a Pro at Pillow Talk

by Lindsay Rae Brown 21 days ago in marriage 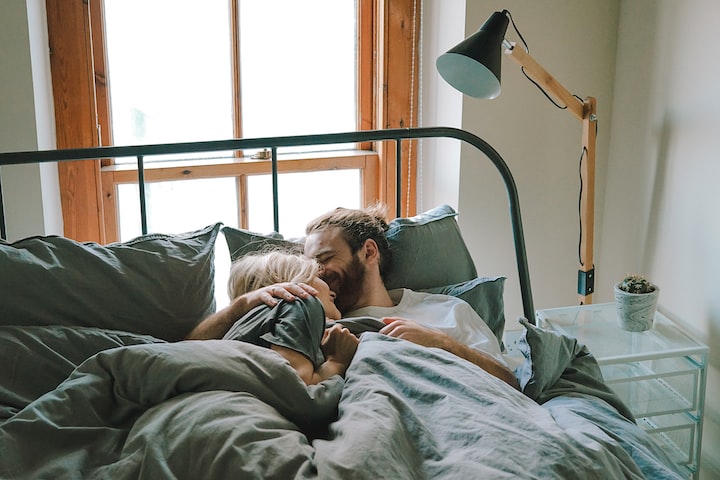 Sometimes I get absurdly mad at my husband, Jamie, for not being the sort of spouse I want him to be. I say that he needs to read my work more and support me endlessly in my writing endeavours. I obsess over the fact that I want him to show me more public displays of affection because everyone should know how much he loves me!

I say that we need to have more date nights and stop talking about work so much. And in the next breath, I get angry that he isn’t bragging about his wife’s fabulous writing job to all of his Facebook friends.

So as you can see, I am an absolute gem to live with.

Every once in a while, I slip out of my egotistical fever dream, and that’s when I go and lay in bed with the hubs and talk to his half-sleeping brain.

Jamie loves sleeping. He’s a rail conductor and works insane shift work. He gets called for service at 3 in the morning some days, rides rails for ten hours and then has to sleep in some grungy bunkhouse for an hour or two before getting called back to work and then does it all over again. So the comfort of his bed is a luxury, and sleeping is his happy place.

To his credit, he never gets upset when I crawl in beside him and gently kiss the tip of his nose to wake him from his slumber. Instead, he strokes my face, not unlike the way he caresses the top of our dog’s head and says, “Shhh, Lin, go to sleep.”

“I don’t like sleeping,” I reply. “I haven’t seen you in two days. Let’s talk and visit!” And because he is a good man, he struggles to wake himself up even though he is yearning for shuteye.

“Wait. What? Did you just say you don’t like sleeping?” He slurs at me this morning when I decide to embark on one of these husband-waking excursions.

“Yeah. I just don’t like to sleep. I have more important things to do,” I say. “Things like bugging you when you’re trying to sleep.”

“That is the most morbid thing I’ve ever heard come out of your mouth.” The disgust in his voice is evident as he fights to keep his bloodshot eyes open.

“Lin, Lin,” he mutters incoherently. This whole calling me Lin thing only started recently, and I don’t know how I feel about it. “Lin, I can hear your body crying out for help. It’s saying, ‘Jamie, please make her sleep! I’m so weary and exhausted. Five hours a night isn’t cutting it! Do whatever it takes — USE THE PILLOW!’ ”

“Yeah, it is,” he replies and enthusiastically drapes his leg over me, “but your Lin-fings are so sleepy!”

“Lindsay fingers. Duh. They’re exhausted. They need rest from the job of thunderously clicky-clacking that keyboard all day long!”

Jamie is now so invested in this narrative he has made up in the mirky depths of his sleepless mind that he begins getting real worked up over my overworked Lin-fings. He’s basically manic at this point.

“Bae,” he knows I hate it when he calls me Bae, so he corrects himself, “Lind-Bae, I only want what’s best for you and your body — your Lin-fings. Allow the sleep to overtake you. Lay your head down! Become one with the pillow. Forget about your phone and the computer and the keyboard. Sleep, sleeeeeeep, my wife. Sleep.”

Whether it’s his insane half-sleep speech or the fact that he knows me so well, and yes, my body and brain are fatigued from lack of sleep, I can’t help myself from laughing hysterically at his absurdity.

He starts stroking his fingers over my face again — trying to lull me into sleep. He is trying to hypnotize me.

But I’m smarter than that, and he knows it. It’s going to take the big psychological guns to get this lady into REM sleep.

So he says, “If you neglect your Lin-fings’ needs, then they’re going to fall off! Lind-bae, what if you lose your Lin-fings?” The imagery in his prophecy is concerning. But before I have time to reply, he continues, “Then, without your beloved Lin-fings, you will be left with nothing but hany-nubs, and then you’ll have to dictate all of your writing aloud.”

“What!? Think of the things you write about, woman!? Think of the children! Poor Lars and Soph would be scarred for life if having to listen to you read aloud your stories about weird sex stuff and your plethora of bodily ailments that you refuse to see a doctor about!”

“Of course it’s true! You know I’m always right. And that’s precisely why you must ignore your better judgement and relax your body and fall asleep next to me right now.”

Despite his now loud and brutish demands of me, I am laughing uncontrollably. He has this fantastic way of keeping a completely straight face through the entire show, and I wonder why he never went into comedy himself. I think this is why I love the guy so much. He is one of the funniest people I know and has absolutely no urge to try to profit from that humour. He’s just funny — end of sentence. Gawd, I wish I could be that humble.

After all of these years, after all of the struggles and hurt feelings and misunderstandings, we still can make each other laugh with a few absurd minutes of pillow talk.

I love that so much.

I wish I could tell you that I listened to my husband and allowed myself the sleep I really probably do need. However, that’s not true at all. After he had eventually tuckered himself out talking about my exhausted Lin-fings and my would-be hany-nubs, he fell back in a deep and unwakeable slumber. So I played with his squishy face fat for a while, contorting his facial expressions in a myriad of funny looks, and then I slipped out of his grasp and sat down on the couch to write this story.

I stretch my achy fingers, yawn a great gasping wail, and begin to write. Maybe one day I will learn how to listen to my husband’s sage advice, but that day is not today.

Sometimes I get absurdly mad at Jamie because I don’t think he knows me at all. But then, when I least expect it, he pulls me in for a bit of the best pillow talk in the world, shows me he knows me better than I thought, and most importantly, he makes me laugh.

Pillow talk is defined as an intimate conversation between two lovers in bed. And after the many ludicrous conversations I’ve had with Jamie while he is half asleep, laughing hysterically while cuddling close, I can’t think of anything more intimate.