by Jesse Bixby 9 months ago in humanity

When you sit back and pay attention, you'll see kindness amongst the chaos. 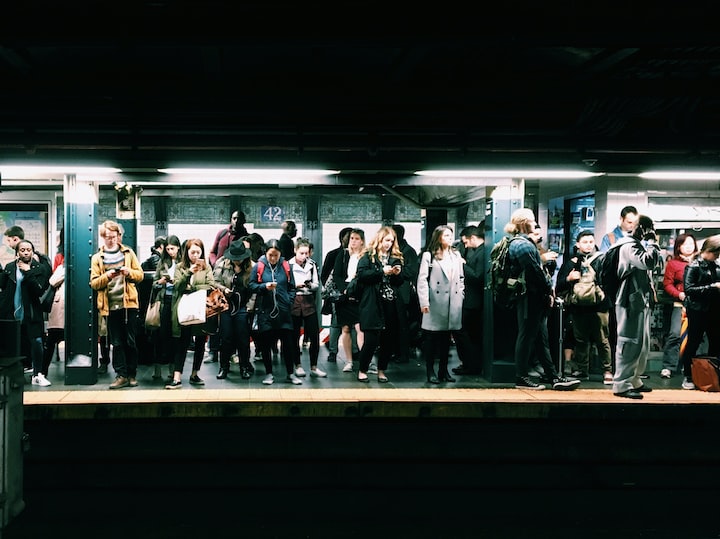 Photo by Eddi Aguirre on Unsplash

The bus to Marine Drive Station is never empty. I sit in the back of the bus and watch as people get on and people get off at each stop along the way. I take note of the fact that almost everyone is spending their bus ride scrolling on their phone. For those who choose to disconnect for a moment, you can witness some pretty incredible moments of kindness when you pay attention to the little things. By paying attention, we offer ourselves up to play a role in something bigger than ourselves, on some sort of a Universal stage.

I watch as an elderly man of Middle Eastern descent climbs aboard the bus, slowly making his way down the aisle of taken seats, his cane and legs wobbling and plastic bags dangling from his arms. A young girl, maybe aged eleven or twelve who also appears to be alone, jumps up out of her seat and offers the man a place to sit down. He politely declines as he insists he's getting off at the next stop; she offers to hold his bags. I smile as she stands with him and asks how his day is going.

Holding her pregnant belly, a young woman gets on the bus and I notice a boy who looks to be in high school move out of his seat so she can sit down. The woman appreciates the gesture and offers him to sit beside her, as there is enough room for the both of them. He sits, and in an attempt to make conversation, he asks if she knows the gender of her baby, to which she replies she's having a boy. Cool, he says, do you have a name picked out? She leans towards him to reply and the conversation turns inaudible as the bus drives by construction workers in the midst of building a skyscraper. They understand one another and continue to chat. The two wish each other good blessings before the boy parts the bus. I am lucky to witness such a connection between strangers.

I make it to Marine Drive Station and am on the train heading downtown. An elderly woman is watching a video on her iPad as I sit across from her. She is well-dressed with a sharp fashion sense, sporting purple hues and a wide-brimmed hat with a blue feather sticking out the side. A young man sits beside her, his head resting back and his eyes watching her screen. She notices he's watching and moves the iPad towards him so he can get a better view. They share a smile, and I smile at whatever they're watching for bringing them together.

I get off the train and a young girl in ripped jeans is whispering to her group of friends and looking my direction as I head towards the exit. She approaches me and asks me which stop she should get off if she wants to go to Chinatown. I tell her my best guess, but not to trust me because I just moved here a couple months ago. Really, she says with a suprised tone, I guess you just look like someone who knows the city.

I'm just an observer, I say. We smile.

These days it's too easy to become wrapped up in the bad news the media feeds us and get swept up in the chaos around the world. It's even easier to become entangled in the thoughts in your mind, every unconscious thought distracting us from what is currently in front of us. When you stop and look around at the world, you become increasingly aware of the kindness that is everywhere. People aren't as cruel or mean or judgemental as we're meant to believe. The fear that we cannot trust anybody these days was instilled in us from our parents, commercials, and news stories, but I find that this fear is outdated. In fact, it seems to me that most of us living in this world have a common goal: to live as peacefully and happily as we can.

2020 was a year of darkness and chaos, but 2021 shows that the light is coming, and it's getting brighter and warmer as more people wake up to their true purpose. What is our true purpose, you might ask? Being our authentic, most true version of ourselves. And in this version of ourselves can only live light -- there is no room for hatred in the purest version of ourselves. When we reach this level of self-love, we begin to glow, and that energy becomes contageous. This light has always been there; we've just been asleep to it.

You see, when you get real quiet and simply observe the world around you, you see this is true. Kindness is contageous. Good energy attracts more good energy. These small acts of kindness aren't so small. In fact, they create a ripple effect in the Universe, spreading on and on throughout the world. Something to think about the next time you step outside.

Freelance writer in Vancouver, BC.