The Friendship I Set On Fire

by Elliot Ames 4 days ago in breakups 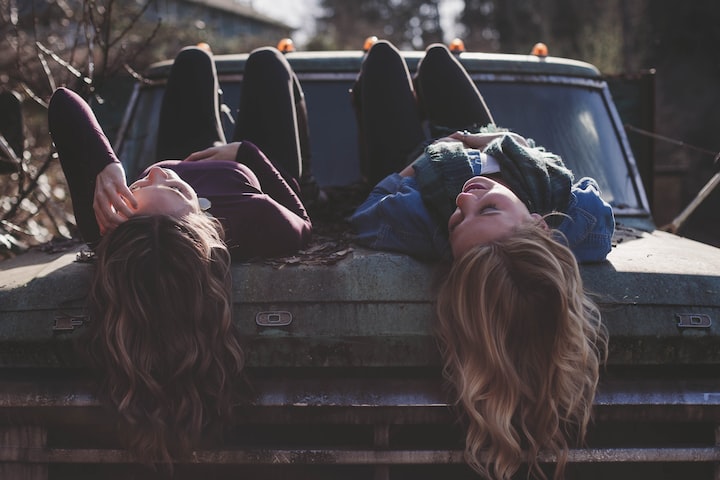 Photo by Greg Raines on Unsplash

The second I saw you on the internet: I was was hooked. You were beautiful in every sense of the word, and I wanted to know more.

So when you reached out to me on Tumblr and asked for rides to school? I jumped at the opportunity. I couldn't believe I was going to get to know more about the elusive Holly.

Our friendship progressed, and it progressed fast. The first moment I knew that I liked you was when we were at a Panic! At the Disco concert. Brendon Urie took his shirt off to sing his cover of Bohemian Rhapsody, and you grabbed my hand to lead me through the crowd. It was innocent, and it didn't mean much of anything, but for the first time in my whole life, I felt butterflies surge through my body. It's cliche, but cliches are cliches for a reason. Because holy shit, there were a lot of butterflies.

Our world spun wildly out of control after that concert. We'd spend at least three days a week sleeping over at the other's house. I'll never forget the time we drove to Walmart to buy googly eyes to put on every picture in my house for April Fool's, and my Dad getting so angry that I had to live at your house for a week. Or even the time we made another midnight run to Walmart: this time for cans of Monster and night vision goggles. Or how about that time I talked you into taking pictures with my new Polaroid at midnight in the middle of a shopping mall parking lot? And we saw a ton of cockroaches and screamed. God, we had so much fun. It was weird fun, but fun in the purest sense.

Then the jokes started creeping in from Holly.

"If gay marriage were legal, we'd totally be married."

It was fine. It was just a joke. Holly didn't mean those things otherwise, she'd act on them, right?

At some point between one of our friend-break ups, I had developed a raging alcohol and drug problem. We were at a Halloween party her sister's friend was throwing, and we looked damn cute too. She decided to be a femme Captain America, and I was so starved that I was able to cut the arm off of a little boy's Winter Soldier costume and safety pin it to my leather vest. We were a pair.

After smoking copious amounts of weed with her sister and her sister's friends (I think maybe I took some Klonopin too) and having downed a few beers, her one sister's friend decided he was going to "give me the talk" about how bad drug addiction is for you. At the same time, he was blazed out of his mind. I nodded politely until Holly finally came to my rescue.

I'll never forget this moment because it was, without a doubt, the most magical romantic moment of my life, between someone I assumed didn't share the same feelings. Holly sat down next to me on the cold metal bench, grasped my hand, laid her head on my shoulders, and stared up at the full moon for what felt like an eternity. It was one of those moments where you go, "I'll never forget this," and I never have.

If I fast forward a couple of weeks, and I'm not sure whether I was just sick of being her ride everywhere (she didn't have a car), or if I'm being more honest with myself, I was even more upset we weren't on the same page.

So I did what every self-serving drug-addled prick does, and I only thought about myself. I didn't care that Holly's birthday was coming up in a few days. I wanted a break. Then, a "break" meant a few sessions with some wine bottles and benzodiazepines. So I did what I always did when I felt sorry for myself. I drowned my feelings with booze and drugs.

I don't know how many days past since I announced our "break," but soon enough, Holly's birthday was approaching. Still filled with self-righteous anger, I thought, "no way am I going to that party." So I ate a few Klonopin and drank a lot of wine, and I got sloppy. When I mean sloppy, I mean, I texted her sister that very same day asking her if she could buy me weed. She said no, told me that I'm a drug addict, and continued to berate me about how fucked up it was that I wasn't at Holly's party. Here is what I'm humiliated about. Like most people, when I put booze and drugs into my body, I get reckless. I don't care who I hurt, or what the fallout will be; I want to say exactly what's on my mind—no matter who gets burned in the process.

I can't remember precisely what was said, but it was some variation of, "fuck you and your sister, I'm never talking to you again."

We shared the same therapist, and she returned a stack of books I had loaned her through the therapist. I knew that knowing Holly, she'd have written one final note. I was still so stuck in my self-righteous anger that I immediately threw the note in the trash and never found out what it said. Still, five years later, I wonder.

But god, Holly. I just want to say sorry. I'm sorry I felt resentful that you needed my help. I'm sorry I imagined romantic moments where there weren't any. But above all, I'm just so sorry I chose drugs over you.

If I could go back in time and slap some sense into myself, I would.

Alcoholism and drug abuse: what do I have to show for it?

The friendship I miss losing the most, though, Holly, is yours.

See all posts by Elliot Ames →