The Agony of the Innocent Refugees

by Swati Suman 8 months ago in humanity

When immoral dictatorship makes a mockery of the lives. 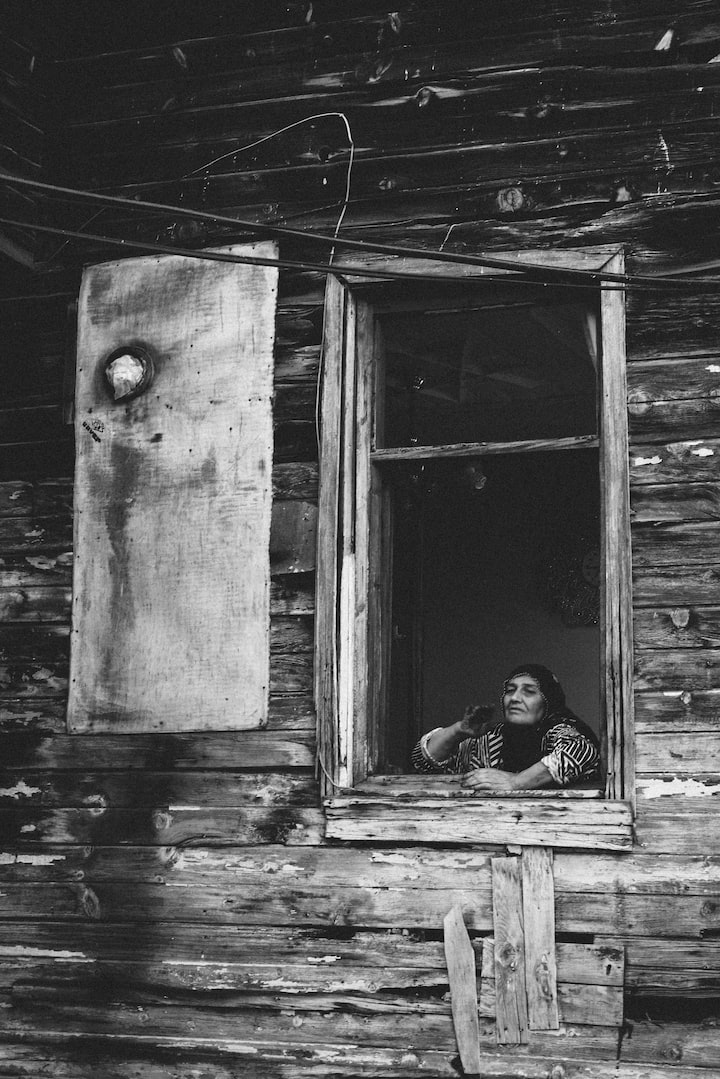 Photo by Rostyslav Savchyn on Unsplash

At the heart of the countryside, a poverty-stricken house stood out. It remained trimmed with thatched roofs in dilapidated style. The crosser by gazed at the house straight-faced. At the core of the landscape, affluent homes draped conveniently exist, but the poverty-stricken house remained the only cornered house in the market of good houses. It was peculiarly silent.

The human characters who lived in the poverty-stricken house: a mother that cuddled her newborn baby, her unemployed husband, an old grandma, perhaps might be the man's mother, and Naomi Anna, the couple's daughter. A sweet little 15-year-old, Naomi was hardworking and a lively girl who always grinned. By the outward perception, she was a happy-go-lucky girl.

The family loved, played, tried to form closed friendships, fought a little, and competed to live through their survival. There was nothing so unique, yet the family seemed different. Seldom did any of the members stepped out of the house. They just peeked outside from their broken window panes. Their house carried a black painted touch. Surprisingly, the family also always wore black clothing.

The native people entered the family's doorway out of curiosity. But nobody answered their call or gave a hint about their existence. There were also rumors in regards to the appearance of the house. Some named the house - the mystery, the secret undisclosed, few dubbed it as the black magic citadel, and to many, the house was merely inexistent. To them, it was just one shunted and a dark house.

As part of an NGO program that concentrated on upgrading the poverty-stricken areas, I happened to visit that place in the countryside. The visit to that area was two summers back. Until then, the mystery or black house or whatever you name became the talk of that non-urban area. The stories about the house's behavior spread like wildfire.

On reaching the place, our group rescued people burdened with poverty. After serving many areas, finally, the call was to address the mystery house. If I could remember, it was the time when the evening walked to the night. The ambiance enveloped the shades of a kohled sky. But this did not refrain us or deterred our helping spirit. As soon as we knocked at the mystery house's door, we remained addressed by a child's loud cry.

I could hear the hush-hush sound inside the house. Our team also sensed the weirdness of the house. Time passed. But nobody unlocked the door. We knocked once again. This time, fortunately, little Naomi opened the door. Dressed in black salwar-kameez, Naomi's hands carried a - Small Black Note-Book.

Naomi grinned. The other members seemed unwelcoming. Inside the house, the family hardly had rooms. There was only one master room used for all-purposes - cooking, cleaning, and sleeping. My eyes turned to the small baby in the house, and thoughts slightly hinted at where the noise came from. The baby was a boy whose smile was followed by the dimples, and he wore a black full-sleeve shirt. He glanced at us with curiosity.

We introduced ourselves to the family. Highlighting our NGO's purpose, we asked the family about the problems faced. About how we can help them to provide with a better living. Being friendly in our approach, our team made sure that the family felt comfortable by our presence and remained relaxed. After all, our main motto was - helping hands!

But no matter how much effort we put into making them calm, the family always had linen of tension crisscrossing their faces. The words from their mouth ran dry. Every member looked at each other poker-faced. Looking at her mother, Naomi, in a broken tray, brought tea for us that left us to feel quite gracious. But the tea-cups were also drenched in black. The vibe of the house made me feel suspicious. And unusual.

While the other family members talked with our team, I asked Naomi about the small black notebook. She was welcoming in her answer. Walking to the small-height stool, placed in the corner of the house, the little girl picked up the notebook placed on the table, brought the notebook, and handed it over to me. Maybe from here, our friendship built. Perhaps, might be she started to trust me.

The black notebook dressed with a black cover had a thread tied to its front that gave it the bow's look. Unlike the house filled with dust granules, the small book was relatively clean. Polished. And looked familiar like our regular books. Naomi was happy when she shared the book with me. On opening it, I found that the book was appealing in its existence. The first page wrote - Broken Dreams.

When I unfolded the pages ahead, I noticed that the book had nothing written. There were further no words documented. Somewhere the middle pages had crossed over lines, few flowers remained incompletely diagramed, and other pages were plain-white. The black notebook was nothing extraordinary except for the fact that the words - Broken Dreams - ringed loudly to the core of my heart.

My conversations with Naomi continued. It was fun-filled. On the other hand, our NGO team conversed with the other members regarding their whereabouts, problems, and concerns. The family that initially felt newfangled to us abruptly felt like sharing a personal bond.

It was the moment of truth. Slowly the reality got unsealed. During our conversations, we discovered that the family was never a family from before. Instead, it was a strange union of various members who belonged to a related tribe. This rural tribe had a culture of strict practice where they worshipped things that traversed in black. Black was the theme of the tribe. Right from their attire to the houses of the community dwellings to books, everything vibed a shade of black. And anyone disobeying or attacking the tribe's rules and regulations remained subjected to severe punishments. Even was put to death by burning alive or stone pelted.

The unified family was from a different country to that of the countryside. But they actually were like different pebbles of the same group. The couple was pairs in real however the small child was an orphan. The grandma, the seniormost member of the house, was a woman who left the tribe because of immoral rules, and Naomi was a young school-going girl with her broken dreams. Together they traveled as a family. They fled away from their previous place when a serious battle in their tribe broke out. Finally, they found shelter at the heart of the countryside, which was unknown to them.

As our conversations continued, the reason for the conflict got unfolded. It was the mysterious inheritance of a large sum. One of the members of their tribe went for digging grounds in the jungles to build a cave for shelter. On continuous tilling of the gravelly soil, the ground beneath sprang up with the hefty sum of $20 000. It was a moment of rejoicing for that particular tribe person who already experienced the impoverished state.

The irony. Someone from the tribe informed the lucky draw of the jungle to the head of the tribe. That person who went for digging grounds got caught. He remained deliberately asked to hand over the sum to the head. However, the person wrestled. Objected. And denied telling where and with whom the money was. As a result, heated arguments were born. And out of nowhere, a massive fight broke out to discover the hefty sum.

The money fuelled chaos. Even innocent people were targeted and attacked for the money. To save their individual lives, the people tethered everywhere. A continuous hunt got launched to discover the massive sum. When the large sum still remained unfound, the houses of the people were put on fire. Some demolished. The tribe resorted to animalistic behaviors that lacked mercy. The cruel head of the tribe converted the land into swathes of immoral killings. The sight depicted the nuance of the materialistic world where humanity was in its worst condition.

The refugees. "We are refugees," said Naomi in her angelic voice. Drinking a glass of water, Naomi further cited, "Our current house painted in black is unknown to us, except that we can at least hide our identity here." But why is there a need to hide? I questioned. Naomi replied, "Our rural tribe is in search of every member who fled away because of the harsh conditions prevailing there. We are also a close acquaintance of the person who found the large sum. And if the head of the tribe finds us, we are going to be killed over the money issue." Refugees are at the hitting end from both sides, said the old grandma from the family. And the money is the evil king, whispered the man of the family.

After questionnaires and finding the reason behind their isolation, our NGO instilled hope regarding their survival. They had their concerns which we understood. Taking them out from the poor and poverty- nourished area, our team rehabilitated the refugees in a standard place that supported good living conditions and also ensured the safety of the people.

Rewind the past; those people were the refugees who shared a strong bond like that of a family despite no blood relations. And the caress effort of our NGO team in listening to their problems helped them release their fear. The refugee's problems were switched with a radiant smile.

The two summers have passed. When I remember those times, the small black notebook still gets my attention and the words - broken dreams - still pinch aloud.

Writing to share and evolve. Subject Inclination: Philosophy, Science, and Humanities. Compassion above All.

Receive stories by Swati Suman in your feed
Swati Suman
Read next: My Friend Died