by Jennifer Smith 3 months ago in friendship
Report Story

The journey to healing my guts 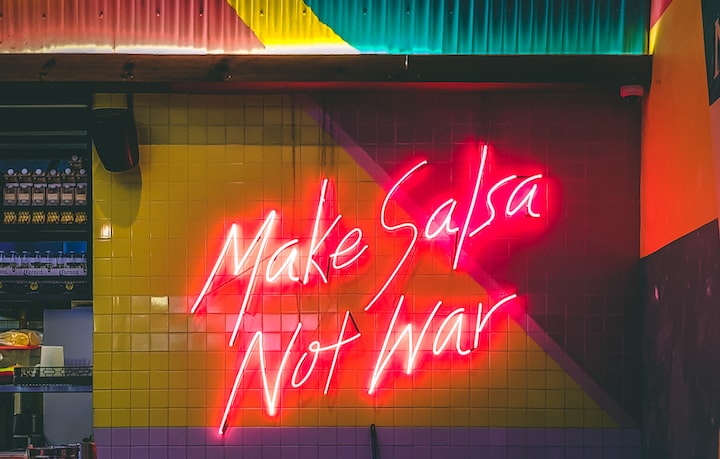 Photo by Victor on Unsplash

There was crying. No yelling. Just silence — nearly a year's worth of it.

That was the last time I voluntarily spoke to my father. Not the last chance I had to eat the nachos — praise.

Some might think this to be a sad story. A father-daughter relationship that appeared close turned sour in 180 seconds after picking up dollar tacos.

“You think you’re some goddam Christian, better than everyone else. Why don’t you get a job and see if there’s anything you’re good at.”

I was not a Christian — damned or otherwise.

I was 19, a straight-A student, and in my second year of college. I worked hard and learned fast. No, I did not have a job. I had never tried to find one, nor was I ever asked to get one. It is not a stretch of the imagination to assume I could do better than packing the wrong combination of bean burritos and crunchy tacos.

Yes, the catalyst to the fire that burned what was left of our family dynamic was pointing out that I told him to check the bag before we had left the restaurant. I promise you, my I told ya so was said in the most jocular of ways. (Vitriol would come later, along with the cynicism. Both came as a result of this gut-checking year.) I sat in stunned silence, a full plate of olives staring back at me. He sat down opposite my sister, who had tears streaming down her cheeks. Oblivious to the harm of his words, he yelled — there was one yell —with as much spite as his previous words, why are you crying?!

That is when they went flying.

I was a go-with-the-flow type of kid. That is what it felt like, at least. I believe it now to have been suppressed damage from a family dynamic that was typical in its atypical. I did not have the guts to deal with it, question it or build a different identity separate from it. I never caused trouble. Never asked for anything I did not believe my parents could afford — tangible or not.

There were things I wanted desperately. This included exercising my scholastic abilities to go further than our local state or community colleges. I did not know what to do with those desires and unmet needs. It is clear to me now, they would not have known what to do with all of that either.

So I just kind of existed. It was not a terrible existence, just a very passive journey that made adulthood a tender time for learning. It made me vulnerable to the lure of comfort and familiarity and the people that promised those things.

I chose to live with my father when my parents divorced out of sheer convenience to school. In honesty, I would have never wanted to share weekends with him if I felt I had that as an option. I still had the memories of an earlier attempt at the separation between my parents. My dad made time with him feel like an emotional weight too heavy for a young child to carry.

The year leading up to the flight of the nachos had been a doozy. It had tested my every limit — physical, emotional, mental, and the smallest dabble of spiritual. I had made it through a season of life that started uncomfortably. I struggled with direction and goals; what did I want, where did I want to be. All that charming anxiety of early adulthood.

A Fall of loathing met Spring with a tinge of self-confidence. I was just hitting my stride when he struck.

I sat in the middle of the floor, wrapped in the darkness of life until the light of unknown origin broke through. There could have been a street light, or maybe it was a God I am still uncertain of. But I know that telling this story to my super Christian coach-turned mentor was mistake numero uno on this journey of self-discovery.

I first consulted the Bible. No, that is an understatement. I read it, all of it, in that first weekend. It was two and a half straight days, on my floor trying to answer all the questions. I read all the Testaments, covered all the Numbers. Saying no thank you to breakfast then another dinner. The buffer in the form of my sister would be gone until every other Friday.

I was only after the answer to the one question: Purpose. What was mine, and had I missed any signs that would have directed me to a better one. Was this the sign? Are signs real? Can someone just tell me what my purpose is — is that how God works?

Drive-thru hope was what I was craving. It was not how God worked, at least for me anyway, but that is how He was offered to me.

This feels like a good time to tell you that I am not Christian or any other type of -ish or -ist. But this journey was one I had to go on. It opened my eyes to the motivations of people. It sifted out the disappointments from the questions that do not deserve answers unless you first do the work.

This was part of that work.

My former varsity basketball coach was what many called a Super Christian. No cape, just the same threadbare dress shirts he wore in college. He was someone whose entire persona revolved around his religious beliefs. We were at a public school, but he was brazen in the adaption of the Bible to fit his lessons. Also acted without shame when he pointed out to me at the end of my senior year that all my closest friends happened to be Christian.

Maybe I just liked good people? I did like good people. My people were quiet in their energy but loud in their friendship — still are. But they also did not broadcast their religious beliefs, especially in the way he did. I also like to believe there was something innately good and wholesome in me that attracted these people. Ultimately, I was not seeking them out.

However, I felt like I was being sought out. It will be tempting to point out that my former coach was a he, first of all, and only 10 years older than I. Again, I would point out the Super Christian thing, and there was no attraction. Zero. Bleh. On my part, at least. That part is going to be important later. I will tell you more about how we ended up in a brother-sister relationship rather than coach-player. It was a friendship I was proud to have formed. Even given its ending, and maybe because of it, I am still incredibly proud of who I was and refused to be within its confines.

(I used to think I had a fairly mundane life, then I started telling my stories. As one friend put it, I have an interesting peripheral life. Thanks?)

What sticks out to me is how there was no attempt to try and convince me to mend the relationship with my father. He knew my father, at least knew he was a doting one that was at all his daughter’s games. I had never given any reason to believe this behavior was normal. It did not matter at that moment. As a charismatic, evangelical Christian, that must have been the thing all holy conversion dreams are made of — pain, longing, a whole bunch of whys — an opening.

My questions were not easy ones. The Bible could not answer my questions about the Bible, and neither could my self-appointed Brother-in-Christ. I imagine he had been dying to sign off like that for at least a year. I am pretty sure this guy that was stuck in his 80s glory days signed up for email just to be able to use that moniker with me.

My first question seemed as naïve as you would expect, but not as earth-shattering profound as it appeared to be: Conscience. God, or nah? Do you hear him — when people say ‘God led’ them — is that God through what we know as our conscience?

Oh yea, this was going to be no easy task convincing me fast food would nourish my soul.

Originally published in Motivate the Mind, a Medium publication, with minor edits.

It was a freeing moment to hit the publish button.

Religion, family, friendships...all complicated by the very nature of our inherent differences. We kid ourselves into thinking they should be easy and natural. Disappointments and heartbreak happen. All those things are part of growing up. It sucked, for lack of a more eloquent word, to have so much pain during a natural time of growth. Looking back at that period of my life, I realized what hurt the most was thinking that experiences like those were not the norm.

My sincerest desire for writing communities is that we are given more access to the stories of people we never knew existed. We have more opportunities to discover that there is no shared normalcy to growing into ourselves.

More stories from Jennifer Smith and writers in Humans and other communities.