Pay It Forward, Book 5: The Sage

by Jayna about a month ago in literature

Wisdom in a black notebook. 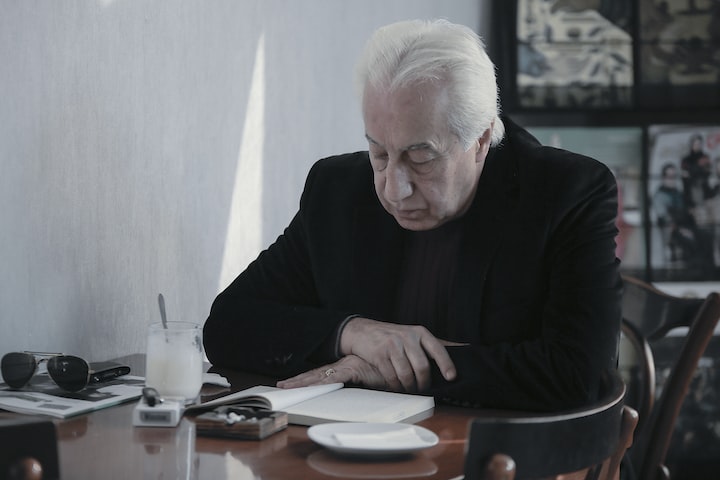 Photo by Benyamin Bohlouli on Unsplash

My life ended over 40 years ago but I didn’t die. New York City was different then, grittier and more dangerous. Mobsters ruled the streets so I kept to myself.

I got a side job making deliveries in a car that ran on fumes. It didn’t pay well, but I needed to save money. My wife and I were having a baby.

One day, while out on a delivery, a man stumbled into the road. He collapsed and I ran out of my car to check on him. He had been shot. I took off my shirt and pressed it against him. I ushered him into the back seat of my car and sped to the hospital.

Max’s was a known gangster hangout and I always stayed as far away as possible from that life. But a man was dying so I called to relay the message.

I never found out who the man I saved was but he must have been important. A package was delivered to Maria, my wife. It was addressed to me and inside was $20,000.

It was a token of gratitude, I was sure. The timing couldn’t have been a coincidence.

“We can buy a stroller now. Maybe a crib.”

“Exactly. We can’t return it.”

Maria and I never fought. It must have been the first fight we had. She was right, though. To whom would we return the money? I stuffed the package in a hiding spot behind our bed.

The next morning, I walked Maria to the bodega down the street. Her belly was getting bigger and she had trouble climbing the stairs with the groceries.

I had bent down to pick up a lucky penny so I didn’t see it coming. A car screeched down the street and we were showered with bullets. I saw my wife fall in front of me before I knew what happened. I covered her with my body. Within an hour, I was a childless widow.

After that day, I felt no joy. I lived my life internally, remembering Maria and imagining what my life could have been. I recorded every memory I had of Maria in numerous black notebooks. Those notebooks became become my world. My substitute life.

On the day of Maria's funeral, I found the money behind the bed. I had forgotten about it. There was no need to look for it. Maria's hospital and funeral bills were mysteriously taken care of by an unknown benefactor. It was probably the same people that sent me the original $20,000.

I didn't know what to do with all that money. On impulse, I threw the money into get rich quick scheme and forgot about it. It didn't matter. I could lose it all because it wouldn't bring Maria back.

I wrote in my notebook every day. I was consumed by my grief, numb to any other feeling. On the first anniversary of Maria's death, I looked back at all of the entries that I had made into my notebooks. There was so much anguish in those pages. Maria loved life. I didn't think that she would like that I was keeping her memory alive by feeding my pain so I decided to change.

I decided to look at every day the way that she did, as a blessing. Every year on her birthday, I look over the entries in my notebooks. I think she would be proud to see that I became more like her as time went on. Dum spiro spero. While I breathe, I hope.

I was grateful for life, to be living, but I didn't have anyone to truly care about. Not like Maria. But that changed in the latter part of my life. I like to think that Maria put me in the path of four extraordinary young people. My friends – Rebecca, Mateo, Alex, and Chloe.

They taught me a lot about life and I hope that I taught them something too. I used to tell them that it was important to write things down to see how far they've come, like I did after Maria died. My notebooks were so important to me that they were the only things that I would make sure to take with me wherever I went. But I can't take them now.

For this reason, as part of my last will and testament, I, Stanislaw Nowak, bequeath my notebooks to my friends, Rebecca, Mateo, Alex, and Chloe.

The lawyer stopped the recording and turned to the four people sitting across from him. Rebecca wiped tears away from here eyes. Mateo sat as still as stone. Chloe turned her head into the crook of Alex's neck while he comforted her.

"Stanislaw – excuse me, Stanley – told me a little about all of you," said the lawyer. "Rebecca is a novelist. Mateo is a music producer. Alex is a painter and Chloe works in film. If you are the friends you keep, it would explain why Stanley was such an interesting man."

The lawyer motioned toward the stacks of black notebooks on the conference table and then handed each person a specific notebook. "Stanley's written instructions said that he will leave it up to the four of you to decide which notebooks you want. However, he had specific designations for four notebooks."

"Do you know why he decided to give these specific notebooks to a particular person?" asked Rebecca.

The lawyer reviewed his notes. "These notebooks contain the respective entries he made on the days that he met you."

The four flipped through the pages, skimming through Stanley's bold handwriting.

"Oh, here it is," said Chloe. "I met a remarkable woman – Chloe – today but she will struggle for a while. Alex asked that I speak to her. Her recent diagnosis of rheumatoid arthritis will make her career as a violinist very difficult. She and Alex were dating a little while back. She ended things abruptly but he didn't know why. I left her my information. I can't help her if she doesn't want it so I hope she calls me soon."

Rebecca looked at Chloe's hands. "Are you still a violinist?"

"No. I compose film soundtracks now. Sometimes I'm a guest conductor with an orchestra but that's rare." Chloe closed her notebook. "What does your entry say, Rebecca?"

Rebecca opened her notebook. "Oh to be young and petulant again! Rebecca, a teenager who recently moved in the neighborhood, is sitting across from me as I write this. She's been dealt a bad hand. Her father apparently got involved in some shady business and now she and her mother are paying the price. She's spirited, though. If she can get over her anger, she'll be okay."

"I did. With Stanley's help. What does your entry say, Mateo?"

"Actually, there are two entries." Mateo opened the cover of the notebook. "Rebecca came to me today, asking me to look at a few pieces of paper with poetry written on them. Quite good. She told me that they fell out of the pocket of a young man she sat next to at a concert. Rebecca felt that he needed an opportunity to explore his gift. I told her that I would call my friend who owns a recording studio to see if he has a job opening since poetry and songwriting are similar."

"It's a good thing you told me who your brother was. Otherwise, I'd never have found you," said Rebecca. "What does the second entry say?"

"It's from about month later." Mateo flipped through the pages. "I got a call from Mateo. He asked to meet to thank me for helping him get the job at the studio. After we met, I called Simeon, the owner of the recording studio, to ask if had seen any of Mateo's poems. He hadn't. I told Simeon to try and get Mateo to record some of them, just for fun."

"So Stanley was pulling strings in the background to get your lyrics heard. And it eventually got you in front of that big-time producer."

"Appears so," said Mateo. "It's also not the only time that Stanley has pulled strings."

"I know." Alex opened his notebook and read. "I met Alex today. Very dynamic artist. When Mateo brought me a painting that Alex painted a year ago, I knew that Alex had something special. I wanted to buy it, but it was better for Alex's career if the painting had wider exposure. I knew my auction house contact would be interested in the painting."

The lawyer, who had been listening, finally spoke. "When I read Stanley's instructions, I thought you would all be disappointed with Stanley's bequests. Honestly, this is more interesting than the jewelry and personal items that I normally have to distribute. Would you like to go through the rest of the notebooks?"

The four each grabbed another notebook from the stacks. It was going to take a long time to get through it all.

Chloe held up one of the notebooks. "Mateo, I think you will want this one. You took Stanley to a Kendrick Lamar concert?"

Mateo laughed. "Yeah, I did. Kendrick had just won the Pulitzer. Stanley was always open minded about lyrics. I think he enjoyed himself."

Alex read the entry in the notebook before passing it to Mateo. "He did. You should definitely keep this notebook."

Hours passed as the four read.

"Is it okay if we keep this notebook?" Alex asked the group. "Stanley wrote about going to the international art fair in Miami. I was showing there. I was so nervous. Mateo, you and Stanley were with me, remember?"

"That's right. The airline lost Stanley's luggage and he had to borrow some of your clothes." Mateo hooted. "He had these people around him all night because they thought he was some über-rich art dealer."

Chloe took the book out of Alex's hands and read on. "That sneaky bugger. I had told him that I was going to be in Miami at the same time. I was a guest conductor for the symphony. He said that he had an extra ticket to the art festival and he thought that I would want to go."

Alex kissed her forehead. "He brought us back together."

The four read on.

Mateo tapped Rebecca on the shoulder. "You should have this one."

Rebecca took the notebook and read the entry. "Rebecca graduated from NYU today. She was so proud because she made it on her own. She has so much spirit. She reminds me of Maria and the daughter I never got to meet."

That was the last notebook. The attorney's staff brought boxes to pack away the notebooks.

"There is one more thing," said the lawyer. "That get rich quick scheme that Stanley invested his money in was the stock market. A couple years ago, he sold the stocks and put the proceeds into the bank account, which is to be split four ways among you. I'll need for each of you to sign for a cashier's check in the amount of $115,000."

Rebecca, Mateo, Alex, and Chloe looked at each other and shook their heads. Stanley was always full of surprises.

Thank you for reading. If you enjoyed this story, please consider giving it a heart.

Pay it Forward is a 5-story series of free-standing stories about what happens when a person is faced with a blank page: