by Kitty Fox 6 months ago in humanity
Report Story

Who I Am and Why I Care 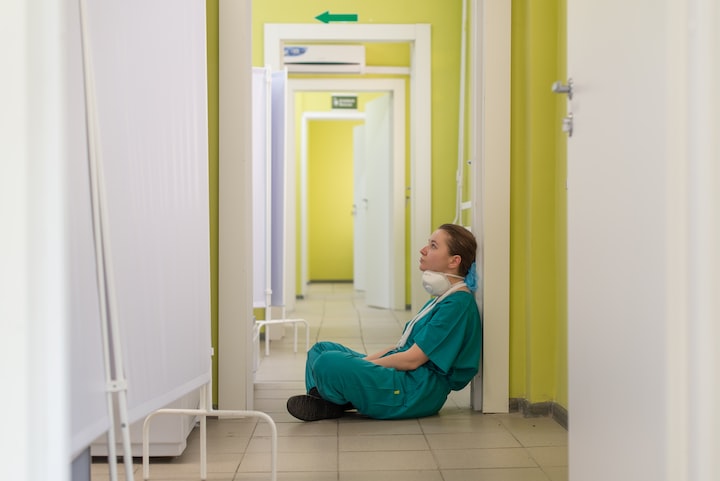 Photo by Vladimir Fedotov on Unsplash

Hi. My name's Kitty. My full name is Katlynn, pronounced "Kat-lynn", although most of the residents at the facilities I work in either cannot hear or understand me when I answer the simple question, "What's your name?" So many of them, and now most of the nurses, so that I don't become confused with Katelyn or Kaitlynn, call me Kat.

I have always had a soft heart and strong care for people and animals, ever since I was a little girl. I suppose animals held my heart before most people did because I never really got along with kids my age who picked on me for preferring to read books about animals and animal medicine than run around andfighti play sports with them. I spent most of my youth alone, studying things that interested me or holding intelligent conversations with people usually at least twice my age.

I think it was somewhere in middle school when I realized that in order to become a veterinarian, or any sort of doctor, there would be a ridiculous amount of math, a subject that I wasn't particularly good at, required in order to achieve my goals. At this point, while I still definitely had the care in my heart, I decided that I should probably try to pursue more realistic goals for my life, I just hadn't quite figured out what those were yet.

At some point, I decided I wanted to be an Airborne Ranger. How my life goals had changed from physician to warrior, I'm still not exactly sure, but I was pretty darn set on my ideas of jumping out of airplanes and fighting for our country. I was informed that women could not be Airborne Rangers, so without missing a beat, I simply said, "Then I'm going to be a God-D*mned Marine."

When I was 15, I was heading to a Christmas party with my aunt when we slid off the road and wrapped her car around a tree. We both walked away, but the accident left me with a hemorage in my lower abdomen, which healed, a back injury, which was probably the starting cause of my sciatica and herniated discs, and still to this day my left leg is just a little longer than the right one because of how my hips were twisted when the car spun in a circle and crashed head on into that old oak tree.

We were lucky to walk away. My aunt's car was totaled. I spent weeks in physical therapy and going to a chiropractor twice a week. I felt from that point that my dreams of joining the military were pretty much dead. I had PTSD from the accident and at the worst times would have full-sensory (sight, sound, smell, etc.) hallucinations of being in a car crash. I couldn't drive, I really couldn't even ride in cars in most situations without having panic attacks.

I was sure the military wouldn't take me because of my damaged physical and mental condition. I had these horrible vivid flashbacks and my left ankle seized up and I almost fell to the ground every time I tried to run. I was certain that the ability to run was a requirement of every branch of the military, but this all gave me time to step back and think maybe there was something better I could do with my life.

My thoughts returned to what my aspirations had been before I so strongly felt that I wanted to be a soldier. Instead, I wanted to be a healer, a helper, something I had always been very good at being. My plan was to graduate high school and move with my friends to Seattle, live there for a year and then attend Evergreen College in Olympia, with my end goal being to become a Doctor of Natuorpathic Medicine, what I kinda felt was a fancy way of saying herbalist.

Considering that Evergreen allows you to design your own major and only required basic core classes, I knew that I would not be required to take any high level math courses and this goal was achievable. This plan for my life would not end up working out either.

Because of things that happened during my sophomore year of high school and my mom's job ending, I dropped out of high school and we left Arkansas to go live with my grandma, who was living alone in a big house in a very rural area of southwest Oklahoma. It was very different from the enlightened "hippy" community of Fayetteville and my dreams seemed to disappear with the trees we left behind in Arkansas. I did know that I did not want to spend the next 2.5 years going to class with these farm kids who would probably judge and misunderstand me and my goals for life, only to graduate later than I should have anyway.

My goals became more immediate. I was going to get my GED and go to college. I did get an application packet from Evergreen and a few other schools that I thought were pretty cool. Ultimately it was decided that the schools I wanted to attend were too far away and too expensive for my family. So I enrolled in a cheaper school closer to home and somehow wound up majoring in communications even though I had always had some trouble talking to people and knew I would never be good at public speaking.

College was an adventure that led to many misadventures and then on to me deciding just to travel the country after my family ran out of money to pair with my financial aid and we couldn't afford for me to finish school. I will be sharing more stories about this part of my life later.

I was living in Seattle when I got a call that my grandmother was sick and I needed to come home. I spent a whole summer and fall back in rural Oklahoma caring for my grandma. Life was on hold. I didn't get out much and basically just stayed at the house taking care of the housework, keeping my grandma company and making sure she was comfortable and happy.

I really didn't mind. She was my grandma and this was one of my callings. At some point, my aunt, who was my grandma's Power of Attorney, decided that it would probably be better for everybody if my grandma went to the nursing home. She would be taken care of and I could get back to my life.

I spent most of my grandma's last years traveling the country. I would call her often and tell her about my adventures and I also came back to visit her every time my coast-to-coast travels brought me back through Oklahoma. My grandma held on, living vicariously through me, until one November day just after I had came to visit her and introduce her to a boy that I was planning to travel with. I knew that she had waited to see me again and her passing was calm and peaceful as she knew I was happy and she felt that I would be safe and protected by my friend.

After a bit of traveling, I came back to Oklahoma to stay with my mom. I had plans of working to earn the money I needed to go to school and get my LPN (Licensed Practical Nurse). There were issues with my student aid because I still owed money to one of the colleges I had attended and unenrolled from. I set my sights on getting my CNA (Certified Nursing Assistant) license, which was a requirement for getting the LPN later. This goal would also not be achieved until a few years later as a result of my gaining and subsequently losing everything.

I had gotten married and was pregnant with the only baby I have ever been able to carry to term. We were making payments on a house and three vehicles. My husband and I both had good jobs in the industrial field, so it wasn't terribly difficult for us to afford all the payments we were making, but I lost my job when I was 7 1/2 months pregnant and life very quickly began to fall apart.

After my son was born, my husband also lost his job. We spent our savings trying to hold on to as much as we could, but we had all 3 of our vehicles repossessed and almost had our utilities cut off before we were accepted into our states TANF (Temporary Aid for Needy Families) program. This program helped us make just enough to pay our most pressing bills, rent and utilities. We no longer had vehicle or auto insurance payments to make and they paid for us to go to school. My husband got his GED and I was able to get my CNA finally.

I began working as a CNA immediately after getting my certification. I work mostly in long-term care facilities, getting my assignments from a staffing agency. My husband has suffered a minor stroke and cannot work or take care of our son without help, so my ability to work is also dependent on my ability to find someone to help my husband watch our son, and I am the sole income earner for our household.

I won't say that I love my job, but I do love what I do. I love taking care of people and helping to make their lives a little better.

I would love to continue my training in the healthcare field and go on to get my LPN and eventually my Nurse Practitioner (NP) and Naturopathic Doctor licenses, but some days the struggle is so hard that I'm not even sure how the next bill will get paid and money for school is the furthest thing from my mind.

I created my account on vocal so I can start telling some of my stories and sharing parts of my life that will hopefully garner some support from those who read my writings and feel inspired to offer help, advice, or tips to make the struggle just a little less difficult to manage.

Part-time worker, full-time mom. I would love to see if sharing stories of my life as a mom or a traveler can earn extra income for my family, which consists of myself; my disabled husband, our 2-year-old son, and our four dogs.

More stories from Kitty Fox and writers in Humans and other communities.