My body. My life. My canvas

by Aaron Cortés about a year ago in lgbtq

In search for my identity as a trans man 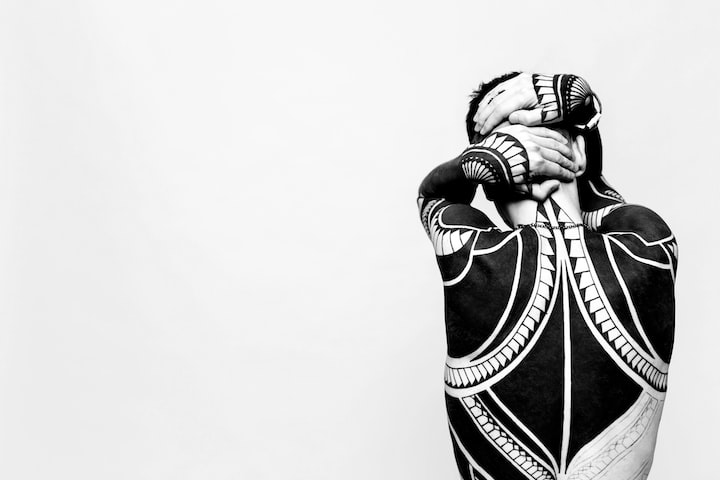 Photo by Jake Davies on Unsplash

Everybody’s concept of a tattoo is different. For some people it is symbolic, for others it is mere aesthetics; some people do it as a reminder, others for the experience. For me, a tattoo is to make visible what is inside your mind, it is to commission an artist to turn you into a work of art inspired in yourself. Tattoos are permanent and people are mutable, so to choose an image that will tell something about yourself to every person that sees you for the rest of your life it is better to choose something that expresses something so inherent to your identity that you know that it will remain unchanged as long as your flesh lasts.

I don’t have any tattoos, but I am sure that I want them. I have been seriously thinking about what I will get inked on me since I was in middle school and read in a book that there used to be warriors that instead of armor, painted magic symbols on their skins. I look forward to it as if it was rite of passage.

Growing up I always daydreamed about being a warrior. I was the typical child that would pick up a random stick and swing it around like a mythical sword while pretending to fight ghosts and monsters. I imagined myself with long, wild hair and an agile trained body, but there was a problem; people around me treated me like a girl and the concept of “girl” during the decades of the 90’s and 00’s in Mexico was painfully framed.

An adequate Mexican girl had to be raised to be a mother, that meant that she would be expected to play with small plastic babies and dream with the day of her wedding. When she grew up, she would have to try her best to be attractive to men, and for that, she should be beautiful. To be delicate and helpless was an essential part of adequate feminine beauty.

I wasn’t delicate. I was secretly proud of my male-like voice. I played with plastic insects and dinosaurs. I cringed at dolls, mostly because of people’s expectations for me to like them. I climbed trees. I learned fencing and martial arts in preparation for an imaginary future fight. I would have been a hideous girl for the standards of that time, but I wasn’t one.

I was seventeen when I got hysterectomy and eighteen when I got mastectomy. I was intoxicated with the feeling of complete liberation after experiencing how it was to be able to be shirtless in the beach. I could finally get out into the streets without the fear of rape and pregnancy that would have forced me to turn into what society had told me all my life I would turn into. But I had a problem, my whole personality was based on fighting society’s restrictions and now that I was no longer restricted, I didn’t know who I was.

I fell into a deep depression, and my stubborn determination to get into the independent Mexican film scene made it worse. I got exposed to extreme toxic masculinity during my first years of living with my real name. I felt like an unwilling eunuch. I even found myself questioning my decision about transitioning but when I realized there was no way I would have survived if I had stayed the way I was I found out that this was not exactly a gender problem, not even an LGBTQ+ problem, but a human problem. Queer people are not the only ones that feel lost and rejected, most straight people feel like that too.

I got determined to do everything in my power to survive, which in my case meant to get as away from suicide as possible. For that I had to rewind everything in my head to see where things had gone wrong, and then correct them. I had been antisocial, so I gave myself the opportunity to hang out with people, this decision brought me to know this weird girl that would become my beloved partner. I quit film-school and its toxic competition. With my family’s help, I quit the comfort zone that was my home; and then my dreams started to feel possible

Nowadays I am a writer, and I am striving to live as one. Once I reach that goal, I will commemorate it with my rite of passage, and I intend every cent that I put on that tattoo to have been gained from writing.

My tattoo will look like a tree that will cover the right half of my back, twisting itself across my ribs and my shoulder, as if it had grown hugging me. Why a tree? Well, trees are a symbol of the universe. From the Norse Yggdrasil to the Mayan ceiba, trees are the beings that connect the underworld with the heavens. They had always been bearers of mystery and magic. Celtics used to honor them as the living beings they are, Tolkien illustrated that concept vividly when he came up with the Ents. Trees inspire the most mysterious visions.

If you watch a tree with attention, you will find patterns on its bark and animals hidden among its branches. I want the bark of my tree to have chiseled runes as patterns, the whole Futhork, that way the energy of the runes will be balanced on each other. The animals living on that tree will be five so far: a lynx, a stag, an axolotl, a wolf and a bearded vulture.

The lynx is an animal that I see frequently on my meditations, often watching from a snowy peak. For me it represents the feline self assertiveness that would allow me to be at peace wherever I am.

The stag is a dangerous and strong animal, and yet, it is not a predator. Its antlers crown him as the king of the forest and ancient ethnic groups of Europe and America used to respect him as such. The deer also came to me on a meditation back when I was beginning to learn about heathenism. It was hidden in the foggy forest of my subconscious.

The axolotl took me by surprise. It started to make its way into my mind little by little, first by showing itself more and more frequently through the products in the artisan’s market I used to visit back in Mexico City, then through Julio Cortazar’s short story El Axolotl, where they are depicted as incomprehensible alien-like creatures with another level of consciousness. Axolotls never reach adulthood, and they can regrow a whole lost limb. Somehow, I feel that the axolotl inspires me to heal and to be at peace with my hormonal situation.

The wolf is a very classic animal to get tattooed for a reason. Wolves have always inspired people’s imaginations with their wild yet social nature. They represent independence and company at the same time. They are loyal to each other, and yet, they own nobody. For me, the wolf is an animal that somehow represents love.

Lastly, the bearded vulture strikes me as what a real phoenix would look like. They break bones and use them to paint their feathers. They are, in a way, doing the same we do when we get tattoos. When I look pictures of them, I can also imagine them as dragons. I yet have to know why they amaze me so much as to choose them to inhabit my tree, but I am sure that life will show me soon, just as it has shown me symbols of what lies within me before, maybe when the time for the tattoo comes and I get my own body decorated like them.

Read next: Meant to Be