by Tyler McFadden 5 months ago in humanity
Report Story 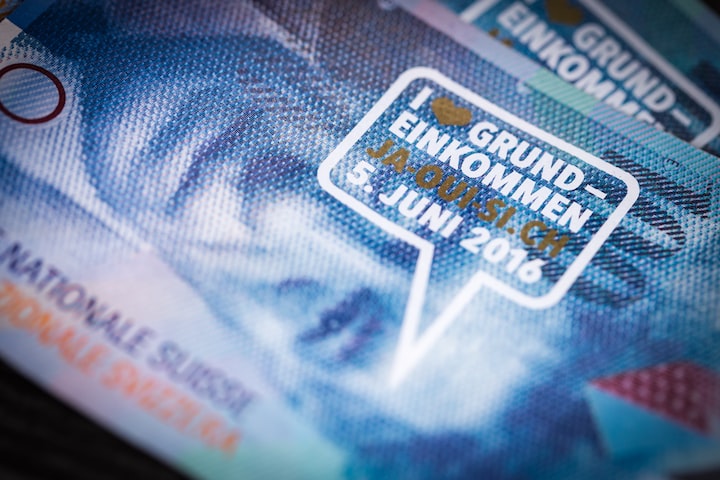 Photo by Uwe Conrad on Unsplash

Universal basic income, or UBI for short, is a topic that constantly comes up in modern political discourse. What is it? Well, according to investopedia, "Universal basic income (UBI) is a government program in which every adult citizen receives a set amount of money regularly. The goals of a basic income system are to alleviate poverty and replace other need-based social programs that potentially require greater bureaucratic involvement". The idea of a basic income for all members of society goes back for centuries, even when it comes to recorded history. One of the most well-known works to include the idea of a UBI for members of society is the book Utopia written by 16th century English philosopher Thomas More. Many proposal vary in size and a lot of UBI programs are designed to work on the country or multinational level, which makes the program and attempts to calculate how much money is needed for each citizen somewhat difficult. However, there are some who suggest that UBI might work better if it is calculated on a more localized level to adjust for a local population's needs. That is where the concept of local basic income comes in. This form of UBI is focused around providing income for citizens on a level smaller than a nation or multinational union, giving people money on a village, city, distinct, province, or state-level. Village, city, or state officials decide how the UBI is calculated and decide how to provide resources to members of their community.

One of the settlements that have a form of local basic income is the settlement of Omitara in the African country of Namibia. It is a small location in terms of population since only a little over 1,200 people live there according to recent census data on the settlement. One of the few notable things about the settlement before this experiment was that it has a train stop for the TransNamib railway there and is adjacent to the village of Otjivero. In the years 2008 and 2009, Omitara and Otjivero were used as experiments for the Basic Income Grant project which gave every person under the age of sixty are given 100 Namibian dollars a month. After implementing the program, it was discovered that poverty-related crime, malnutrition rates among children and school dropouts decreased since the start of the project. The program continues to this day with support from the Waldensian Church in Italy.

Another form of local basic income exists in the United States, but only on a smaller state level. In Alaska, there is a form of UBI called the Alaska Permanent Fund or APF for short. It was established in the state of Alaska back in 1976 and added to the Alaskan constitution. On average, this form of UBI pays each resident $1600 US Dollars annually from oil revenues and revenue from minerals mined in the state of Alaska. Many authors, pre-2021, described the APF as the only example in North America of some form of basic income in practice. A state-owned corporation called the Alaska Permanent Fund Corporation overlooks the APF and uses a very basic equation to calculate how much people are paid each year:

This form of local basic income has also had a positive effect on the state with a 2018 study finding that "dividend had no effect on employment, and increased part-time work by 1.8 percentage points (17 percent)... our results suggest that a universal and permanent cash transfer does not significantly decrease aggregate employment". Another study from 2019 found that there was a 8% decrease in property crime thanks to the APF with no changes in violent crimes, so crime went down due to this form of basic income.

More stories from Tyler McFadden and writers in Humans and other communities.