by Cheryl E 10 days ago in humanity

February 29th has a rich history with romance.

Most people assume that Valentine’s Day on February 14th is what makes the second month of the year a time of romance. There is another event that takes place in the shortest month, but only comes around every four years. On the 29th of February during Leap Year there is a special occasion that young people may not be familiar with. This auspicious observation is called Sadie Hawkins Day and once upon a time it used to be quite a big deal. Sadie Hawkins came from the mind of cartoonist Al Capp in his classic hillbilly comic strip Li'l Abner. Many baby boomers grew up reading about the escapades of the hillbillies on weekdays in the new paper on a page that was just for comics and was known then as the funny papers. 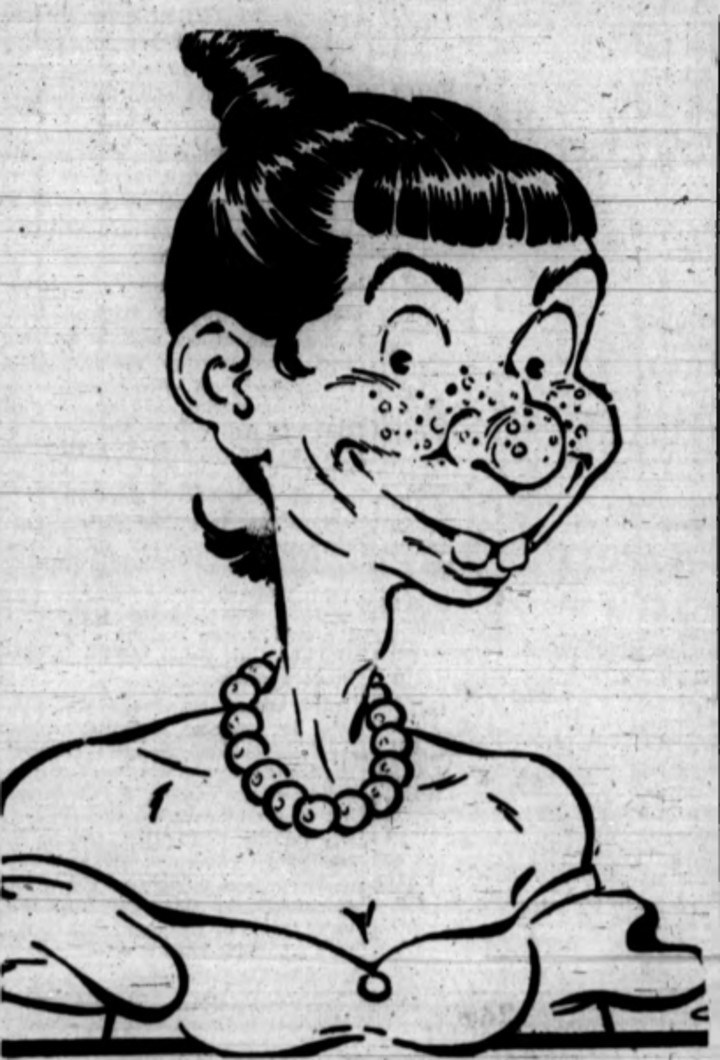 The cartoon strip about Li’l Abner and his friends ran in newspapers from 1934-1978. One of the characters in this comic was a young woman named Sadie Hawkins. She was considered to be so ugly that no man wanted to marry her. These were the days when proper young ladies waited for young men to ask them on a date, to dance and for their hand on marriage. Sadie Hawkins lived in the town of Dogpatch and her father, Hekzebiah Hawkins decided he had to take action so his daughter would not end up an old maid. He came up with a sure fire method that would get his daughter hitched.

On November 15th of 1937, Al Cap introduced something into the comic strip that became a reality one year later. He wrote into the Li'l Abner cartoon that when Sadie was 35, her pa was worried she would end up a spinster and decided to do something about it. Mr. Hawkins called together all the eligible bachelors of Dogpatch and declared a "Sadie Hawkins Day". Hekzebiah decided to decree a foot race, where his daughter would pursue the single men. The first male that she caught would be her spouse. John Johnson was Sadie’s catch and the idea caught on with other single women in Dogpatch. 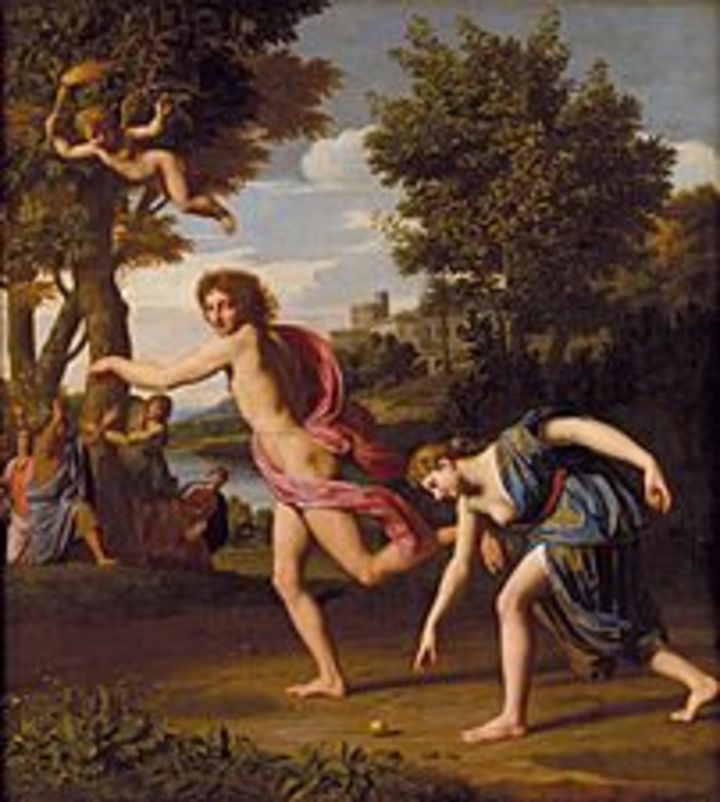 Atalanta and the golden apples

Some believe this idea came from the story of Atalanta in Greek mythology. Atalanta was a swift runner who determined not to marry. Her father desired a grandson and held a race where the man who caught his daughter would gain her hand in marriage. Hippomenes sought help from the goddess Athena who gave him three golden apples. Each time he caught up t Atalanta, he threw an apple on the ground and she could not resist. Each time she reached for an apple, it slowed her up and he won the race an his bride. 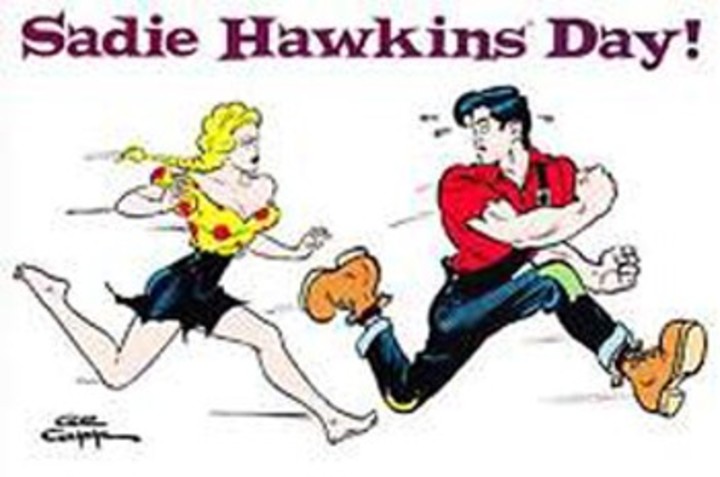 Women marry the man they catch

The town spinsters decided that Sadie Hawkins Day should a mandatory annual event, but the bachelor’s of Dogpatch disagreed. It was decided that if a woman caught a single man during the foot race and dragged him, kicking and screaming, across the finish line before the sun went down it was lawful that he had to marry her.This race took place on the comic strip every year after between November 19th and the 30th. In Novemberof 1938, one year after the first comic strip foot race, schools began holding Sadie Hawkins Day dances where the girls asked the boys. This carried over into television programs such as The Andy Griffith Show where young ladies asked the young men to a Sadie Hawkins social function. 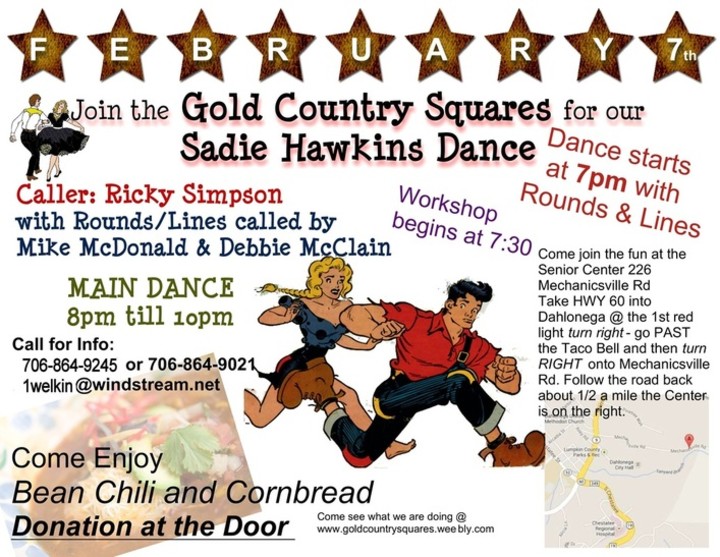 There is nothing recorded as to a specific date when February 29th became associated with Sadie Hawkins Dsy, but tradition holds that during Leap Year it is acceptable for a young woman to propose to a young man. I can recall on most Leap Years, my grandmother would say it was Sadie Hawkins time and women could pursue men. During years where February only had 28 days, my grandma would frown on young girls who seemed to be chasing my brothers. If they called a lot or showed up at the house, she would say under her breath that it’s not Sadie Hawkins time. Older people held on to the values they were raised with and attempted to pass them on to younger generations. 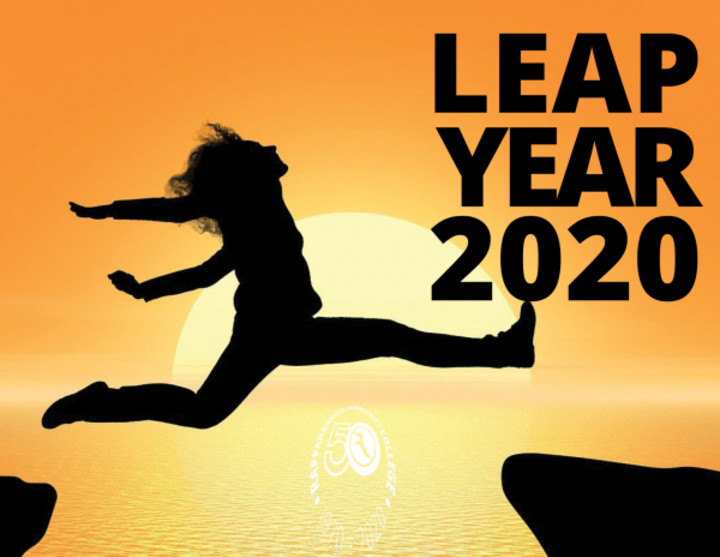 In those days, as mentioned earlier it was the boys who initiated phone calls, house visits, dates, and proposals. It was practically unheard of for girls to ask boys out, except to invite them to the prom. Things have changed In our society since that time but for those who grew up with these traditions, they are fond momories. The Al Cap comic Li’l Abner was fun to read , especially during the Sadie Hawkins Day race. The animation of the men would be drawn with them bent down and their legs far apart as if they were running for their lives. In truth they were because they did not want to he caught.

Cherylhas been writing poetry and stories and poetry since age 12. She was also a newspaper columnists for 10 years. She is an advocate for natural cures and a licensed minister:

See all posts by Cheryl E →