by Luna Lee Bear 2 months ago in science
Report Story 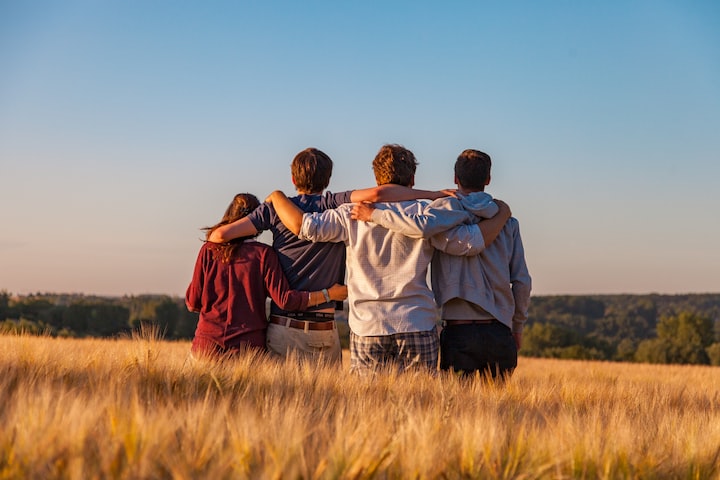 Photo by Dim Hou on Unsplash

As promised, here is the first part of my thesis about kindness and community empowerment.

I chose to not copy the whole first chapter here as it is quite long and dense of concepts.

A few things to note, while I will keep my reflections for the end of the chapter:

- My references are now quite old, but equally none of them have been disproved to my knowledge. I have kept quite up-to-date with these topics over the years, and I feel like I would like to review my sources but that there isn't a tremendous need for that currently.

- I am translating from Italian, and while I am quite comfortable with English I don't often have to write in such a formal manner. I hope it is clear, and I welcome any observation.

I will begin this discussion by explaining the terms that will be mentioned most frequently: Kindness and Community Empowerment.

The first is a simple word, which contains many meanings deeply inherent in personal growth and social networks.

In turn, community empowerment studies often use terms such as awareness, sense of belonging and respect, deeply linked to the concept of Kindness.

For the purposes of my research, I will also include in the explanation the connections between the concepts I explained and social work. I will also explain why I believe that promoting Kindness can be an approach to the empowerment process.

If a child asked us what it means to be kind, most of us would start by talking about a series of acts to be performed, but few would be able to identify what must happen within each of us so that this behaviour is not superficial, forced, or dictated by guilt.

As for the work of Social Workers, their professional actions cannot be defined in terms of kindness (given the precise nature of deontology and State regulations). However, we will see that many of the "qualities" of kindness recur in the action of social workers and are often their initial motivation.

To explain these characteristics I will refer to the description of Piero Ferrucci, Philosopher and Psychotherapist, who wrote "The Power of Kindness". This book lists the 18 qualities of the kind person taking cues from many new studies available on the subject. Ferrucci does not aim to impose an absolute definition but to illustrate how many important and fundamental qualities are connected to Kindness and dependent on it.

My contribution to this description will be to add the reasons why I believe that "teaching" Kindness to the community has positive implications on social well-being, not only on that of current or potential users but of the community as a whole.

From Ferrucci's long list, I thought it was necessary to deepen 6 characteristics, those that will come to mind most often when reading. I used the English version of the book because that is the same language in which most of the material on this subject is written, and it was thus easier for me to reconnect the keywords. The book was originally written in Italian, with the title "La Forza della Gentilezza" (The Power of Kindness).

At the beginning of his book, the author wonders if honesty and kindness can coexist, since the former is often "uncomfortable", while the latter is connected in our mind to warmth and comfort2. Quoting psychologist Sydney Jourard, Ferrucci explains:

"Honesty exists in both directions- in our interaction with ourselves and with others [..]. But we can hardly know ourselves in isolation we must first let ourselves be known by someone else, without bluffing or hiding. For Jourard, all neurotic symptoms such as fear of leaving the house or depression, are nothing more than screens we erect in order to hide ourselves to others. As soon as we become more transparent, we start to feel better ".

(1 Piero Ferrucci, The Power of Kindness: The Unexpected Benefits of Leading a Compassionate Life, Tarcher/Penguin, 2007 2 Ivi.pg.16 )

Honesty, however, does not only concern the difficult aspects of life, but also the pleasant and creative ones, says Ferrucci.

Aspects such as tenderness and kindness, in fact, are sometimes not shown in order not to feel rejected or ridiculous, and we prefer to seem a little cynical and not so dangerously exposed. This separates us from our truest part and makes others unable to see it too

From the point of view of social workers, not only are users not always able to be honest with them, but they are often forced to erect barriers between themselves and others because their discomfort creates shame and a sense of isolation.

This does not just happen to users of social services; there are an incalculable number of people who hide discomfort, together with a substantial part of their humanness.

It is important for a community to share resources and problems in a sincere way so that those who are carriers of malaise are no longer anonymous, but people with unique and particular characteristics that go beyond their sufferings and defects in the eyes of their fellowmen.

Costantini, in an article for the New Pathological Dependencies Network, talks about a consumer society that creates false needs and removes responsibility for their actions, because everything is obtainable through money and, more importantly, anonymously.

In an example of the use of Viagra among young people, the psychologist says: "This drug has often been recommended and prescribed even to the very young, as a means of alleviating performance anxiety. In addition to this, it lacks all the emotional and relational “cost” that is responsible, determined by its purchase, in the pharmacy or in another store. This is also cancelled because the drug can be purchased anonymously and comfortably from home, thanks to the order via the internet with a credit card ".

Imagine what would happen instead if the boy in question knew he was part of a non-judgmental community, which rewards honesty with understanding and help. You can't expect him to go and talk to everyone about his problem, but he could more easily ask the pharmacist for advice for example. Or, if the function of the consultors was more known and publicized, he could make an appointment with a professional. If he had then participated in an information campaign on the subject that caught his attention, he would probably also have known what the consequences of using the drug at an early age are and would not have even thought of trying.

Contact with the other is a way of enriching oneself, to discover the "possible worlds" described by Marianella Sclavi as "the arcs of possibility that we take for granted and of which we are not aware".

It is also one of the assumptions behind both kindness and social work. Both things cannot exist without contact between two (or more) human beings who relate to each other, even if minimally. This closeness can sometimes be frightening because, like honesty, it presupposes an openness on our part. This fear certainly increases in the presence of other problems, especially in the case of forms of discomfort (pathological or not) that directly affect interpersonal relationships.

"The fundamental discovery of this discipline is: we are programmed to connect. [..] This neural bridge leads us to influence both the brain and the body of each person we interact with and vice versa."

The author explains in the following pages how interactions can spread emotions in the same way that a virus propagates. Neuroscience has also identified with extreme precision the benefit, not only psychological but also physical, that it derives from even the most superficial positive contacts, while negative ones can “act like a poison in our body” .

A community will therefore be healthier as much as it can "convey" positive emotions. The most obvious problem, also highlighted by Goleman, is the weakening of social ties. It may be added that those who could benefit most from human contact are almost always those who tend to avoid it the most, while those who are naturally in charge of it have no problem forming relationships.

This concept was also expressed in Italy by Franca Ferrario, an expert in professional methodologies, who states:

"[..] a disrupted community is a factor in accelerating problems, while an animated and qualitative territory presents itself as an area that works as a preventive filter, ideally capable of considering one's own problems and involving them ”.

Having made these considerations, I see in the Social Service the institution capable of bringing together the knowledge of the resources on the territory and the problems of the people who live there, bringing them together to help the members of the community to meet to create healthy relationships and constructive.

Ferrucci highlights in the sense of belonging a duality that most of us experience in being a member of a group or a community:

“[..] being part of a group or a community gives many benefits. It makes us feel recognized, allows us to interact with others, and defeats the terrible spectre of loneliness. Yet, it often exacts a toll [..]: belonging to a group may oppress spontaneity and freedom of expression ".

We could see unbridled conformity (a keyword of our day), as proof that the sense of belonging is so fundamental that, to prove it, one can follow any fashion and pursue any idea as long as it makes us part of a community of our fellow men. What interests us here, however, is the quality of the group to which we belong.

A community that practices kindness makes it automatic for most of those who belong to you to practice it in turn. This means that the weaker elements of society are supported, and that diversity is understood as uniqueness, and not as discord.

Even a comparative study between Mumbai and Stockholm has highlighted three issues for community empowerment common to these two infinitely different societies, and one of these is the lack of collective identity.

"A common experience among informants from MWE and Tensta was that people in their respective neighbourhoods experience a feeling of not being part of the established society. [..] Collective identity is multidimensional, contested and concept and often ambiguously defined (Eder, 2009; Opp, 2012).

This has been used by several theorists and researchers to study different phenomena relating to various groups (Ashmore, Deaux, & McLaughlin-Volpe, 2004).

The concept is often defined in terms of the socio-political-economic affective connection that one has as a member of a broader group (Polletta & Jasper, 2001). This article relies on a broad conceptualization of collective identity that is linked to the identification of individuals and/or small groups of individuals with broader communities for the purpose of nation-building and for having an inclusive society.

This task in Italy and, as I believe, in the world, certainly cannot be delegated in its entirety to the Social Service, but an increase in energy is desirable in the enhancement of the individuality of people not only within a path of help but in a continuous and targeted manner on the entire social fabric.

Tune in next time for the rest of this chapter. Thank you for reading!

Piero Ferrucci, The Power of Kindness: The Unexpected Benefits of Leading a Compassionate Life, Tarcher/Penguin, 2007 2 Ivi.pg.16