In A Different Life.

by Monika Brzostowska about a month ago in love

Short Story - Fiction - Love Even In The Dark. 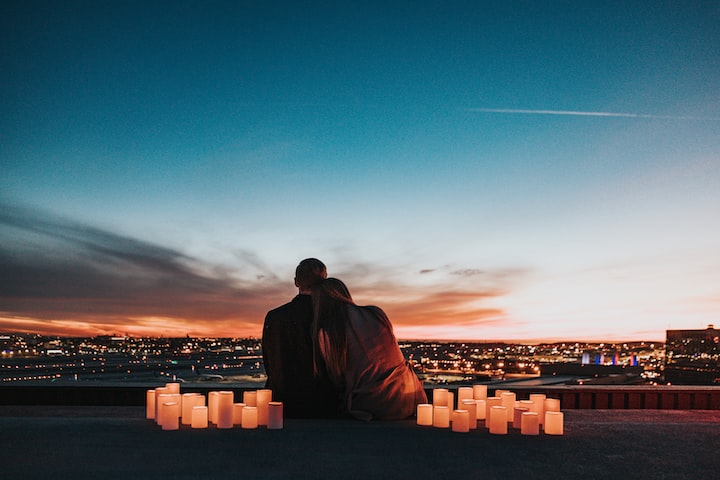 Christopher and Melissa never planned to meet, let alone date, but life has a funny way of bringing people together. They were both heartbroken after their relationships ended. Feeling betrayed and angry, they bonded over their shared pain. But it was only by crazy chance that they were able to do this. Melissa was dating Christopher’s friend Brandon. They weren’t very close, but they did know each other growing up and often hung out at the same events. Christopher had his own girlfriend, Ashley. Melissa had seen her around, but never bothered to speak to her. Until one day when Melissa and Brandon decided to go hang out downtown and saw that Christopher and Ashley were fighting. They were screaming at each other and began approaching Melissa and Brandon’s street until they were right next to them.

Christopher was screaming at Ashley - “I can’t believe you cheated on me with my friend!”

Melissa grew very worried, which friend was Christopher referring to. Could it be Brandon? Could Melissa’s worst fear have come true?

“I cannot believe you cheated on me with Brandon!” Christopher yelled while punching the car in front of him. He was normally a very calm person, but understandably his anger had gotten the best of him.

Melissa’s heart sank and she turned to look at Brandon. “Did you cheat on me?” Melissa asked him. Brandon remained quiet.

“He did, didn’t you Brandon! Tell us the truth!” Christopher screamed at Brandon while holding him against the wall.

“I can’t believe you did that!” Christopher and Melissa simultaneously screamed at Brandon.

Ashley was sitting on the sidewalk crying.

Christopher looked at Ashley and said “I’m done with you. Lose my number.” Then he grabbed Melissa’s hand and guided her away from Brandon.

“We don’t need you. You two deserve each other.” Christopher said to Brandon and Ashley.

Melissa was still in complete shock. She couldn’t speak, but she took Christopher’s hand when he gave her his and she decided to follow him. Wherever he was going was better than being there with them.

And that’s how their love story began. While their former relationships crashed and burned, their relationship was born.

“Where are we going Christopher?” Melissa finally managed to speak.

“Does it matter?” He replied.

“I guess not.” Melissa said while looking at the ground with tears streaming down her face.

Christopher gently picked her head up with his hand. “Hey, they should be the ones crying, not you,” he said softly, looking into her eyes.

Suddenly Melissa forgot who Brandon even was. She was swimming in Christopher’s beautiful blue eyes.

“You’re right. Screw them. We’re better off without them.”

“Okay great. Now that we’re on the same page, let’s go do something fun!”

“Anything we want.” Christopher said with a big smile on his face.

“Anything.” Christopher replied and winked at Melissa.

That was the beginning of two years of fun, adventure, love, and healing.

It was amazing and beautiful.

Eventually life happened and they had to separate.

They didn’t want to but they knew that going their own directions would be better for them both.

That didn’t mean they didn’t love each other though. Their love remained even after many years of being apart.

Melissa and Christopher always said to each other - “In a different life.”

In a different life they were still together, married with children, and happy.

In this life, however, they had to love each other from a distance. Watching the other grow and smiling back at the youthful adventures they had together. At the memories that would forever sit in their hearts. Always thinking... "In A Different Life."

I have a few companies of my own and am working on my Master's Degree in Govt & Politics with a focus on International Relations/International Law.

I have always loved writing. I hope you enjoy what I write!

See all posts by Monika Brzostowska →