by Savanna Moore 10 months ago in humanity
Report Story

An essay on how/why homelessness is a social problem. 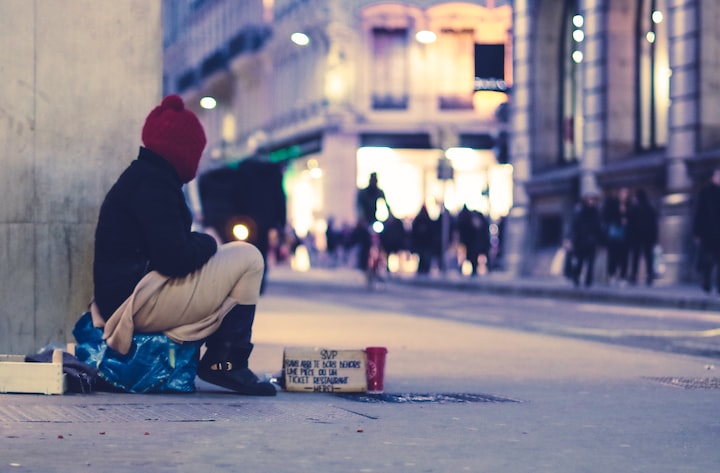 Photo by Ev on Unsplash

You can walk down the streets of New York City or Boston and pass by hundreds of homeless people, with nothing but a tent and raggedy clothes that rarely keep them warm. Homelessness has been a problem and is still an ongoing problem, many of which believe these people do not need any help. However, I will be discussing how and why homelessness is a social problem and possible ways it can potentially be reduced.

Homelessness is a phenomenon that is present in all modern societies; it is a form of social exclusion, poverty, discrimination, and marginalization (Ana Lj. Bilinović Rajačić Et.al.,1455). Homeless people are often outcasted from society, often because of the stereotypes put on them. Such as, “homeless people are drug addicts”, or “never give a homeless person money because they will just spend it on drugs”, etc. Which in some sense, may be true, however, many of these people do not want to be in this situation and are out there begging because everything else has failed to help them. Homeless people often seek for shelter, and there are many housing facilities for them, but most of these facilities are unbearable to live in and often cause illnesses. Homelessness is an integral part of the housing system and is viewed as “from home to homeless” (Ana Lj. Bilinović Rajačić Et.al., 1456). Homelessness does not just include lack of housing, money, a job, etc., but it also includes physiological, emotional, territorial, ontological, and spiritual problems. For example, lack of comfort, lack of love, lack of privacy, lack of rootedness in life, and lack of hope (Ana Lj. Bilinović Rajačić Et.al., 1456).

People who go homeless have either one or many reasons of how they ended up in that situation. Many of them are left homeless because of a mental illness, raised prices in housing, debt, unemployment, divorce, etc. Many people who are comfortable in their life do not understand these factors, instead they see it as the person who became homeless is at fault. Homeless people were seen as deviants, maladjusted, social parasites, alcoholics, and vagrants from the beginning of New Age to the 1960s (Ana Lj. Bilinović Rajačić Et.al., 1457). Other people believe that people who become homeless due to shortcomings or failures that is not necessarily their fault, therefore they believe the homeless should be provided humanitarian assistance (Ana Lj. Bilinović Rajačić Et.al., 1457). Many homeless people do not have the ability to transition back into society without any help. Assistance is viable to help these people get jobs and housing if they want to reduce the number of homeless people in the world.

As I have mentioned before, the stereotypes that are put on the homeless make it harder for them to get assistance and to get a job. If you go into a major city and go to a community and see a bunch of homeless people, you are going to see warn out tents, dirty clothes, greasy hair, junk everywhere, etc. They are not given adequate supplies for a suitable living; therefore, they look grungy and unclean. Many people see the homeless as gross and would rather stray away from them, because people do that, we are unable to aid. We often forget that the homeless are not as educated or knowledgeable as people who go about their day to day lives. The homeless most often forget how to clean themselves, pay taxes, get a job, or write a resume. If we do not provide assistance to help educate them, how are we supposed to solve this worldwide social problem?

The aim to give services to the homelessness is to not only ensure the people attain a secure home, but that it is a pathway to wider social inclusion (Julie Christian et. Al., pg. 1). However, because we do not know the extent of the many mental illnesses homeless people have, we do not know if it will entirely work. Findings in a study suggest that it is important to focus on intentions as a relevant outcome of interventions. The beliefs one might have about interventions can break the link between past behavior or habitual service use and future service use (Julie Christian et. Al., pg. 1). Focusing on the behaviors and mental illnesses of the homeless, it can help find better solutions of what intervention will work for them and bring them out of social exclusion.

An estimated 1.6 million people, including more than 300,000 children are homeless part of the year (unknown author, pg. 60). We see many homeless people across the globe and across media, yet we never do the adequate work to help transition them out of that situation. Many people have different beliefs on the homeless, some good, some bad. Like I have mentioned before, there are many people out there that think all homeless people are drug addicts and you should not help them. I would like to share something my friend had said to be about her input on the homeless. She stated that she “doesn’t not see a lot of homeless people here in New Hampshire, but when I do, I always try to give them whatever I may have on me; food, water, money, etc.” She provides the homeless whatever she may have on her, no matter how little, and that should be a start to helping them transition. She had also stated, “New Hampshire is well known for its opioid crisis, so being raised here with that, my parents told me from a young age that I should never give to the less fortunate, because they were ‘probably on drugs’, and that whatever I give to them, it will go towards drug money.” That is one of the many stereotypes given to the homeless, and that should never be a perspective one has on the homeless. Enabling that idea into everybody’s heads will only systematically keep pushing people who are in need of help down.

To provide and develop quality assistance and support to the homeless, we must first recognize it as a social problem (Ana Lj. Bilinović Rajačić Et.al., 1464). Social problems have two components to them: objective and subjective. Objective is the condition and behavior that has negative consequences for large numbers of people for it to be considered a social problem. There are large quantities of people who are homeless and unable to get a job, that is objective. Subjective is when a perception that a condition or behavior needs to be addressed for it to be considered a social problem. Homelessness is widely shown across social media and people do talk about it being a problem, that is the subjective component of social problems (unknown author, pg. 3). Now that we know the components of social problems, you can see that homelessness is indeed, a social problem that needs to be addressed.

To combat these stereotypes on the homeless, we need to understand the topic better and become knowledgeable. If people do not accept that the homeless is a part of their community and that they need help, how are we going to solve this social problem? Many people become homeless because of an issue that was either their fault or not directly their fault. We should never blame someone for being homeless and putting stereotypes on them, because we do not know their story personally. You cannot walk down the street and assume a homeless person is automatically a drug addict or assume they have illnesses, so you need to stray away. Many homeless people cannot help their situation and are unable to get back into society because there are not enough assistances to get them a job or affordable housing.

To fight these struggles and get the homeless back into society, we need to understand their back story and understand any mental illnesses they may have to move forward into putting them back into society. If there were a program to “glow-up” the homeless so they are able to go into interviews without being judged and getting a job, that would be a wonderful start. Shelters that are suitable to live in should be put in place in cities with the highest homeless population. Although many of the options that are available, they cost money, many of which cannot afford. If there was a way to offer more affordable, maybe even free, suitable housing, this could be a start into transitioning the homeless back into the world. If a homeless person has a place to stay, eat, shower, etc. at little to no cost, they would be able to search for jobs and possibly get one if their condition is not affecting their ability to do everyday tasks. For those who have mental illnesses that affect their lives should be placed in a housing where they can recover there and potentially be on the pathway to social inclusion.

Homeless people struggle on a daily basis, their good days only being when they can afford to buy food because someone was kind enough to give them a five-dollar bill. These people are living in conditions that are extremely unsuitable to the point they die of starvation, dehydration, heat exhaustion, illnesses, suicide, and/or hypothermia. We look past these people even though we can see they are living in tents that do not keep them warm, we see they are dirty and ill, yet we never do anything about it or bring light to the situation to begin helping. We are all equally the same, many going through different situations, so why do we not lend a helping hand? We have all probably been close to the verge of homelessness in rough times, or even been homeless, so we all understand the situation and we witness it. To solve the social problem of homelessness, we need to bring awareness to it and start doing something about it, many of them cannot do it on their own.

More stories from Savanna Moore and writers in Humans and other communities.