That night the ginkgo is also in the night breeze gently swaying, in the full step of the light, but like a picture of many years of secrecy and confusion. 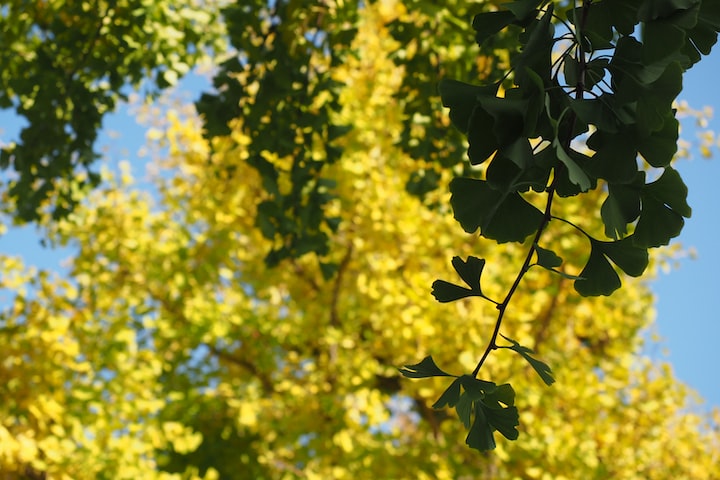 Photo by Shino on Unsplash

The moon is a strange plant, and the moon is a night when the tree is twisted with overlapping vines, and the wind blows through, and the shadows sway lightly, and there may be a slight sigh in the dark shadows, or maybe it is just the sound of birds flying in the night.

My husband has been away for more than two months. When I return from my daytime work, I am not lonely when I am tired, but when the night is late, I can't help but miss his words and smiles.

There is a huge ginkgo tree in the courtyard, very ancient, I heard the owner say that it has been many years, this place was originally a small temple. The temple decayed and disappeared, but the ginkgo is still there. But the owner of the house about the ginkgo always with a strange uneasy look, at first refused to lend, but the husband loves this place secluded, insisted on living, and character has always been free and relaxed, in the owner of the uneasy also do not think, the owner had no choice but to allow.

Live for a long time, also do not feel very special, not to mention that although the husband is an unrestrained person, deeply loves me. Every day, tea and poetry, are quite free.

But every day when I pass by the Ginkgo, I always remember the strange look of the owner of the house, and I just laugh at it: at my paranoia.

In the evening, my friend A Qi asked the village people living not far away to bring a letter to say that tonight, I asked me to make tea to wait. A Qi is a good friend from college, when I was away, I always came over to keep him company.

The moonlight outside the window is very good, the moon here seems to be particularly cool and quiet, I remember the first night I came here was amazed at the moonlight here, the husband is even more glowing. The ginkgoes that night were also swaying gently in the night breeze, in the clear light of the full steps, all unlike earthly scenery, but like a picture of many years of seclusion and confusion.

At that time, my husband was reading a book under the lamp, and I was lying on the windowsill. I occasionally looked back, I saw the moon slanting through the root of the window, sprinkled on the ground, the table, tea in a cup scattering a soft green smoke, the mouth of the cup in the light, the illusion of a round of silence and the flow of uncertainty of the halo, the courtyard wafted a faint fragrance.

It was late and Archie was still coming, so I put down my book and replaced the incense on the stove.

I put down my book and replaced the incense on the stove. My husband wrote to me that he would return in three days.

When I went to the window, there was still the occasional sound of birds flying in the ginkgo trees, and then there was silence, but I saw someone in the shadows of the trees. So he smiled and said, "Come out, your tea is cold, you have been waiting for a long time." A Qi did not say anything, but took a few steps forward, the moonlight slanting, but not A Qi, but a tall man dressed in black, he smiled slightly, still did not speak.

I exclaimed, his face changed slightly, a few steps back, still in the dark shadow. I was at a loss, but I heard a light sigh in the shadow of a tree, but the man had disappeared.

Thinking of those old stories, those bold scholar's actions, a bright idea, picked up a cup of tea from the table, went to the windowsill, and said, "Is a man or a ghost, since we have already met, why not show up, have a cup of tea." The words just fell, but I saw the man still standing in the shadow of the trees, looking depressed.

I asked, "Are you coming in?" He shook his head slightly and smiled, but the depression was visible in the color.

"I don't dare to disturb you because of the different paths." Everything is like the dialogue in chatting.

Asked again: "Then do you drink tea?" He still shook his head once.

"In that case, there are chairs in the courtyard, sit down and talk?" I said tentatively.

He did not say anything, and after a while, he walked to the stone table and sat down. The moonlight shone on him and I could see clearly that he was a bald monk dressed in black.

"You've been living here? The temple has been destroyed for a long time." I couldn't help but ask.

"Do you come out often?"

"Come out?" He looked up with a strange look and smiled: "Oh yes, I always come out at night for a casual walk." He looked around: "Everything is gradually changing, many things are...

More stories from Theda F Folkerts and writers in Humans and other communities.