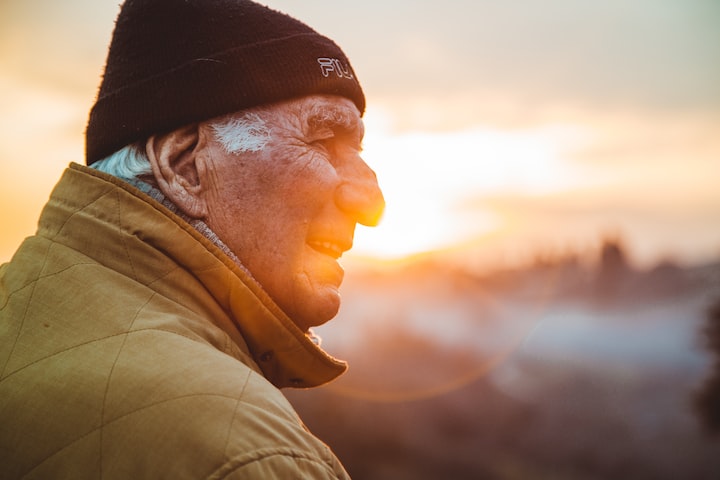 Photo by Matteo Vistocco on Unsplash

The wind was trying. It chased the flags around the poles this way and that but the flags were not having any. They simply folded over, and over again, like Tai Chi masters who would not be baited. Brown and yellow leaves trickled down from almost empty trees, skittish and unpredictable through the grey sky. Finally, the wind relented, and the flags sulked against their poles, cold and flaccid. The air had grown still, as if the world had finished breathing out and the moment was all waiting. The gargoyle birds clung to branches, with even the smallest finches and wintering hummers severe in their frozen stares. The ground dwellers, too, all stopped their raucous foraging and lay quietly down where they were, serene.

Thomas noticed none of this. His gnarled fingers gripped the handles of his walker as he glared at the cenotaph. He refused to wear gloves until December. “No matter,” he would say. His lips pursed stubbornly against the cold air, as he continued his annual silent tirade. His care-aide waited patiently behind him, “a ways,” shifting her weight left and right, desperate to be sitting down. She was bundled up like an infant, knowing that he would be there adamantly tottering for some while. She did not notice the eerie stillness, either.

Seventy-one years ago, he was just Tom, not Thomas. Raymond called him Turk; Raymond had had a nickname for everyone, but he didn't care to remember them in the scowl of his reverie. Instead, he gripped all the tighter as his gaze trembled its way, inexorably, up to the flag. His focus, though, stopped short as it often did and steeped itself into the memory: he and Raymond digging that damned Jeep out of the muck. There just had to be a better way, he thought, as Raymond shouldered into him with a wry grin. “Put your back into it, Turk!” His last words. The blast blew him up and away like a bug flicked off a dinner plate.

Thomas’s head nodded slowly up and down as he remembered, then it bobbled into a side to side shake as he pleaded quietly, “We were just mechanics.” Pieces of that Jeep were still embedded in him, wedged into his backbone in three different spots. One medic gawked and said he was a miracle. The pieces, small, but all barbed like hooks, had pierced his lamina with such precision that the tips all but poked into his spinal cord, like three deadly fingertips poised over destruct buttons. He quickly grew used to the dull, constant pain. That was the end of Raymond, and the war for Tom.

High above him, far beyond the hearing of its insect buzz, the drone hovered patiently. The animal creatures of the earth and sky waited likewise.

He did not feel like a miracle now. He never did. There was a pang in his chest, an incompleteness; he could never quite catch his breath, and he had always longed for something he just could not name. He was uncertain if that same feeling was there before the war, but he assumed so.

He found that he did not have the capacity for romantic love. This would have surprised the young Tom, but the war had beaten him into Thomas. He did not avoid friendships, but he made no effort to garner them.

He shunned leisure. His blinkered focus was work and he set about it unrivaled. Even during the war, he and Raymond had built a hydrogen-powered engine in the spare time they had, using an old manual and machining what they couldn’t scrounge. After the war, he became a simple farm mechanic, if one can call anything he did simple.

Anyone looking at his life and his work would have been astounded by its scope and utility. His first order of business was an independent 6-wheel-drive vehicle that would not ever get stuck. He made five by hand. He would have made more, but steel became too expensive. Thomas did not examine his life or his accomplishments. His was a life of working ‘til day’s end. He called it service. Nothing else he ever did held that empty feeling at bay, except the reprieve of sleep.

One block away, Stanley Elzinga considered the image on the screen of his handheld remote control. The camera of his drone, high above the park, showed the clearing and the cenotaph, with its corresponding flags. Two people were down there braving the cold. One, he knew, was the recipient of the gift. He recalled that he had wrapped it almost absent-mindedly.

“The wind has died down,” he thought. “Nice.” He squeezed the trigger to descend the drone.

It was then that Thomas noticed the stillness. His breath curdled in the air before him, poofing away in a slow motion cloud, wisps slowly swirling about, crystallizing before his eyes. He thought he must be dreaming. Bemused, he fogged the air before him like a mirror. Without thinking, he took a shaky finger and wrote his name in the air. To his surprise, he had written “Tom”. He heard the drone.

With some effort, he craned his neck around, eyes alert and searching for that last mad wasp of November. “No, that’s not right. The sound is off,” he concluded silently. He saw the drone above him, something dangling from underneath.

He marvelled as the drone descended before him, nestling a small box - gift wrapped in green with a blue ribbon - quite perfectly into his receiving palm. A mechanism clicked softly, the clamps released and the drone buzzed its way straight up and away.

Thomas inspected the gift. The lid was wrapped separately. He peeked over at Joanne. All parka and mittens, her head was bowed like she had noticed something on the ground and none of this extraordinary event. He regarded again, his eyes all a wonder, the gift in his hand. He set his elbows on the frame of his walker and opened the lid.

Stanley guided his drone back to his patio table landing pad. He disassembled the airdrop device and packed everything all neatly away into its foam and cardboard slots. He opened the back door, and took off his boots and coat and placed the boxes back on their shelf. He stood there for a moment, puzzled, trying to remember why he was in his mud room, then he turned around. The door was ajar. He would fix the latch later, he thought, as he firmly shut the door. He checked the thermostat, nudged it up a bit and went back to his vacuuming.

The world of the park breathed in. The wind nipped at the flags, teasing them once again into their martial dance. The birds took flight and resumed their relentless hunting. Squirrels scampered their riot and Joanne looked up.

“Oh,” she said aloud, with kindness and caring. “Thomas is gone.” He was sitting on his walker’s seat, head leaned back and tilted just a tad, his eyes wide open. She counted to sixty and then she walked over. She was about to dial her cell phone when she noticed his face. He looked so peaceful. He looked… she pondered for a moment. “Content. That’s the word,” she thought. “Where did you get this,” she said, as she plucked the little tin box and lid all neatly wrapped off his lap. Empty. She fitted the lid snugly on the box and noticed the small slip of paper between his thumb and finger. She reached down and gently slipped it out. On it was written, “Turk”.

M﻿y goal as a writer is to write thoughtful pieces of prose, poetry and stage plays. H﻿opefully, the end results are entertaining and engaging, with layers of meaning that make sense to the whole or a theme therein.

More stories from Ward Norcutt and writers in Humans and other communities.