by Marcus Carter about a year ago in literature
Report Story 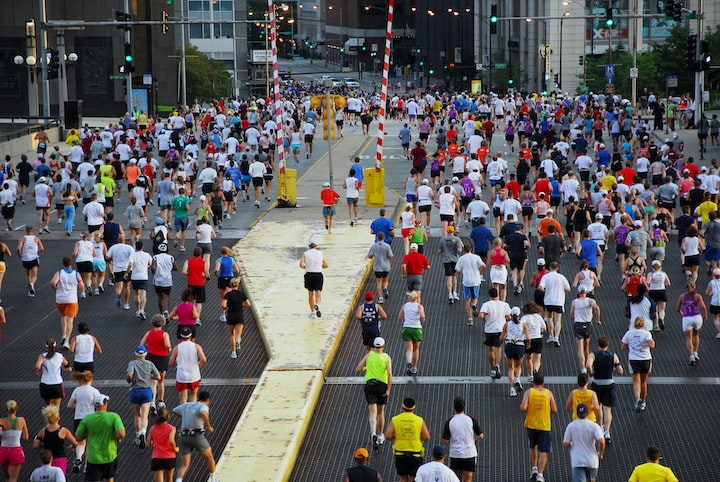 Photo by Michael Carruth on Unsplash

Michael’s flashback ends as Michael is running past The House of Blues on State Street. The race continues south on State Street, and more spectators are standing on the sidewalks, cheering on the runners as they approach the Mile 2 marker.

Willie of Great Britain is still running alongside Sarki Kipkosgei of Kenya, and Kaleb Dibaba of Ethiopia. Michael is in the middle of the pack with Nick and Walter, and he is running comfortably.

Meanwhile, at Becky’s apartment on Fullerton Parkway, she is in her bedroom packing. Becky is in the living room watching the marathon on television.

Becky- Jamie, you know they closed off Clark Street, right? We’re going to have to find another way to get there.

Becky- Jamie, I’m still having a hard time believing Michael would do that to you. That’s just not like him. Jamie, I know you hear me.

Commentator- (off-screen) Sarki Kipkosgei of Kenya, Willie Davis of Great Britain, and Kaleb Dibaba of Ethiopia leading the pack of about 20-30 men. These three in particular have a strong pedigree of marathon experience, and seven Gold Medals between the three. You have to favor Davis to win the whole thing, but it’s difficult to predict the outcome, so anyone can win.

Michael is shown on television with Nick and Walter. Becky spits out her orange juice at the sight of Michael, and she gets excited.

Commentator- (off-screen) There you have Nick Daniels and Walter Watkins, two former Olympians running together. Daniels and Watkins have run together for years, and have been a continuous threat to the East Africans.

Jamie walks out of the bedroom.

Jamie looks at the television, and she notices Michael running with Nick and Walter.

Commentator- (on television) The U.S. elite team has about 12 members. Between Daniels and Watkins… I believe that’s Michael Lewis. I don’t have much information on him. I do know he’s from Chicago, and this is his first attempt to run in the elite field, so let’s keep an eye on him.

Becky- Jamie, why are you so mad at him?

Jamie- He’s still in love with her, Becky. I’m done.

Becky- Who? Abby? What the hell are you talking about?!

Jamie stares at Becky with her arms crossed.

Becky- Fine. Do what you want. If you leave him, you’re going to regret it later.

Jamie walks into her bedroom and continues packing.

Becky- You’re wrong about him, Jamie! You’re going to regret it! I’m telling you!

Becky continues to watch the race.

Nick- I haven’t been here since… Never mind.

As Michael keeps running, he has another flashback.

The drunken Michael catches the Red Line on Clark and Division. As he is riding the “L”, he is watching couples interact. The more he watches, the angrier he gets. The angrier he gets, the more whiskey he drinks from his flask.

The train is approaching the Jackson Boulevard station. Michael gets up, and he starts staggering towards the doors. He notices people are staring at him.

Male Automated Voice- (off screen) This is Jackson.

Michael- (angered, slurred voice) What the hell are you all staring at?!

Everyone looks away from Michael. The train stops at the staton, and the doors open. Michael staggers out of the train, and onto the platform. The bell to the train rings.

The doors close, and the train leaves. Michael is staggering up the stairs.

Michael continues hopelessly wandering on State Street. He takes a flask of whiskey out of his coat pocket, and he starts drinking it. He staggers into a parking garage, and he walks up the stairs. Moments later, he stops on a flight of stairs, and he takes a seat on the floor, and he curls into a corner.

Michael- (incoherently) Abby, you little tramp… How could you do this to me? What does Todd have that I don’t?

Michael tries to stand up, and he falls. He pulls himself up, and continues to pull himself up the stairs.

Moments later, Michael makes it to the top of the parking garage, and he stares into the night. He spreads his arms open, staring straight at the dark skies above.

Michael drops to his knees, and he starts sobbing.

Michael looks to his left. He gets up slowly, and he staggers to the ledge. He takes his flask out of his pocket, and he fumbles it before dropping it 20 stories below. Michael screams in anger.

Michael falls into seated position near the wall of the ledge. He looks towards a ceiling. He starts shedding tears.

Michael slowly climbs up the ledge. He nearly loses his balance, but he regains it, and he stands straight, staring above at the sky. He looks down, and he sees the elevated train tracks covering Van Buren street.

Silence fills the air. Elevated train in the background.

Michael- Well? Come on!! Say something!!

Michael closes his teary eyes, and he spreads his arms to each side.

As Michael is about to fall, his cell phone rings, and he stumbles. Michael falls… backwards.

Michael’s cell phone falls out of his coat pocket, and it continues ringing. Michael is sprawled onto the pavement. He opens his eyes, and lets out a weak groan.

Michael looks to his right, and he notices the light beaming from the screen of his phone. He is dazed, and all he can see is the glare. He slowly reaches for his phone. Jamie’s picture appears on the screen. The phone continues ringing. He finally answers the phone.

I am an aspiring screenwriter, a marathoner, and a blogger. I love to write screenplays in my spare time, and I thought I'd share some of my work on here. Please feel free to check them out as I post, and let me know what you think.

More stories from Marcus Carter and writers in Humans and other communities.